The combined might of Hammer has been experiencing something of a collective Purple Patch this last couple of weeks. Read on to find out about some more cracking results:

Although on paper this match might have seemed straightforward – our opponents had already lost seven of their eight matches this season – as a former King’s Head man myself, I know that you dare to underestimate such a strong and renowned club at your peril.

And as I suspected, they turned up with a much strengthened team in a late bid to avoid the drop. When one sees experienced, formerly 200+, players such as Connor O’Shaughnessy and Rik Thomas on the middle boards, you know you are in for a bare knuckle fight.

Before the match, the Hammertime WhatsApp banter made jovial reference to the need for a demonstration of the Spartan “come and take it” attitude. And thus it transpired…

I think I may have inadvertently created a monster. Chris seems to have taken a distinct liking to top board, and is clearly in no hurry to vacate the hot seat. Another neat Sicilian miniature followed, presented below for your enjoyment with Chris’s lucid notes.

On board 2, Thomas was engaged in a fierce time scramble, where his extra pawn was compensated by his strong opponent’s initiative and clock advantage. Draw agreed.

Engrossed in my own game, I did not get to follow much of the play on boards 3 to 5. Bajrush, so often our match winner this season, went down, while Sylvain and Marios recorded solid draws.

The match was getting more tense with each passing minute. On six against my Richmond Juniors colleague Rik Thomas, I ventured a couple of risky moves in my favourite Grünfeld and twice briefly stood very badly. A difficult endgame finally tilted in my favour as the clock ran down. A satisfying win, and important in edging us ahead again. Check out the gory details below.

A short draw by Pavel on board 9, and a heroic, but ultimately unsuccessful rearguard action from Kostis on ten, left the match tied at 4-4 going into the final moments.

Jeremy, on board 8, kept a firm grip on his earlier advantage, steering a well played game to victory in the endgame.

So, all eyes on Paul on board 7. A fluctuating struggle seemed to be won for us, and Paul also had a vital extra minute on his clock. Alas, his opponent’s dogged resistance began to eat away at Paul’s time advantage. A Hammer loss on time seemed inevitable, until his opponent, with 12 seconds left versus 5 seconds, albeit in a hopeless position, offered a draw. Thankfully Paul had the presence of mind to accept, sparing his team mates a collective coronary. We’ve all been in such tense positions and know how logic often falls by the wayside.

So as the dust settled, Hammer had won the match 5.5-4.5. Perhaps a little fortunate, but undoubtedly a critical point in our season. We now need to make the most of this reprieve in the crucial upcoming matches. 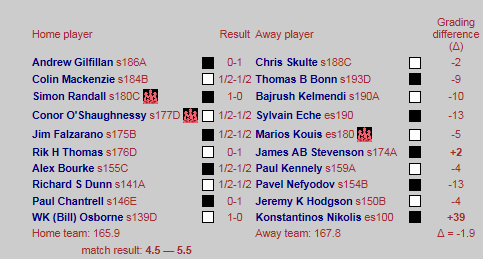 Many thanks to everyone for a tremendous effort. Particularly Jeremy and Kostis for stepping in at the last minute and performing so admirably.

The current standings in Division 2:

Ancestral Voices Prophesying War – aka a trip to UCL

In Xanadu did Kubla Khan
A stately pleasure-dome decree:
Where Alph, the sacred river, ran
Through caverns measureless to man
Down to a sunless sea.

So twice five miles of fertile ground
With walls and towers were girdled round:
And there were gardens bright with sinuous rills,
Where blossomed many an incense-burning tree;
And here were forests ancient as the hills,
Enfolding sunny spots of greenery.

With echoes of Coleridge chiming in our ears, we faced University College London in their home citadel. That all-too-familiar bastion of higher education – the Rugby Tavern pub close to Holborn.

The room smelling of un-tempered bellicose spirit, mild dread, and salt & vinegar crisps. Here, the Mongol spirit of fallen heroes would be summoned to contest our learned foes on equal footing.

We stared blankly into the abyss of a 30 ECF point deficit per board. 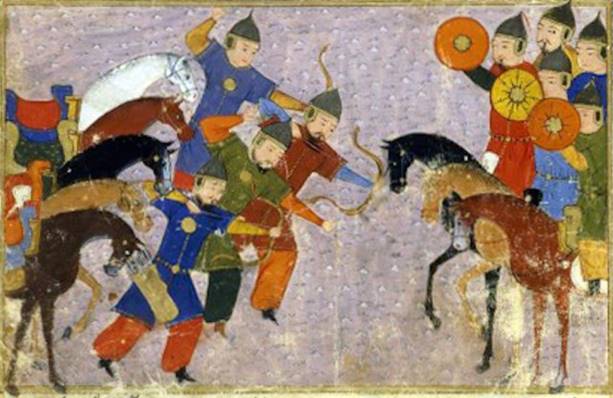 But cometh the hour, cometh the man, and Hammer were not to be outdone, fighting bravely to hold our rivals to a 4-4 DRAW. The Great Khan would have been proud.

This wasn’t a night for weak, apologetic chess, with all 8 matches proving decisive one way or the other.

The triumphant Cherbi were Charlie, Dave, Wyatt and Nick, each taking down their higher-rated opponents. But surely there was no better performance than Wyatt. Drafted into the fray only hours before battle, he ably took down his man in double quick time, ushering a humble thumbs-up as he emerged from the board.

Nick took advantage of his opponent’s ‘casual’ approach to time management, ramping up the pressure as his time slowly ticked away. Oblivious as his flag fell, it was a small matter for the Hammer man who continues his fine form since the Summer.

Proving it’s not only UCL boys who can leverage the benefits of academic advancement, Charlie’s been doing some studing of his own, veritably imbibing the sweet liquor of Nimzowitsch’s masterwork, My System. It paid dividends as he entered a seemingly even endgame, but our friend zugzwang was to scream into view, ensuring Charlie commanded the centre, and thus the game. Beautiful takedown.

Your captain benefitted from an overly aggressive pawn push in the opening which allowed an e4-e5 counterthrust. With the Rook now under attack, material loss was inevitable, an advantage that persisted into the endgame. The game is presented here.

Our fallen heroes numbered 4 – Tommaso, Matteo, Brian and Paul. Their bodies burned away on a pyre of leaden ash, their souls ready to return to fight another day. Tommaso reached an endgame with Bishop and pawn vs. Rook and pawn. Tricky to defend, but even more so when you have 15 seconds left, and you’re facing down a 200 ECF. It wasn’t to be – the extra seconds may have counted as the post-match analysis suggested a draw may have been lurking in the mire.

Matteo and Paul had nights I suspect they’d rather forget. Paul confessed to never having gotten going, stumbling into unfamiliar territory against the London System, and Matteo was left to rue what could have been after reaching a promising +1.0 position against his much higher graded opponent.

I’ll leave you with Brian and his most unfortunate loss. Again, time played a crucial role here – the material advantage was there, but it’s hard to close out when time is short. Brian has also kindly annotated the game with some of his post-match thoughts.

We ride again on Tuesday 19th against Greater London. More of the same please…!!

Another cracking night of chess action – with Battersea manoeuvring themselves into contention, The Crazy Gang remaining undefeated, and Hammersmith finally getting off the mark.

Yes, the midway point of the 2019 Hammersmith Rapid League is starting to take shape, as we approach the business end of the tournament.

After a first-round hiccup the Frenemies are back with a vengeance. With a winning score line of 7-1, with no draws against Hackney. Tremendous performance from the team – here is the scorecard:

In some ways the Lions have not had the rub of the green in this tournament, and that trend continued against the 100% Radars.

The match card does not tell the full story and the win could have gone either way – this was edge of your seat stuff – or is it that these kids are just damn good?

This was a close encounter but plaudits to the Radar lads who kept focused and keep on winning.

Both teams had much to gain from victory here – Hammersmith to get on the scoreboard, and the Tigers to maintain their 100% records. Something had to give – who would blink first?

Hammer Captain Kostis shuffled the pack and gave season debuts to Ben and Jakub. The Tigers were men down with no Nadhmi and Connall available they had to call up the reserves.

A tight match was the outcome but some highlights – Ben despite being a piece down in one game still won. Nick Rutherford went 2-0 and Taymour with outs.

So, at the midway point the cross table and league table are given below. Round 4 was up this Tuesday, with many things on the line – watch out for that report soon!

Will Football Radar be halted in their tracks? Can Battersea maintain their form and push for the title? Have the Tigers peaked too soon, and will the Lions get a break? Will Hackney find their mojo? Is the Hammer revival or real?

All these questions and more will be revealed after Round 4 -stay tuned!

One thought on “Solid as a Hammer”