It’s been a while – once again – but we’re back for another installment.

Our previous puzzle back in June was an interesting one. With Black to move, there doesn’t appear to be anything decisive…. Dig a little deeper though, and you can see a neat combination that allows Black to pickup the White Knight hanging on d5.

Paul takes the plaudits for this one, with Black to move 1… Nxf3, 2.exf3 Bg2, [threatening to take the White Rook] 3.Rg1 Bxf3+ [checking White, and allowing the Bishop to take the Knight for free on the next move]. Tidy.

Up next is this beauty – White’s move, with spaghetti all over the board. Solutions in the comments as usual please: 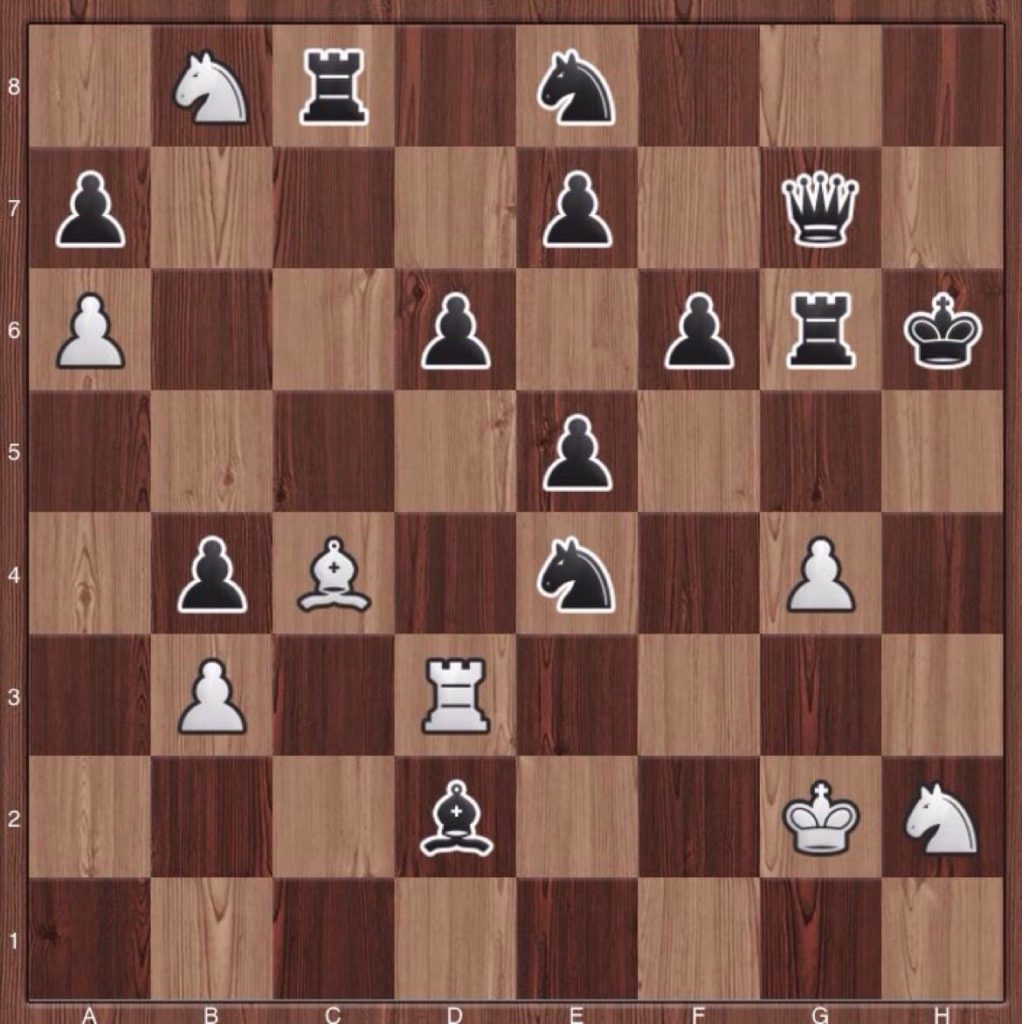 Week 4 of the Summer Chess League saw our two Hammersmith teams facing something of a tough time.

Full results and all the games are available on the Summer Chess Website: http://www.summerchessleague.org.uk/week-3-games-all-the-matches-move-by-move-2/

It’s well worth a look at some of these tussles – great opportunity to click through & learn, particularly from some of the stronger games.

As if that’s not enough, Hammersmith’s very own Adam Cranston features in the Game of the Week, an accolade meaning that the Ginger GM – Simon Williams – gives his full, 30-minute analysis of the game. That full analysis is available here on YouTube – well worth a look:

Doubly interesting too, as Adam is a practitioner of the London System, something the Ginger GM is a huge proponent of – he’s released a number of DVD’s and lots of training material on the system. Enjoy!

Last week, the club descended on The Albion for a night of rapid play. The competition was hugely varied – members, non-members, graded, un-graded, and from serious club players to beginners, all showed up to play.

Everyone was to play two games to be submitted to the July 2018 grading list. The lineup looked like this: 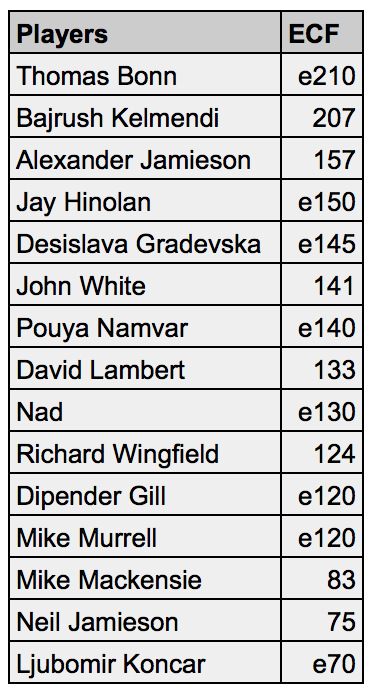 Round 1 threw up a few surprises. Potential new member, Nad, scored a fine win over John. While a blunder from Pouya allowed Mike Mac to capitalise.

The last game to finish saw Richard take out arch-nemesis Dave in a game that went right to the wire: 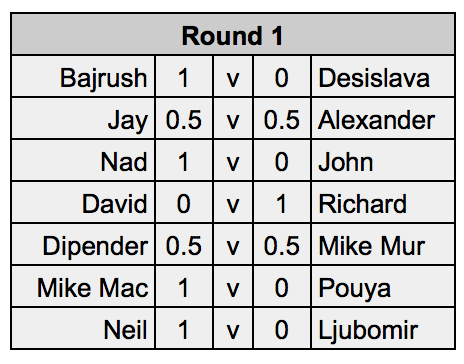 With tiredness setting in, there were a couple of dropouts for round 2. The highlight of the round saw Desislava taking Thomas right to the wire, missing a tricky win at the end and ultimately losing: 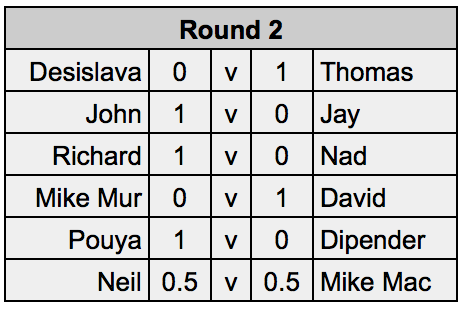 When the dust settled, Richard was the winner on the night, with 2 wins from 2. An honourable mention to Desislava, who played two good games against players graded over 200! 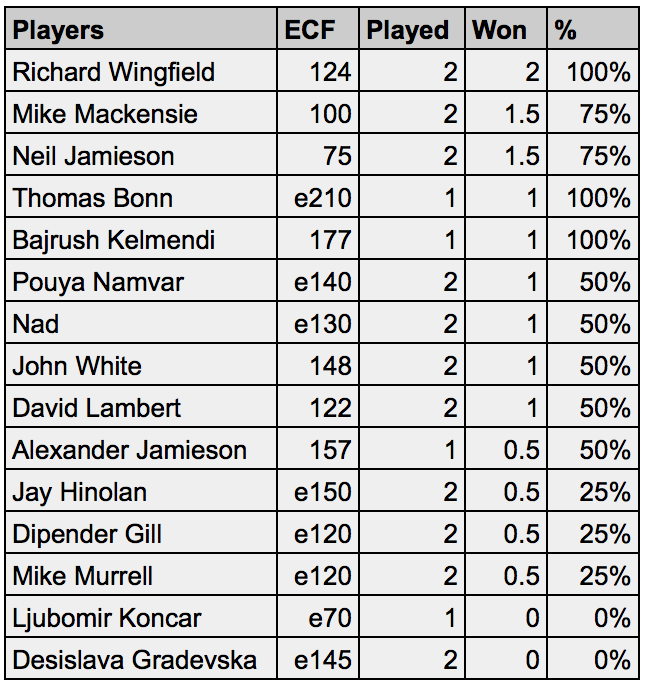 An enjoyable evening surely to be repeated in future!

Last night, Carsten hosted his second much-anticipated training session of the Summer. He played through three games of Chris Moore’s on the demonstration board, explaining common themes and describing Chris’s progression over the past two years.

It was a very well-attended and enlightening session. We look forward to many more in the future!

Next week the club is “officially” closed for the Bank Holiday. However, all the equipment will be at The Albion and no doubt there’ll be several members using it – we’d love to see you there.

This will be followed by our final two weeks at The Albion, starting with a session on September 4th from Matteo “Suit” Bezzini, going through the intricacies of the Caro-Kann defence:

The Summer season culminates on September 11th with our Summer handicap blitz tournament, with prizes to be won! Save the date!!

Looking at the last ECF grading list, the Hammer star turn has undoubtedly been Chris Moore, who has improved his grade over 2 years from 88 to 121, which means the Chris of 2017 would score 80% against the Chris of 2015 – if you believe the grading system!

This is particularly interesting as Chris was in the same situation as a number of other new (and newish) members of the club, who have all played some social chess before and are certainly not beginners, but on the other hand are not used to facing experienced club players regularly.

Chris has successfully bridged this gap in a short period of time, and in this session we will look at how his play has changed to achieve this, together with some suggestions regarding where he could look to improve further.

There will of course also be some concrete chess analysis, with a bit about opening theory and discussions of both positional and tactical themes.

Our top player Carsten Pedersen (206) will be hosting the session – See you there!

The Southern Counties Chess Union (SCCU – catchy!) celebrates 125 years of existence this year. It was the first of what was to become five regional chess unions in England, which later gave birth to today’s English Chess Federation. 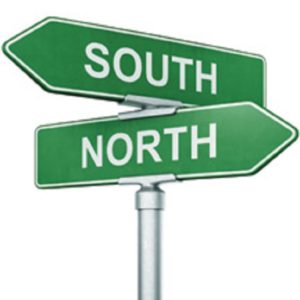 To mark the historic milestone they’re hosting a huge chess shindig up at Swiss Cottage next month.

It’s going to involve upwards of 400 players taking part in a massive North v South game – a nod to the distribution of the historic counties of England around the river Thames. You can read more about the fascinating history here, but the essentials you need to know are as follows:

Hammersmith members have already started registering their interest – all you need do is choose a side, and drop an email to the relevant team captain. Rivalry aside, it’s rare to see so many competitive games in a single place – should be a belter!

Rumour has it the nearby Swiss Cottage Tavern will be rather busy afterwards too… Good luck!

Brace yourselves for a frantic evening of chess! This coming Monday 14th August we’ll be hosting a pre-season Graded Rapid-play night.

Following hot on the heels of last season’s hugely successful Rapid-play evening, this is another opportunity for everyone in the club to obtain a quick-play grade.

Anybody who is ECF registered for the 17/18 season is eligible to play, we’ll just need to know your ECF number – this includes any non-members who want to come along.

And, in a sneak preview of our plans for next season – we’re finessing details for our season-long Club Rapid-play tournament. We’ll be offering graded Rapid-play games on a monthly basis for anyone who wants to enter… watch this space!

01.08.2017 – Yes, the Hammer posse took to the mean streets of Kensington to bring chess to the good citizens of the Royal Borough.

The vehicle to deliver our brilliant game was a pub crawl. Not a curious choice considering the partiality of many Hammerites to the odd tipple! 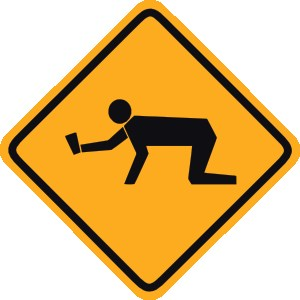 The idea, originally, was to play a 10-minute blitz tourney playing two rounds in each pub – a noble idea. The pubs in question, and the order in which we would proceed were the Elephant and Castle, The Goat, The Builders Arms and the Devonshire Arms. However, I have to report a deviation from the plan when the posse missed out on the Builder’s Arms, choosing The Greyhound instead.

Unfortunately, due to various factors the concept was quickly abandoned and the job of casual chess accompanied by lots of beer, took over. Coupled with a somewhat leisurely approach to time-keeping, the evening proved a more social than competitive event.

Plus, the natural camaraderie aspect and good conversation added to the evening. In other words, the usual rubbish that chess players usually engage in! 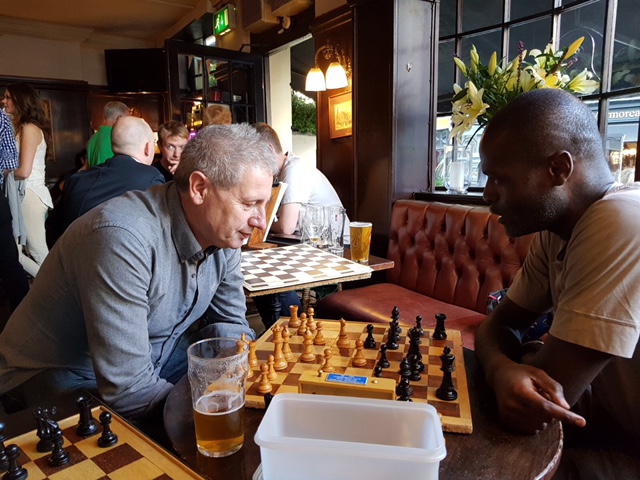 So, this report has little to do with chess, but more to do with the quality of beer consumed.

As you know, I have a penchant for bestowing nicknames on the participants of any Hammer event, and there will be no exception here. The Magnificent Seven were:

Plus a late night interloper, Jeremy aka “Brexit” – I must point out that did not turn us into the Hateful Eight!! My first and only Quentin Tarantino reference of this report!

We also picked up a friend of Dr D, and a couple of members of the public who were duly dispatched by the veterans in summarily manner. 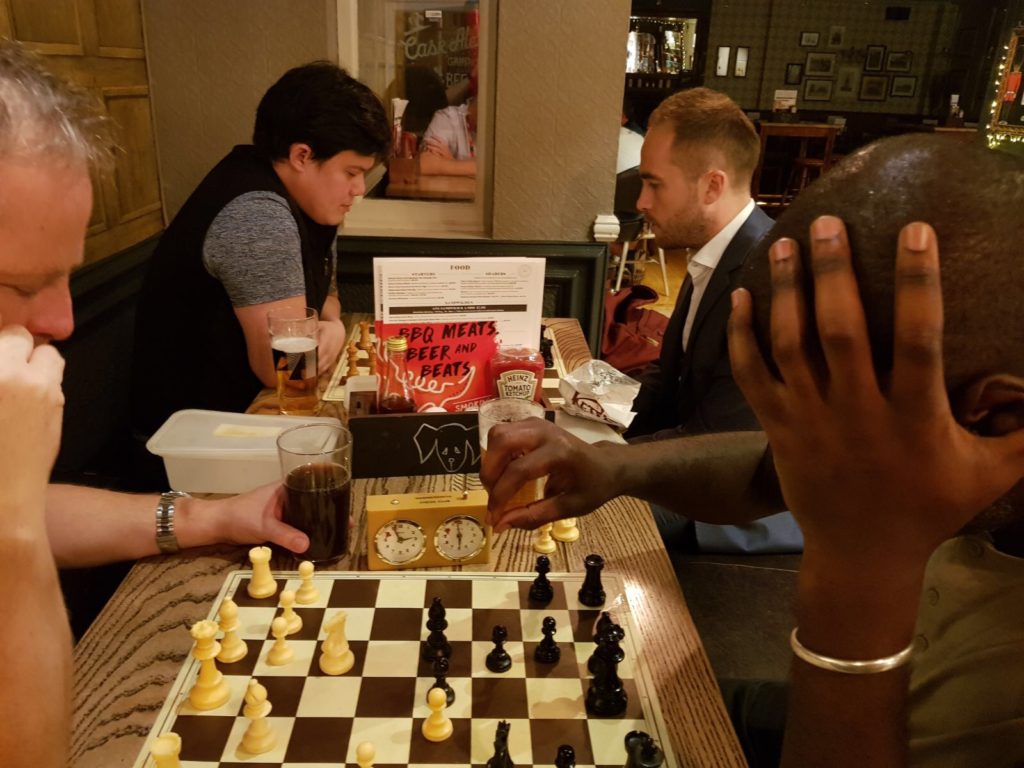 I think the Great Dane was troubled, in chess terms, only by The Suit and maybe Jay Z.

Kool, Pickle and Dr D had a solid evening of beer consumption and a mixed evening at the board.

As for Clueless, he successfully pickled Pickle but crashed and burned against the Great D. Finally, he had a 50/50 result with Jay Z where the chess played was of the most dubious nature. I think beer at this stage was definitely affecting his play – and definitely not for the better. At the end, he won his first game against Brexit, and then lost the next three. 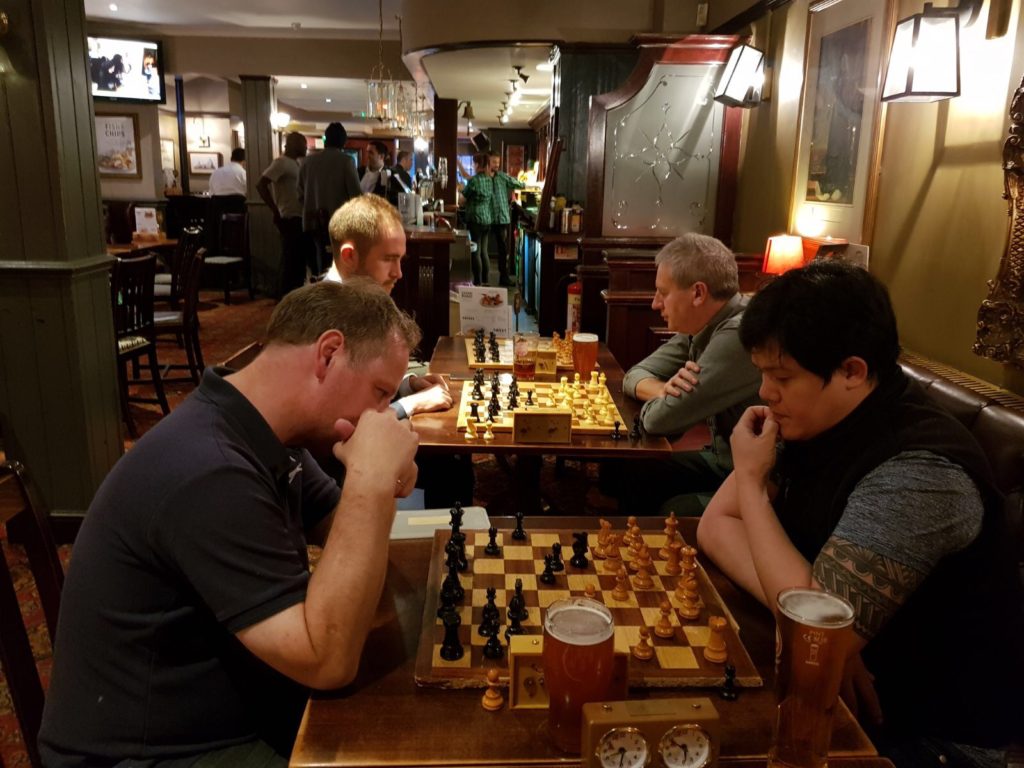 To be honest the night took on something of a posh version of Ulysses by James Joyce as, like the great literary work, we progressed regally from pub to pub. Indeed, we looked like a CAMRA investigation team rather than a highly-regarded and prestigious West London chess club!

The winner of the evening overall was the social craic, with the beer a close second and in a distant last place the quality of the chess.

In terms of competition I can only report the result of the best pub.

The winner was clear-cut – The Devonshire Arms. In the words of the Great Dane, they have “Summer Lightning” – enough said.

In clear second place, the Elephant & Castle (not the South London version), followed by The Greyhound and finally, The Goat.

It was an odyssey of an evening and maybe wisdom/nirvana in the form of The Devonshire Arms was found in the end.

So, a great night and thanks to the Magnificent Seven plus One – totally worthwhile.

Normal chess life resumes at The Albion on Monday, with the next of our Training & Theory evenings – see you there!