As well as our first team in the Open section of the online London League, Hammer has entered two teams into the U1825 average-grade-limited division.

Round 1 pitted our two teams, Hammer Hodgson and Hammer Hedger, against each other; the Hodgsons prevailing, 3-1. Twitter legend Andrew Cuff takes us through his top board clash with Jon Smith, an instructive example of how to create and exploit a space advantage.

All three Hammer teams are back in action this evening. Follow all the action on Twitch or join the Zoom room for internal discussion and analysis.

Yes, Lord Clueless, chief chess correspondent for “The Woodpusher’s Gazette” is back!

Over the next few months I will be chronicling the weekly adventures of Hammer Firsts in the inaugural Online London League competition. We are playing in the Open Division.

Lord Clueless will be slipping in quotes from a particular movie in each of his reports – your job is to guess the movie. The relevant words are highlighted to help you – answers please in the comments. The first correct answer earns a pint from Lord Clueless!

I know I have used this style before – but the mantra in Clueless lazy journalism is “if it ain’t broke, don’t fix it” – so without further ado…

My fellow Hammers, it is with a great sense of duty and awesome responsibility that I take on the role of Captain of Hammersmith Firsts. I have been absent from the captaincy role for far too long and, like a good drug (I am a pharmacist!), you just have to try it out again.

Our first opponents were the dreaded Hendon. A team that has been absent from the LL OTB competition for several years – preferring to graze in the pasture of the Middlesex League. A little history here – I think it’s fair to say Hammersmith have had serious beef with Hendon in the past – mainly based on the culture and philosophy of both clubs – they are so different. Plus, this additional issue – Hendon’s home venue is so remote from any decent pub it constitutes a real slap in the face for all Hammers. Indeed, this fact and this fact alone condemns them. 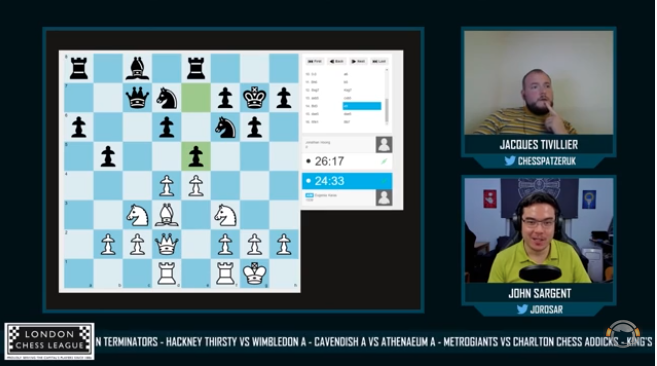 However, in a world ravaged by Covid it is time to move on – there is no point in holding grudges. Sometimes you gotta spurn the beef.

The line-up for Hammer was a mixture of youth, good looks, experience and a definite hint of German (thank God). Yes, Hammer is a true international club. Here is the face-off table:

A solid 2-2 draw with a real chance missed for the win – but more of that later.

Before I get down to the nitty-gritty there is something surreal as a non-playing captain in online chess watching “your boys” do battle in cyber world. You watch the games as a detached observer but with real emotion involved. The best analogy I can think of is Jose Mourinho being sent to the stands to watch his team play and not being able to get involved. It is horrible – but in a Covid world we must all make sacrifices. How noble Lord Clueless is.

Board One saw Mark, playing White, take on a wily opponent – Bob Wilmoth. The game was a Dutch with Bob advancing to e4 – Mark retreating his knight to g1 with the idea of re-routing to h3 and f4. The first 15 moves were played rapidly as both players were definitely in their opening knowledge sphere. The first big think came when Mark played Qb3 – this is where things got complicated. From here it was tense and very double-edged. It was decided by a blunder in a tough situation – but hats off to Bob, Nf3 was devastating and immediately provoked resignation from Mark. I was gutted for him – he has played superb chess over the last 12 months, beating a GM amongst others and this was a definite aberration. However, I do not believe any version of the Dutch system, sorry Ginger GM, is totally secure.

Board Two saw Lord Hurricane, the Skult, who is a one-man Cult, playing black in a Sicilian that involves an early massive pawn/piece swap early on. By move 16 there was a definite lack of bits on the board with a R + B for white versus a black R + N – with a number of pawns. It was definitely a book line – in the end I felt Chris had a small advantage but definitely nothing big enough to secure a win – one slight inaccuracy could lead to disaster – a draw was the result. I guess it was a case of the only way to lose is to play a move.

Hammer back in the game and on the scoreboard but still trailing 0.5-1.5.

Cometh the hour, cometh the man – yes Hammer hero and all-round star of our club – Christof, aka “Der Vater”, was up next.

The game was most pleasing – a London System – the favourite of our most excellent Club Secretary, Pickle. Christof played a blinder – with a nice tactic leaving his b5 bishop en-prise and playing the sublime Ne5. This was a masterclass of Nimzowitchian proportions – time for some Covid-era hyperbole – there is just not enough around.

Christof’s opponent subsequently went into meltdown sacking the exchange in the hope of forcing a drawn position but forgetting a rook fork. Christof just went into Defcon 1 mode and obliterated him.

All eyes turned to Jonathan, the last game to finish and saddled with the added burden of the outcome of the match. It could be said that the primary goal was to win the game. I think JH played solidly, although he did incur some verbal banter online from MC John “The Sarge” Sargent and his sidekick Jacques Tivillier, the Celtic Tiger and top bloke. Check this out:

In the end due to a clock running down but with a winning position achieved JH took the draw – probably if he had five more minutes on the clock, he would have plotted his way to victory.

A draw was agreed and the match ended 2-2, a solid start for Hammer Firsts.

Next match is next Wednesday 28th – Lord Clueless is content. Next time I’ll make sure I get the PGNs.

Finally, I appeal to all Hammers to get involved in this competition – it is something different – it’s against local rivals, and to be honest it is all we have got at the moment outside our Hammer Chess bubble! Hammer needs you all.

So before I signoff, can you identify the film? Answers in the comments please, and no Googling – that is cheating! – where have I heard that said before in relation to chess??

One of the ongoing features of Hammersmith Chess Club in the time of Corona is the Junior Hour. Online, that is!

With the start of the new season, the online Junior Hour is open to Club Members including those who are so-called ‘late starters‘, or to put another way ‘adult improvers‘. Each Tuesday, the participants meet for one and a half hours in a dedicated Zoom room. A senior club members leads the group through the topic of the day, and we always start with a few warmup puzzles.

Last week, the topic was the London System. We went through the main features, focusing on 12 games which Magnus Carlsen played this year using the opening. We delved deeper into two of his games which demonstrated good examples of how to build a Kingside attack. Here is the first:

Believe it or not, an hour after leading the Junior Hour, Christof played for our sister club The Celtic Tigers in the online Four Nations Chess League, and was able to play the London System exactly in the spirit of what we had learned that same evening, taking a leaf out of Magnus Carlsen’s book! Here is the proof with Christof’s game – a short game with a nice mating attack:

Once per month, the lectures cover one of the many British chess legends. The last one was on Mir Sultan Khan, as a few weeks before another one was our own Club Member GM Keith Arkell. We analyse selected games and ask ourselves whether we would have found the Master moves, or – what we realise surprisingly often – whether we might even have improved on our role models.

We also did it with games of (name-dropping here!) the young Magnus Carlsen, Nigel Short and others. A few of these lectures are summarised in some short clips on the Club’s YouTube channel:

Some of the participants then meet on Sunday evenings on lichess to compete with other members in the Weekly Hammer Blitz tournament, and I can assure you I see a gradual progress of our Juniors and Late Starters in playing strength.

We all wish the old times back, playing and meeting in our venue. The Club Committee is regularly reviewing the situation and when we might get back over the board in person, but sadly it does not yet look like there will be a return to F2F competition anytime soon.

So, whether we like it or not, if we want to play chess, we have to embrace the online version! The good news is, there is a lot on offer in a familiar Club environment: