Hammersmith’s Junior Hour tutor, YouTube star, and 2020 Club Personality of the Year, Christof, shares some selected highlights from his diaries over the last four months.

On 25th of February, Corona shows up for the first time in my diary notes. There are worrying reports about increasing numbers of infections and deaths from the virus in Korea, to where my wife has planned a trip in three weeks time. We agree to postpone the trip until the end of Summer, observe how Korea deals with the situation and wonder whether similar measures would be possible to adopt here in the UK.

Chess becomes increasingly affected by Corona. In early March, I participate in a weekend Congress in Exeter. Last year, I had been a returnee to chess and surprisingly won the Major Section there. This year, I play in the Open section (finishing joint 6th), but that is not the only difference – people are allowed to not shake hands before or after the game. Allowed to abstain, not required to do so, well that sounds harmless. But does the virus travel via the palms, or in the air? Even today, I still remember the hot breath of my opponents, two feet away, for 20 hours over 3 days…

During the Congress I receive an email from FIDE informing me that the Amateur World Championship for which I was nominated to play in April on Crete, is postponed for half a year. Well, that now starts to affect my daily life.

I had endured a rigorous training program for the past three months and there were just three more weeks to go until the big event and before resuming a normal life again. How will I be able to keep up that energy level for another six months? Well, being in principle a positive-thinking person, I convince myself that I should be lucky to be healthy, with numbers of virus infections and deaths quickly starting to increase in the UK. But read on.

Club life changes in early March. It soon becomes clear that over-the-board chess will disappear for some time, and that club members are looking for alternatives. In a club which never sleeps, there are so many people with lots of ideas, enthusiasm, and some with time (including me, not having to prepare for my Crete tournament anymore), and a lot of new activities are organised. It seems chess has never been more diverse and vibrant.

Lockdown starts, but for me as a pensioner there are not many changes in the daily routine. Okay, no pubs, fine dining and cultural events anymore. No day trips to the country, all international travel cancelled, but otherwise even more chess than before – not too bad!

News about Brexit is replaced by news about Corona. Worrying news. Death rates spiralling out of control, the government obviously indecisive. I cherish the health and social care workers. And then comes my own personal encounter with the health crisis.

One morning I wake up with never before experienced excruciating pain (though my wife reassuringly tells me it will be nothing compared to labor pains) and I have to call the emergency services.

Dry cough or similar symptoms? No. Fever? No. Periods of unconsciousness? Not yet. Well, then they cannot send an ambulance, sorry – the NHS has to be protected.

After some time the GP answers my calls, delivers a remote diagnosis and prescribes me some medicine. For two weeks I live on drugs before I am back to normal.

Some afterthoughts remain and I cannot forget the pictures of the PM boastingly shaking hands in Corona-infected hospitals when I diligently restricted myself to elbow-checks with my chess opponents, and we both fell sick during the same days a month later. And I will not forget whose responsibility it was and is for the underfunding of the NHS.

Social life goes on during the next weeks in lockdown, but no, not as some privileged politicians do. Gatherings now take place via Zoom, be it in normal chats or in highly sophisticated cocktail hour groups. Discussions circle around health issues (mostly my older friends) and economic worries (the younger ones). Political discussions with family and friends abroad compare the different national approaches to the crisis. I tell them, being a chess player I believe in post-mortem, an exercise where you learn from mistakes by going through the finished game together with your opponent. While the term may currently be inadequate, I express my hope that one day such an exercise will be done on Corona, because I dream of a life after lockdown and definitely do not want to have to repeat this experience.

And now, 15 weeks after my first Corona diary entry, my 3-month Carlsen-style beard shaved off, close to start of Summer, it feels more like Spring is beginning, everything re-awakening. Discussions are intensifying about resuming regular chess activities, not only in other countries which have already overcome the crisis, but even in the UK. I feel anxious.

Hammers – as many of you will already be aware, we sadly lost one of our own recently when long-standing player and stalwart John Woolley passed away. He will be greatly missed in the world of London Chess, having been an active player on the circuit at various clubs for many years.

Fellow Hammer and long-time friend of John’s, Carsten, offers us a fitting tribute.

I no longer remember when I first met John, but it must have been late Summer or Autumn 1995 when I joined Hammersmith after a few years away from chess. We became regulars in the same teams for the next 20+ years, most of them with John as captain of the Thames Valley team.

As is thankfully still the case, we usually socialised after matches in a local hostelry, and we were also both in groups where a few of us would occasionally meet up outside the club to play some blitz and put the world to rights, so over time I think I came to know John quite well.

He was instantly recognisable – a thin man always in a jacket, a size too large, shirt whatever the weather, and an overall slightly dishevelled appearance giving a somewhat eccentric impression.

However, behind the exterior was a keen mind with a wide range of interests, and our conversations ranged well beyond chess, usually including discussions about whatever book I was reading, exhibitions John had been to (there were many!), films he’d seen (he had a love of arthouse cinema), politics (left!), football (Arsenal!) or any other topical issue of the day. We didn’t always agree – in fact often we did not – but it was always stimulating and frequently gave me a different perspective, which I appreciated. I hope I did the same for him.

Saying all of the above, we of course primarily met through chess, where John’s contribution to Hammersmith Chess Club was substantial.

As mentioned, he was Thames Valley captain, a league he felt a strong affiliation with – for many years a committee member, and a regular for other teams as well as being a very frequent club night participant. One of the reliable regulars every chess club needs.

Checking the ECF grading list I see that John’s grade when we first met was consistently in the mid-150’s, roughly equivalent to 165-170 today. Somehow I remember him as stronger than that.

In a sense, he was. John had a classical positional style and quite a strong aesthetic view on how chess should be played correctly.

This gave him a somewhat impractical attitude to competitive chess, and as a result he got swindled more often than he should have been, especially in time trouble. This, combined with a propensity for premature resignations – especially if he felt he’d messed up a good game – and draw offers, meant that his practical results were always below what they should have been purely based on his chess ability.

These traits got more pronounced in his latter years, and his results declined in line with that, but for those who only know him from this period, he was more than you saw.

I must also mention John’s absolute honesty and insistence on always doing what he felt was the right thing to do, and his expectation that others would reciprocate. This sadly on occasion was to his detriment.

At an away match at Harrow, John’s opponent was playing on in a stone-cold theoretically drawn ending, clearly trying to flag John who was down to his last couple of minutes while his opponent had plenty of time. John was murmuring under his breath, clearly unhappy, and the Harrow captain, Nev Chan, was standing next to the table also not looking happy.

Eventually John’s flag fell, and Nev immediately asked “John, why didn’t you offer a draw? I would have immediately accepted it as a section 10.2 claim, as our player clearly wasn’t trying to win by normal means”. John’s response was along the lines that it didn’t occur to him, he was too upset by his opponents unsporting behaviour.

John didn’t say so, but I think another factor may have been that his opponent was an irrelevant pawn up, but classic good manners in that situation dictates that the player with extra material should offer the draw. This is undoubtedly what John himself would have done.

Of course, to him, chess was more than a competitive game – it was a lifelong passion with an appreciation of the aesthetics and history of chess.

As I sadly don’t have one of John’s own games to show, I will invite you to play through a game he several times mentioned as one of his absolute favourites, played by his great idol Tigran Petrosian, to get a feel for his chess ideals.

Chess has lost a great friend, rest in peace, and thanks for the memories.

John’s funeral will take place at Mortlake Crematorium on Monday 15th June, starting at 10am. Please refer to the Mortlake website for visitor information:

Being a member of Hammersmith Chess Club is not only about playing chess – there is much more to it. We have many groups of interest ranging from culinary ideas, lifestyles, philosophical discussions and much more. One of those groups is for keen runners.

Hammer’s runners share a WhatsApp group and a Strava team, and they try to keep fit together, particularly during lockdown times!

On Saturday June 6th, a small squad of Hammers – Adam, Chris, Raluca, Benji and Nadim – ran a virtual relay Marathon. Every runner covered 10.5km, so that the total distance summed up to more than the official Marathon distance (42.195km). 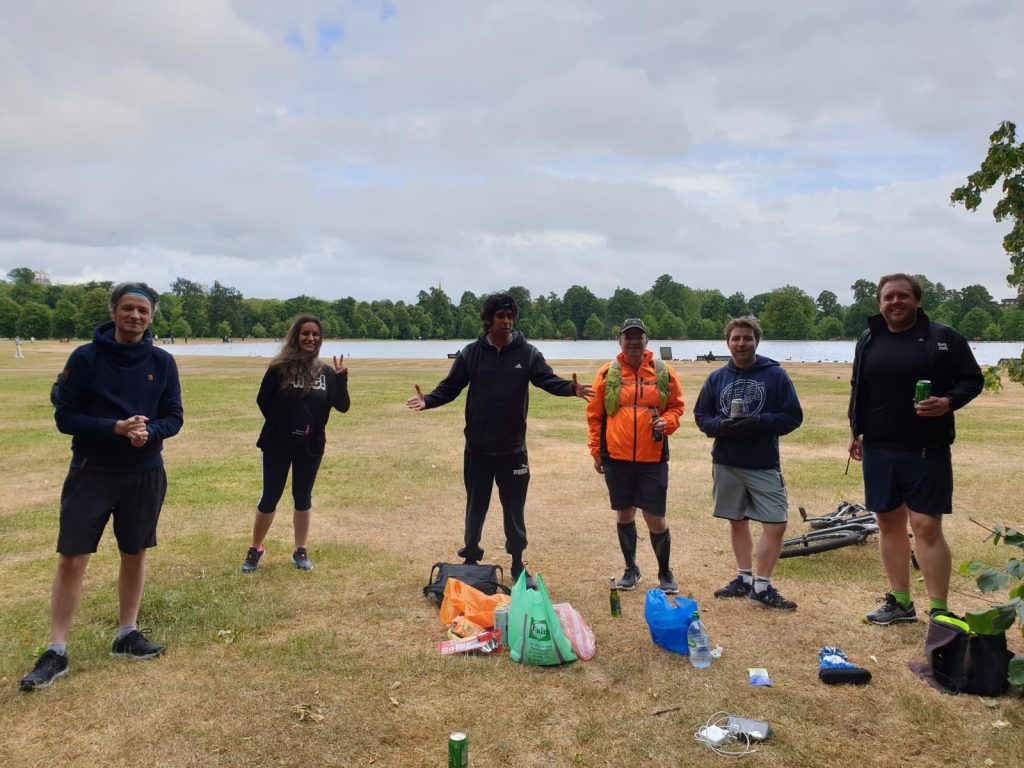 The beauty of that event is that it came as a good way to break the Covid-19 social isolation – whilst adhering to the required social distancing – and it was one of the first physical club member meetings organised since the lockdown started back in March.

All the runs were synchronised to converge at the same point in Kensington Gardens at 5pm. It was with great joy that the runners finished their runs together and met in real life in the park! Everyone felt that life is getting back to normal again, despite the lack of handshakes or hi-fives. 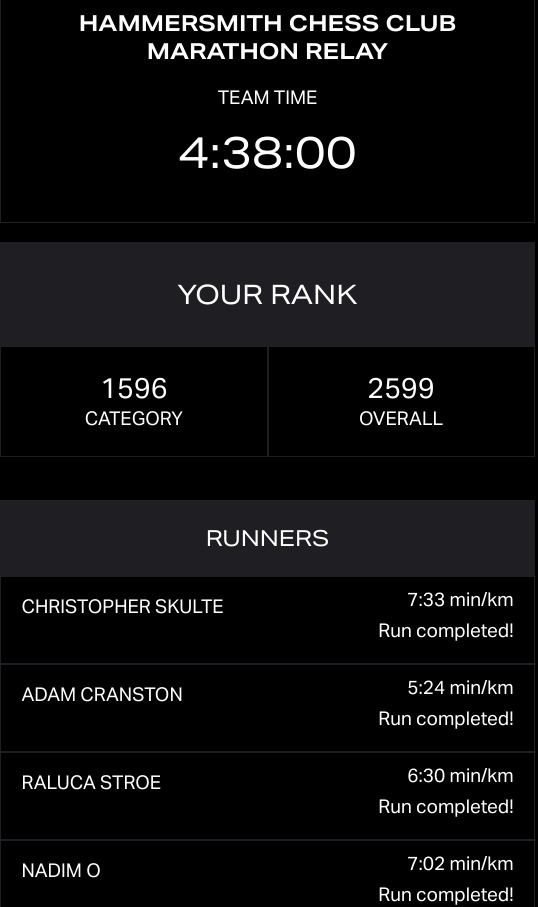 Kishan, who did not run on the day, joined the gathering with a generous serving of support and delicious snacks and drinks.

Everyone enjoyed the event and hoped for many more, if it was not for the British weather that cut the after-run gathering a bit shorter. Everyone is now eager for the next event, hoping it takes place on a more sunny day! 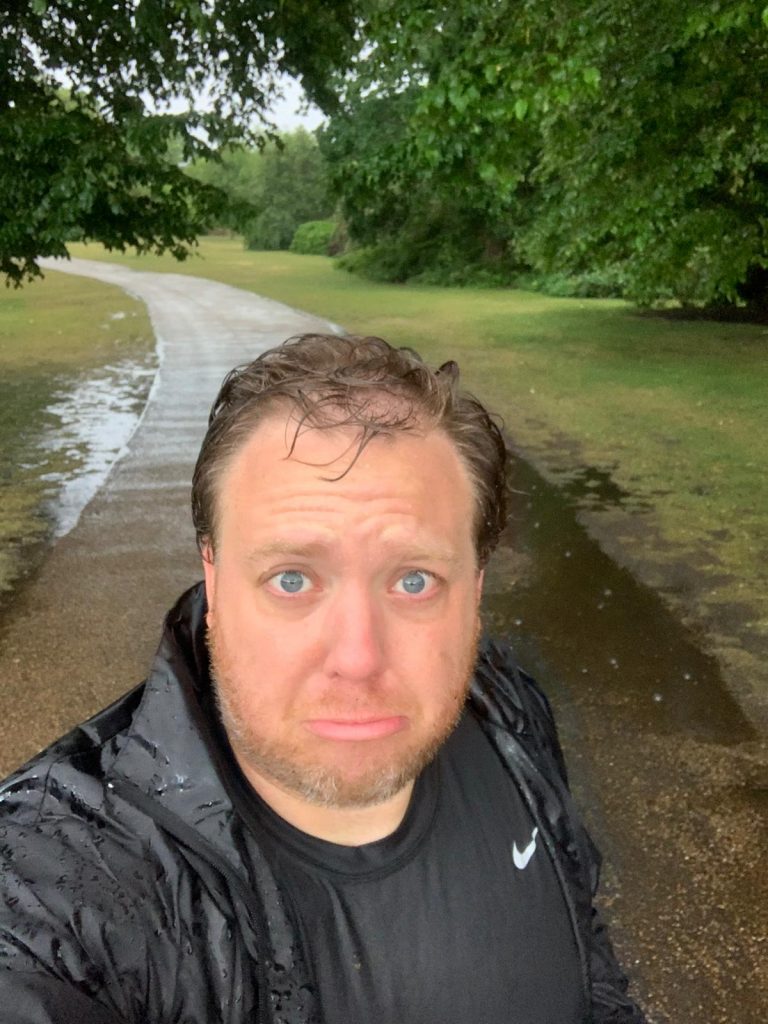