Hammers – with all regular league fixtures now complete, and the Summer Chess League well under way, attention once again turns to our Summer activities.

We’re delighted to announce some additional events at the Albion this year, with no fewer than THREE training lectures being added to the programme.

First up on 1st July will be Jim ‘El Loco’ Stevenson, with a repeat of last years highly successful format of a guided talk through a famous game, complete with plenty of audience participation and interaction. This year the emphasis will be on thinking & reasoning skills to navigate through any position.

Swiftly followed by Chris ‘Sydney‘ Skulte, on July 29th with a session likely to focus on the sexy topics of endgames, and using initiative to pressure your opponent.

Last and by no means least, will be our Great Dane, Carsten Pedersen, on 12th August, majoring on another lecture about the history of our beautiful game, with added game analysis. 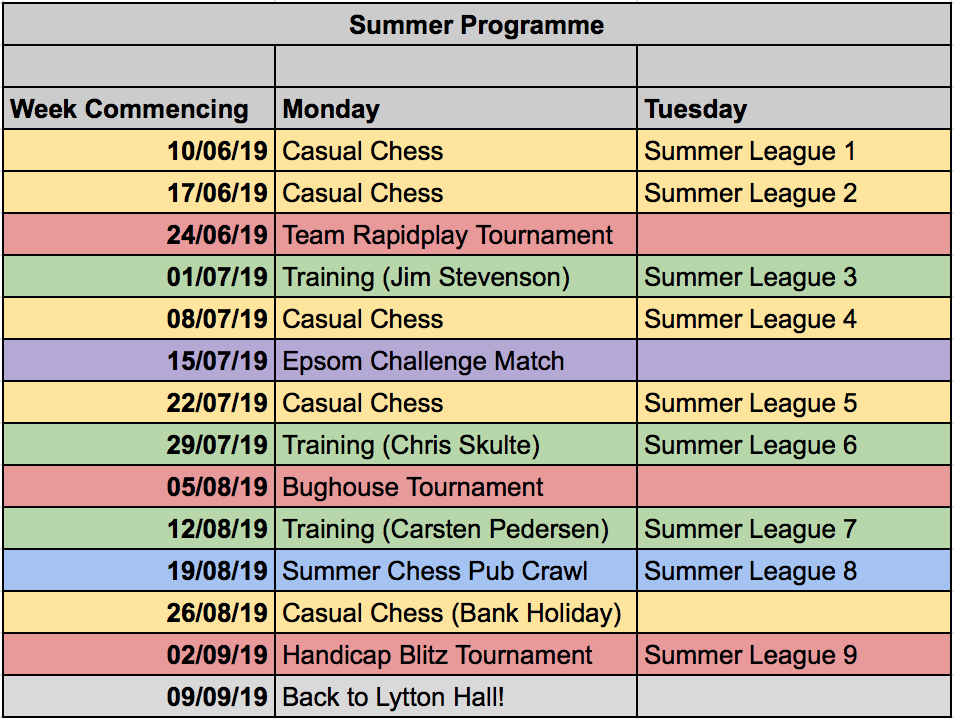 As one of a handful of progressive and forward-looking clubs in London, us Hammers are always on the lookout for other clubs doing things the right way too.

In the case of Epsom chess club, we spotted that a handful of chess enthusiasts have recently resurrected this once great club, and have made great strides in bringing the beautiful game to the charming folks of South London.

Their website is worth a read – after a 50 year hiatus, the club was re-founded in 2018 and is set to go from strength to strength, continuing the proud name of a club originally founded in 1913! . What better way to support their efforts than face off in a double-header and show them who’s boss?!?

This will be a unique opportunity to make new friends and play some chess in a pub (in Epsom) and a brewery (Sambrooks). A bit like El Chessico, only Epsom might actually give us a decent game.

The away leg is on Monday 15th July at the Rising Sun Pub, in Epsom (http://risingsunepsom.co.uk/) – and note that there is no SL fixture the following day.

The return leg will be on Friday 9th August in the brewing room at Sambrooks brewery, Battersea.

If you’d like to take part in a great bit of chess, beer and friendship, and lend a hand to another club doing things the right way, please contact John by July 5th: john.white49@ntlworld.com

We are pleased to announce the start of our brand new, Hammersmith Chess Club, season-long, internal long-play competition…. the Sledgehammer Tournament! 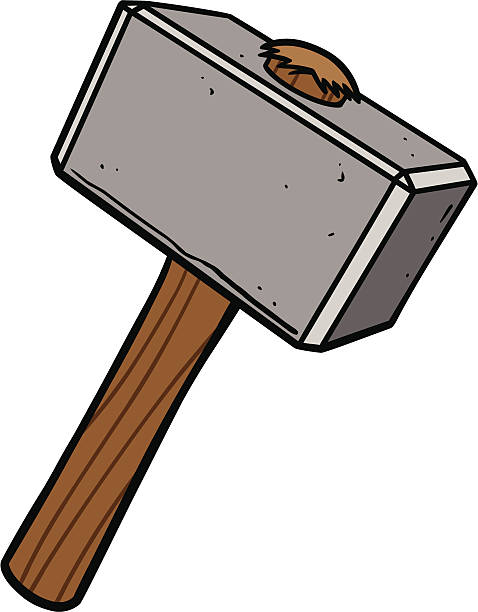 This is a quick-start guide for you to understand how it works, how to register, and start playing!

The full details and rules of the tournament can be found here: Tournament Description

We’re eager to kick-off this new tournament ASAP, with the aim to provide plenty of standard chess playing graded game opportunities within the club, and increase interaction amongst our members!

Note that by registering for this tournament you agree for us to share your contact information with the other participants.

Summer is finally here! At Hammer this means two things – The Summer Chess League and the Hammersmith Summer Programme.

The Summer Chess League is a joint venture between us and Battersea Chess Club. It’s now into its third year, and promises to be bigger and better than ever before!

It will consist of nine match weeks (two on, one off) on Tuesdays played at Battersea Labour Club (5 minutes from Clapham Junction), starting on June 11th. The event is always really fun, with loads of players, team logos, cheap beer and a fantastic venue!

This year a whopping 30 teams are taking part! Hammersmith will be entering five of them, and all members have been put into squads and should have been contacted by captains. If you haven’t yet heard anything, please let us know.

If the SCL isn’t enough chess for you, we’ll be upstairs at The Albion every Monday night. Most evenings will be dedicated to casual chess, but there’ll be a few fun tournaments to take part in.

And of course we haven’t forgotten the highlight of the Hammer Summer Programme – this year’s Kensington pub crawl will incorporate even more pubs, with plenty of chess along the way. Save the date – 15th July!

Full details of all events below: 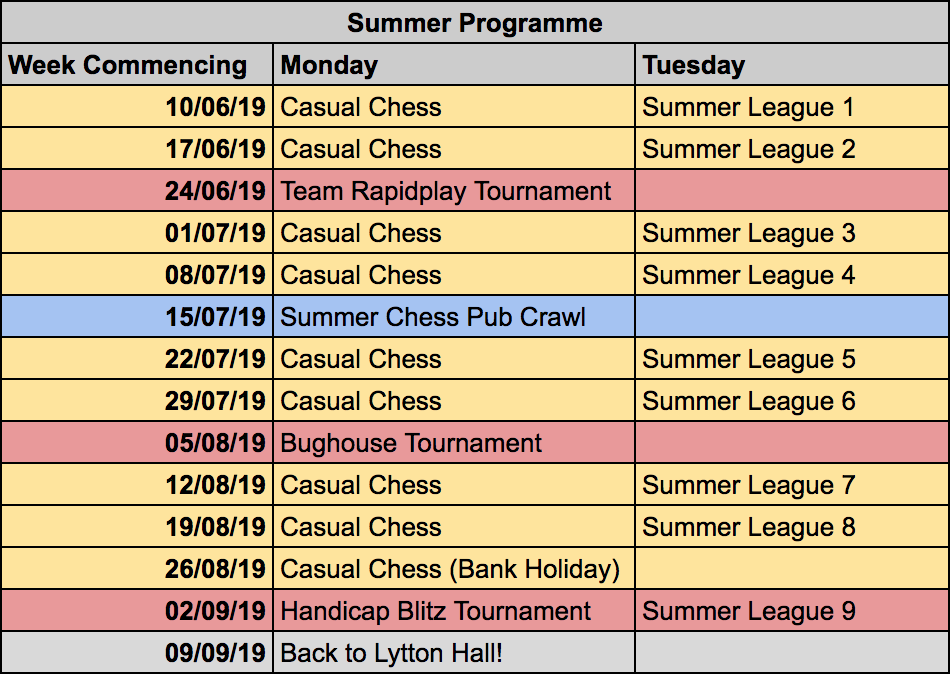 Had Hammer found the secret code? And if so, would it help or hinder them? Or had Met’s omertà code held firm? Were many individuals really as ignorant as they professed? Most importantly, does the reader care?

To add further intrigue, the Dulwich captain emailed late on Wednesday afternoon that they would, regrettably, have to default two boards. Had the opposition been nobbled? The PM was consulted on this once in a generation issue, but Mrs. May found herself unable to offer a coherent argument either way.

So to arms: With all eight Hammers finally assembled, time to get down to business. Rauno, farcically on board 8 (he’s a 2200 player) demolished his opponent within the hour. His grateful captain, perhaps unable to withstand the tension of spectating, quickly ushered Rauno, a diehard Gooner, over to a local hostelry to watch the Europa final.

Word came through that wins for Chris, then for Bajrush, two of our greatest heroes this season, had brought the score to 5-0. How many points did we need without being accused of chavish overkill?

Your Chelsea supporting scribe decided it would be more stressful watching the second half than the chess, and sloped back to Citadines. Alas, to be met by a despairing Marios who had just lost a well played game to a one move cheapo. Your captain tried to recall the charm and tact of our previous capo, Captain Clueless, in offering words of consolation. 5-1

Not to worry, soon Carsten appeared, anxious for some beer after a slashing victory. 6-1

What could go wrong with our top 3 men still in action? How many points did we need again? Curse that hapless El Loco and his love of John Le Carre novels.

To be frank, Dulwich’s top boards are strong and were fighting for blood and honour. Soon Ryszard, our leader, staggered out bowed and bloodied, claiming that up to a point he was playing like Alpha Zero. But alas, at the critical moment, the power short circuited. 6-2

The T-Bone Thomas, our relentless iron man all season, fell into a hopeless position on board 2, his opponent attacking like Mischa Tal reborn. 6-3 imminent.

On 3, Tony had been nursing a sizeable advantage through the middle game, but his opponent refused to give an inch. Suddenly, in a moment of, who knows, was it divine inspiration, or a calm assessment of the multifarious tie break possibilities, he offered a draw. Now Tony is not a man who likes to draw. At once his opponent shook hands and Thomas, on seeing this, resigned.

The match was over 6.5-3.5. Why did captain El Loco suddenly look like the proverbial Scotsman who had lost a pound and found a fiver? Were Metropolitan, Wanstead and the LL Committee still not available for comment? So many questions – and not all of them rhetorical. 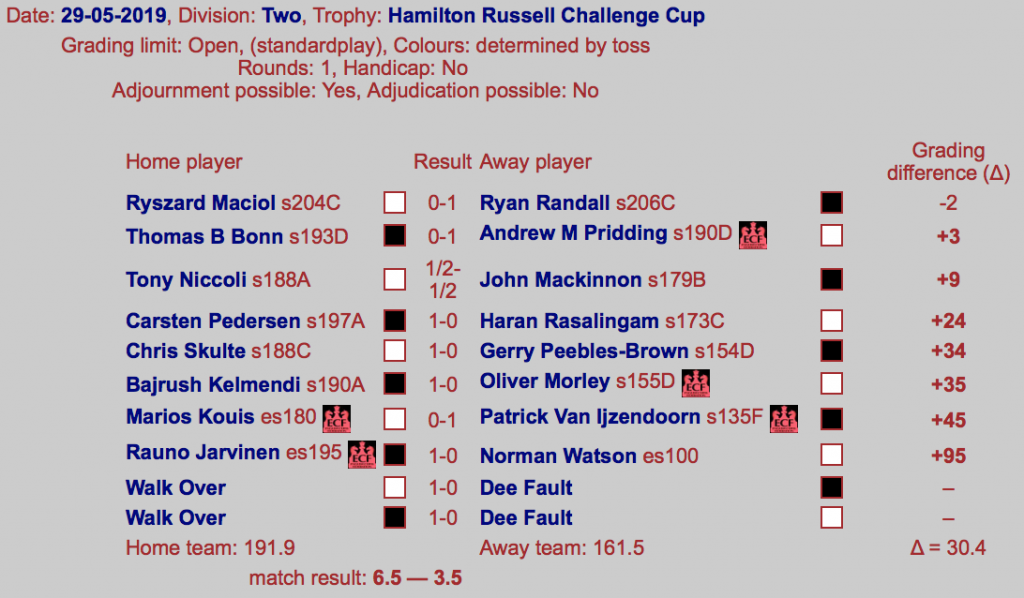 To the pub. Much mirth and jovial banter. Then the result, as if by magic, appeared on the LL website: Metropolitan 5.5-3.5 Wanstead & Woodford (+1 adjourned).

More beer. And mutual congratulations with Lewisham captain Andy, whose team were also promoted as D4 champions that evening. Three cheers for the inventor of board count, even though he cost us the Thames Valley Cup Final last year!

Allegedly a group of Hammer players were last seen heading off into the night, set to relieve their captain of his last shekels at the poker table. I couldn’t possibly comment. Chess players don’t do that sort of thing do they?

I must heartily congratulate, and of course thank, the 24 players who took part in the campaign. Spartan Hammers one and all, I salute you.

Of course every point is equally valuable, but a special shout out to those absolute diehards: Bajrush, Thomas, Carsten, Sylvain, Paul, Marios and last but not least, our MVP, Mr. Board 1 hat-trick man himself, Chris.

Hearty thanks also to the wider Hammersmith membership and committee for your encouragement, support and advice throughout. And a big shout out to former Captain John, who started this process back in Division 4, and was on hand as “super-sub” on Wednesday. A triumph for team camaraderie and fighting spirit.

First Division, prepare yourself for the Hammer.