There is a tradition in British advertising that up to the 25th December the consumer is bombarded with a stream of potential gifts for Christmas. Come Boxing Day the theme changes and suddenly sale information and next year’s summer holiday adverts take over. For the next two weeks you cannot avoid the inevitable deluge of destinations and flights you must and should have.

In Hammer we like to be ahead of the game – so am bringing you the exciting news of the Hammer European weekend in 2020.

The destination – the beautiful and stunning North German city of Lubeck.

Lubeck is a stunning Hanseatic city and a major port in North Germany. With superb brick architecture and where human colonisation happened over 10,000 years ago. Wikipedia has its uses.

More importantly it has an extensive and thriving chess club with an excellent junior section.

Some Hammers may remember we hosted several of their young chess players earlier this year and really enjoyed their company and that of their team leader Nicole.

The weekend will follow the format of previous Hammer raids with us arriving on the Friday, playing chess on Saturday and Sunday morning before returning Sunday evening.

In view of their extensive junior section I am more than willing to entertain the idea of us taking a junior team as well as an adult team to challenge them.

Probably about thirty Hammers overall have enjoyed our trips to Amsterdam, Cork and Wrocław over the past three years – these are superb weekends, full of fun, camaraderie, chess, the occasional beer and making new friends

So when those holiday adverts kick in on Boxing Day – think Lubeck!!!

The best route is a flight to Hamburg and then high-speed rail to Lubeck.

The challenge has been made – the honour of Hammer is at stake.

I’m sure everyone remembers Christof’s debut article for Hammer – an account from the East Devon Congress – his first over the board chess tournament for nearly half a century!

Since then Christof has established himself as a Hammer legend – junior coach, Sledgehammer leader, and general top guy.

At the end of October he entered his second tournament – this time overseas at the 23rd Open International Bavarian Championship. Read on for Christof’s account of the topsy-turvy week. 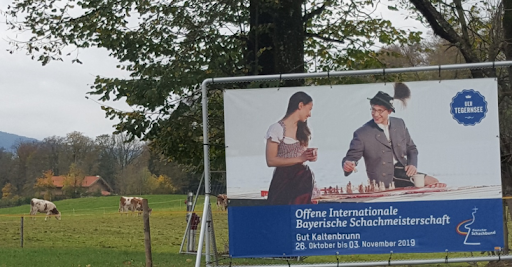 I would like to whet the appetite to participate in these kind of international week-long open tournaments. And especially for this specific great festival in which the UK was underrepresented to put it mildly. While the 505 participants came from 29 nations, with 68 players from non-German Europe, 13 players from India, 11 from Russia, none came from Scotland, Wales, NI and only one from England (not me, but a junior against whom I had played this year, what a coincidence). Why this absence??? Was it Brexit day 31 October in the middle of the tourney? Well, everyone should have known that Halloween was not to be the last Brexit date. The rugby world cup?? Can this really be, rugby more important than chess??? But then, what do I understand about rugby, or about the English… So, only one UK chess club showing up in the players list, Hammersmith!

The great location needs mentioning. This one stands for an ideal holiday week at a mountain lake in Southern Germany, combined with highly competitive chess – the games start at 4pm, so there is ample time in the mornings to go to the mountains or around the lake, and my great city Munich is just one hour away. 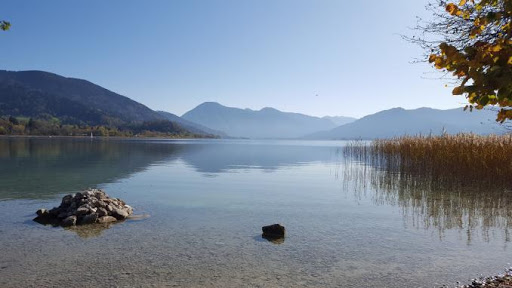 In the first round, I had to overcome formidable determined opposition (as shown in the photo) which compensated for the ELO difference. Other greats lost their first points against juniors. Top-seeded GM Gata Kamsky drew against a 12-year old Indian more than 500 points below his 2685.

The second round saw me clawing to a draw by repetition against an opponent some 200 points higher. 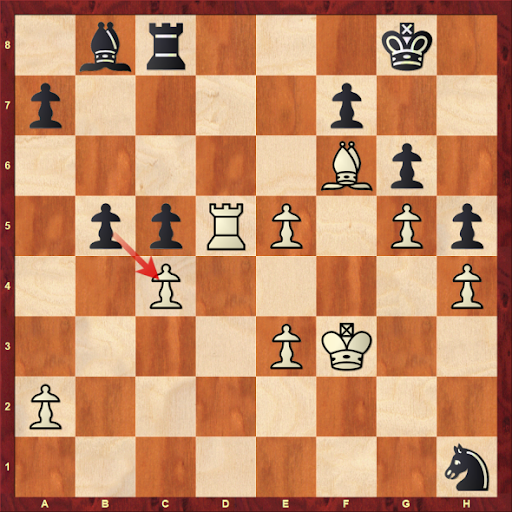 I noted as well that the “English opening” guru GM Mihail Marin lost his game. Maybe he had been distracted after our unrelated discussion just before the round about the exhibited paintings of his wife and FM Mariya Yugina? Sorry mate.

In the third round I achieved a lucky draw after difficult defence. The computer later told me that I had not only followed my opening preparation unknowingly for the first 14 moves but then had 100% accuracy of the remaining 10 follow-up moves. Now, is that good or bad to play like a computer?

The fourth round set me against the local matador, a junior who surprisingly had beaten a Polish FM in the first round. I was soundly beaten as well. Now I was back to where I had started, at zero balance. In my tristesse, I was contemplating to buy one of the colourful paintings of Mariya Yugina on display, which shows a brighter side of life and chess.

Another loss in the fifth round against a formal full-time chess teacher. We skipped the post mortem in favour of a discussion on the Munich Chess Academy which provides chess lessons in various Munich public schools, very interesting and encouraging. In my time as a junior, these were exceptions, nowadays that seems to be more the rule and the distinction of a good school.

The sixth round generated mixed feelings after I broke my own principles to calculate seriously in endgames. I drew finally, but only after I could have won quickly and subsequently could as quickly have lost. Pawn endgames require accurate calculation and rarely draw. 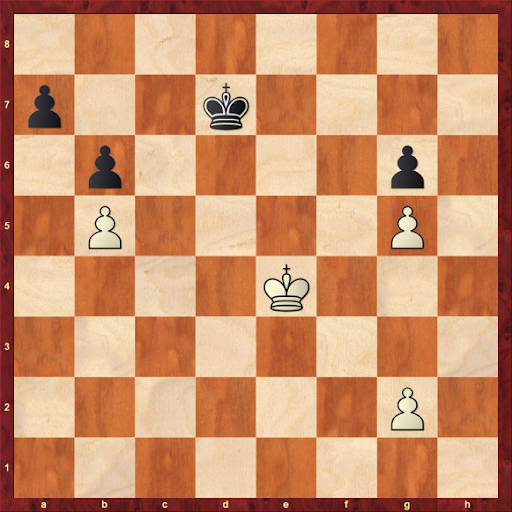 Ke5 would have easily won the pawn race (White´s g vs Black´s b) respectively the subsequent queen endgame because White queens with check after having drawn the Black king to a8 and can exchange queens; my Kd5??? draws with difficulties.

As a punishment for my stupidity, in the 7th round I was paired against a 300 points higher opponent and lost, though only after I had given him a fright in the fifth hour of our game. Alas, loss is loss. The only consolation for now being at minus 2 was that my chances for easier opponents in the last 2 rounds had improved considerably.

Thus, in the penultimate round I was paired against a lower-rated lady from Austria. In the opening, the lady saved her queen with a pawn sacrifice as is demanded in real life at the royal court, though in chess the opposite is sometimes better: 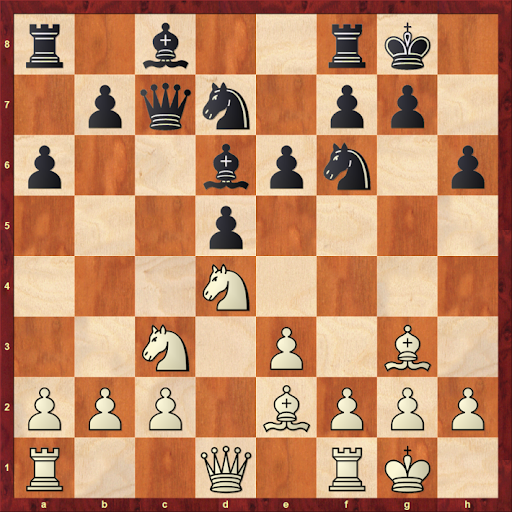 My 14.Ncb5! axb5 15. Nxb5 Qc6 16.Bxd6 won the a-pawn and finally the game. But wait, later at home the computer surprised me with Black´s alternative of a queen sacrifice for 3 minor pieces, starting with 15….Bxg3 16.Nxc7 Bxc7 (computers don´t value old court rules anymore). The engine evaluated this with total equality 0.00, meaning it does not know what to make of the situation, and I might have struggled as well over the board, never having had this material distribution on board.

Dear me, the win catapulted me back into the higher pairing section and I again got an opponent 250 points above me, and this with Black, not a good basis for the last round. But the young player was apparently tired after 8 days of chess, or because the last round started in the morning, and he early on made a mistake which I was able to exploit to get a lasting structural advantage and finally bring a full point home.

So, with a little luck in the end, I had achieved my target of a 50% score, and thanks to the strong opponents an increase by 37 ELO points. First price was shared by 2 Ukrainian GMs with 7.5 points, Vitaliy Bernadskiy and Pavel Eljanov, half a point above Gata Kamsky and 10 other GMs. Of the other players mentioned in my text, best was the chess artist with 5.5 points, half a point above her husband GM. The chess teacher was at 4.5, my young tiger-supported opponent of the first round at 3.5 and the sole English player at 3. By the way, no German in the top-ten which shows the strength of the international participation.

If you want to start sooner, on a smaller scale over a weekend and closer to London, there is the Bunratty International Chess Festival (Ireland) where sound Hammer representation is guaranteed, 21.-23.2.2020: www.bunrattychess.com

I start with a disappointing announcement that El Chessico is being delayed and will not take place on the 4th December. Due to various factors, Aldo and I have taken the decision to postpone the match until the New Year. Christmas fortunately is not postponed.

It will still take part on a Wednesday night and I have submitted four suitable dates. I will keep you all posted.

However, I am delighted to announce that Hammer member, top man and a Grandmaster to boot – Keith Arkell – will be taking on 25 Hammer members in a simultaneous challenge on Monday the 9th of December at the Anvil, kicking off at 7pm.

This is a brilliant challenge and the first twenty-five people to register are in for a real treat. The evening will cost each participant £1.50… cash on the night.

What you need to do:
– Be a fully paid member of Hammersmith Chess Club for 2020
– Email Lord Clueless on john.white49@ntlworld.com to confirm participation as soon as possible

This is a great event for the Yuletide season and brought to you by Hammer Chess Productions Inc.

Our last puzzle was from a sub-genre in the field of chess compositions. It is a help mate, that means Black does not always make the perfect move but assists in the mating sequence. The correct sequence was:

This week’s puzzle requires White to move and win. The study is known for making one person famous because of a single move – a dream we club players all share. Fernando Saavedra, a Spanish priest, found the solution to this previously thought drawn endgame while living in Glasgow in 1895. He was a weak amateur player. 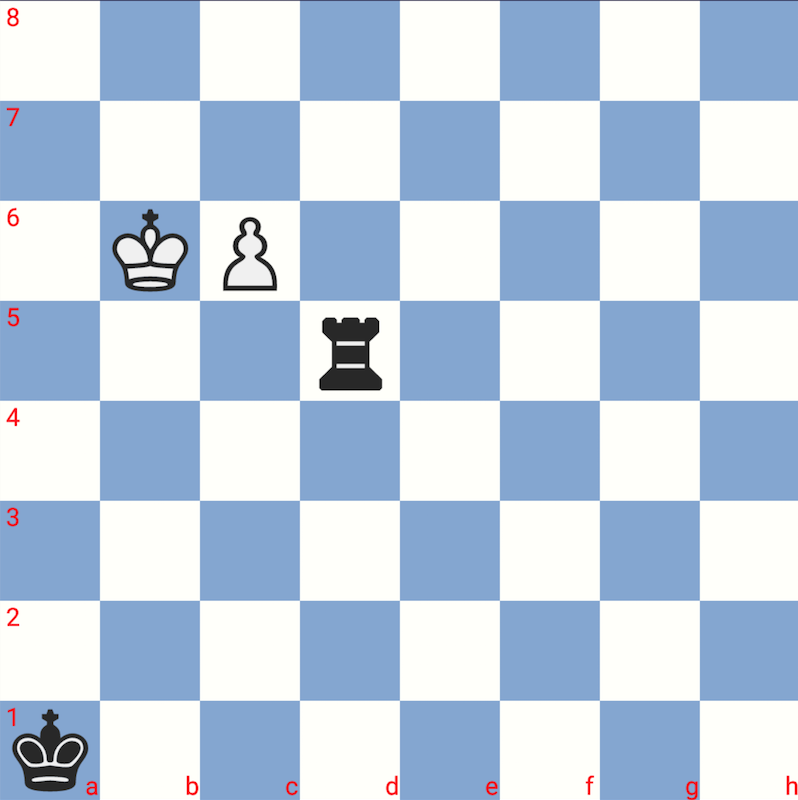 Answers in the comments below!