A double-dose this week – A pre-Christmas fixture report and one from the resumption of the league last week. After a slow start, Hammer are starting to get into their stride so a battle against league leaders Hackney, and one against one of the struggling teams – Imperial – would give a true indication of our team.

The first match was against Hackney – League leaders and one of the perennial powerhouses of London League Chess.

First of all, this was a superb performance by Hammer – IM Mark and Chris D were in scintillating form and played very forceful chess.

Here is the scorecard:

IM Mark was in awesome form against a tough opponent, and all-round good guy, Bob Eames. Mark was never in trouble and I ask you to just enjoy this demonstration of forceful chess:

Next up was Carsten, where he had to be very careful in a tricky position – I think his experience counted for a lot here when if he had over played the position, he could have ended up in a lost position.

Next up was Lord Hurricane himself, my fellow peer, in a tough complex Sicilian he was always under pressure – he battled to the end with a possible stalemate in the offing. However, it was not to be. Hammer pegged back to 1.5-1.5:

It all came down to the final game – and Hammer have new member Krasen (Chris) who was fighting for the match victory.

Krasen has a truly combative style – it is as if complications suit his temperament and bring out his best chess – this is a deadly positive in rapid chess.

This was spectacular stuff and worthy of close study:

Yes, not for the first time Krasen had ensured a Hammer victory – a great result and definitely a marker for the future.

The first match of 2021 saw Hammer taking on Imperial College – Jonathan’s old alma mater – this match on paper should have been a certain Hammer victory.

For once, life followed the script and Hammer duly delivered the win. Here is the scorecard:

A clear Hammer win – the only draw from Ryszard – but what a game! Indeed, the endgame is worth serious study – I know he has posted it on the Hammer chat.

All I can say is he stole half a point from the jaws of defeat after an uncharacteristic error in the opening. This is a fascinating game:

Hammer all square and up next was Carsten. I have to say that Carsten is probably the most classical chess player in the club – he is steeped in chess literature and is very correct. This was a perfect illustration of his style. Controlled the middle game and excellent endgame technique:

Next up was Krasen, whose game was first to finish. This was an all-out assault from about move 5 when he had four pieces in the game and his opponent one. This was hyper-aggressive chess with no holds barred attitude. This is a terrific attacking display. Plus it put Hammer 2.5-0.5 up – match point secured.

Finally, to our board 4 Jonathan, who was again in superb form. He was in control from move 12 and displayed a deadly accuracy at the end to finish his opponent in good time.

This gives the following table:

Lord Clueless is in excellent mental health and dead proud of these Hammer heroes.

On a final note – the hidden chess player in my last report was the unique Tigran Petrosian – probably the most different of all the World Champions.

I have not included one this week, but invite all readers of this article to share one good thing from the last 10 months of OTB chess starvation in the feedback. It does not have to be chess!

One good thing, I have conquered the skill of making puff pastry from scratch – none of your Delia cheating – this I regard as a significant accomplishment.

It is time to accentuate the positive and start looking forward to a hopefully better 2021 – world and chess wise.

I want to start with a bit of history – the year is 1816. It was the year without a Summer, massive crop failure, hunger, riots and rampant disease – all caused by a massive volcanic eruption on the island of Sumbawa in Indonesia that happened the previous year. It was a very, very dark time.

Fast forward 200 plus years to 2019, when humanity has suffered another catastrophic event despite its massive progress in technology, housing, medicine and institutions. The Covid-19 pandemic has affected all of us. It has taken away lives, businesses, jobs, our family and social circles, and for the sake of this article, our wonderful game of chess in the over-the-board format.

On top of that the social side of chess has been put in cold storage, and has put severe pressure on the very survival of chess clubs – the bedrock of chess in the community.

What have we been doing at Hammersmith Chess Club to keep going and engage with our members?

The Hammersmith Committee has worked around the clock to provide online lessons, events and tournaments to fill this void. Two particular heroes have been our online mentor Christof, and Club Secretary Adam.

Most of these initiatives have been down to these two Hammers and a supporting cast, and we want to put on record our tremendous Thanks them for some truly herculean efforts.

None of this would have happened without them – thank you, gents!

We would also like to thank all members who have paid their subs for the 2020-2021 season – your commitment and dedication keeps us going, and has really helped secure the future of the club.

At our last Committee Meeting in December 2020 we discussed the likely total absence of Over-the-Board chess this season.

In light of this, it was agreed that all membership fees paid for the 2020-2021 season would instead count towards membership for the 2021-2022 season, when we hope to see the return of OTB chess.

Thus – if you have paid your subs for this season, you will not have to pay subs again next season.

This also means that anyone wishing to join the club right now will only have to pay a single fee to participate in all our membership activities for the remainder of the 2020-2021 season, and the full 2021-2022 season!

There really has never been a better time to sign up! Drop us a line if you’d like to join.

Thanks again to everyone for your support, and we look forward to seeing a return to OTB chess later this year!

*Note:  this article was written while London was in Tier 2*

We live in a time where not since the Great Wars has chess been affected so, life is precious, though losing the things we love that make us human has been just as damaging to many.

With the release of Queens Gambit on Netflix, chess has never been so popular – though for many club players it has been a stab in the heart. There is so much potential, though even living in a digital age (where Hammersmith continues to run online tournaments, coaching sessions, puzzle groups etc.), with the regular clubhouse closed it is not quite the same as over the board chess – staring into your opponents eyes, watching them sweat as your pieces slowly surround their King, waiting for the time to strike.

Looking over the channel to the European mainland, where over the board chess was once again beginning, created much discussion on how we could play across the board again. We didn’t want to break any of the Covid rules where other table sports such as Dominos have seen players fined: (https://www.bbc.co.uk/news/uk-england-london-55503852).

On top of this, we didn’t want to risk the health of our members either. Therefore, as London was in Tier 2 at the time – and armed with masks, gloves and hand sanitiser – we descended upon the Prince of Wales Townhouse – a newly-refurbished pub in Hammersmith which had an amazing heated outdoor area, ideally suited to a meetup. Adhering to the regulations, we all had a substantial meal and sat on a table of six, where we ensured extra precautions were taken for any members who felt more uneasy.

It was a fabulous evening of interaction and our beloved pieces were dusted off to once again brave the board. From old friends who we have not seen in many months, to new members who we have only met in a digital setting prior, the spark was alive again in Hammersmith – if only for a moment. 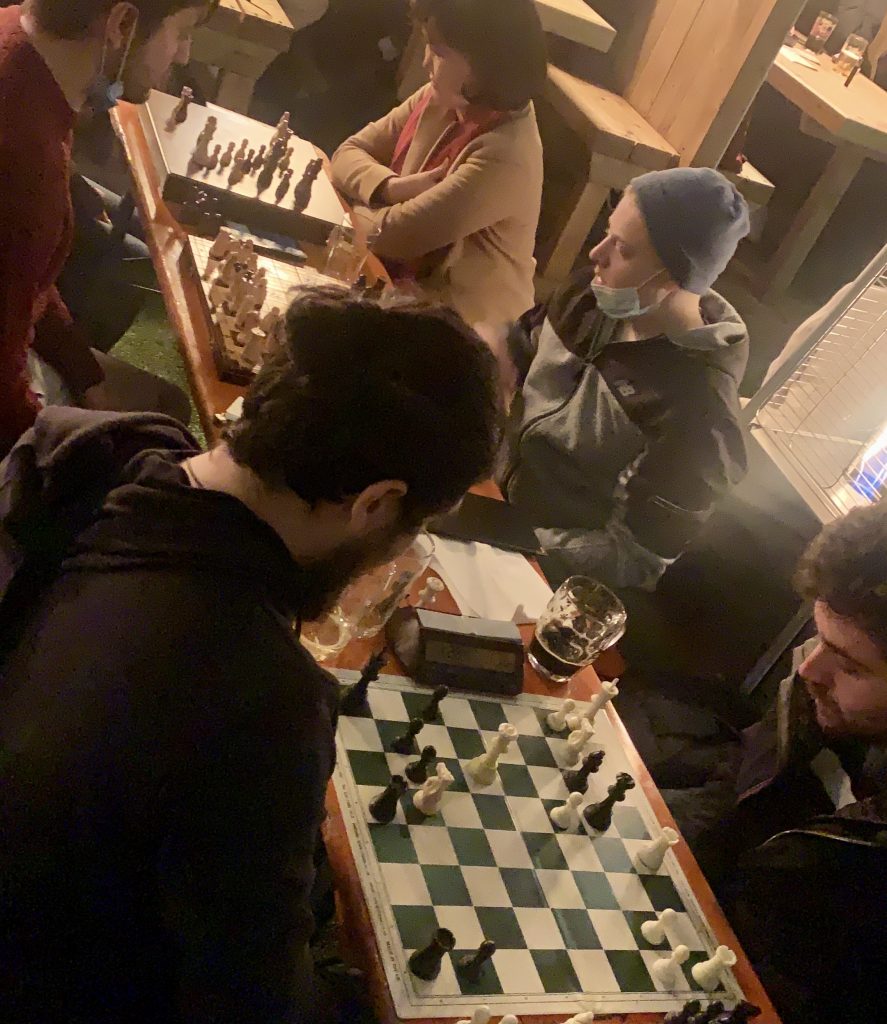 As we go into another lockdown the mighty Hammers are getting ready for 2021! We will play again, and it will be brilliant. In the meantime, join our online community and warm up for the action to come.

I will leave you with this ‘Hand & Brain‘ position which was played between some new club members, and some ‘soon-to-be‘ Hammers. White to play and draw. 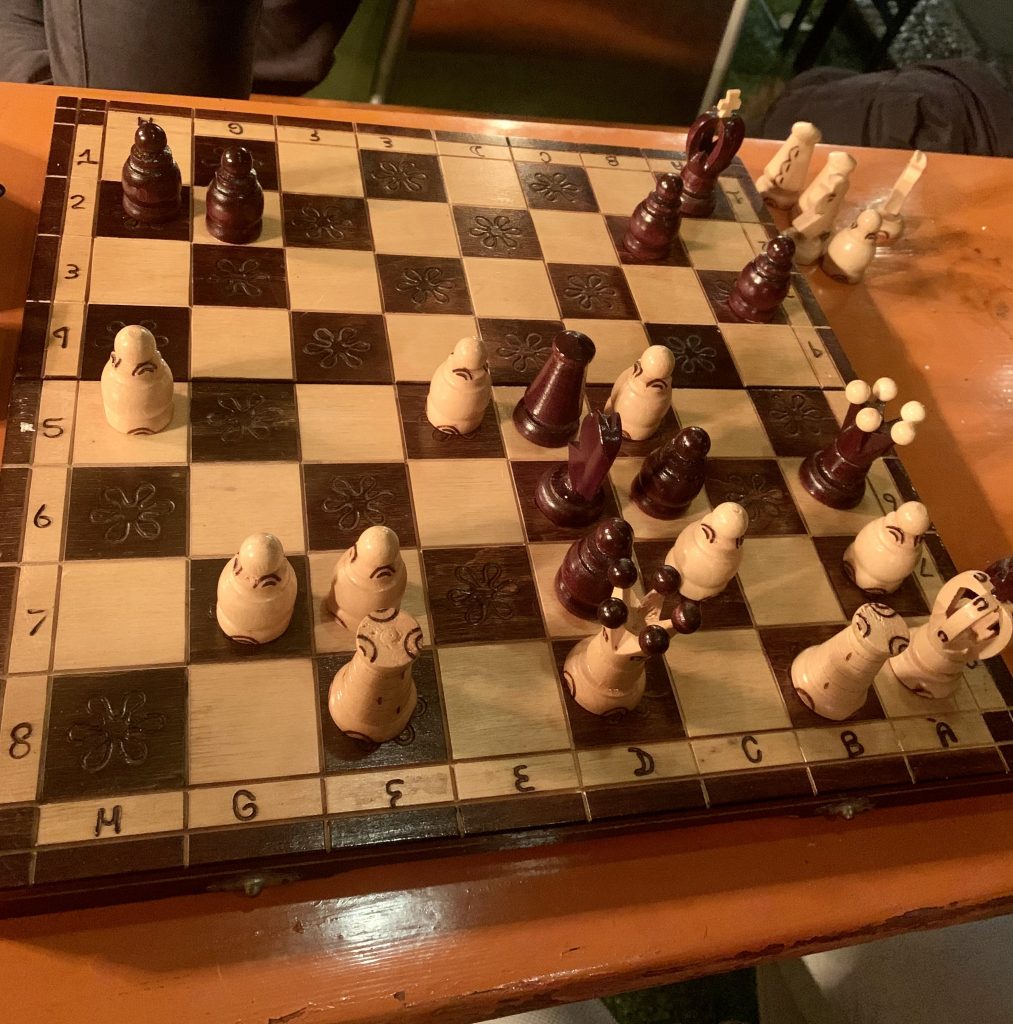 (Note: Hand & Brain is a 2v2 match where one player on the team says which piece is to be moved, and the other player has to make the move with that piece without conferring! e.g. You say ‘pawn’, then your partner can move any pawn anywhere they want).