Hammersmith’s 2017 Reporter of the Year, and Thames Valley captain, Robin Lee, takes us through last week’s away trip to the outer-reaches of West London, followed by the latest dispatches from the Middlesex 2 battle front, courtesy of 2018’s Reporter of the Year, John White. All rounded off with some details of this year’s Czech Open. Do read on…

First to finish was Javi on board 5, his French Defence taking the point, so score 1-1 and balancing our default: we were short one player. Javi has definitely improved his openings in the last month.

This was quickly followed by Kostis on board 4, with a dogged anti-Sicilian leading to a stranglehold on the black king. This Kostis exploited, and soon enough came the win with blitz style finish, and score 2-1.

Your captain on board 3 with the black pieces meanwhile, dug in, facing an unknown 1.e4 2.Bc4, that my opponent thought was called the Bishop’s opening. It just didn’t compute. I tried to make it a Scotch Game, maybe equalising. After some to and fro, black attacked the white king with a diamond cutting tool, two bishops scything down on an ill-protected king.

White dipped his king, in view of the inevitable rook and queen coming to deliver checkmate. Score now level-pegging at 2-2.

I turned to watch board 1 and saw John White a queen up. It was fascinating, watching our top board with a queen, rook and minor tackling two minors and rook. A very comfortable situation, as John encroached on the opposing king, having only to diffuse the danger of two advanced, linked pawns in the centre. Yes, the win was inevitable, score 3-2. I thought I saw a smiling Cheshire cat, sitting on the window sill in the room.

John’s game is given below, with additional commentary beneath:

10. 0-0, 0-0 – Atrociously played opening – was trying to tempt an early e5 and retreat my knight back to g8, to get him totally out of his book – he didn’t bite.
19. f4, exf4 – White throws away advantage, I gain the upper hand, the new reality, to which he doesn’t adjust, common to chess players of all strengths.
24. Be2, Ng6 – I make space for my Queen on g3 and also float another piece towards his king.
27. Rg1, Re5 – partly psychological – gains a huge error but his time trouble makes me opt for this move, followed by 28…Nxh3
37. Re1 Qf3+ – the rest is mopping up and simplification

Meanwhile on board 2 John Goodacre was coincidentally battling a junior in blitz style, with knight, king and pawns versus knight and king. In contrast to John’s sedately played game, it was all fire and smoke on the other board. I thought I heard a groan, as the junior came to the last minutes on his clock, with John G almost an hour up. Possible he just signed or made the wrong move on a theoretically drawn position. Unlucky. So it ended 4-2.

John G later commented, “these teenagers… are a bit sharp. I am usually better tactically than positionally, so their strength is the same as mine. I was rusty… but he was under a lot of pressure, and he could calculate.”

Definitely things to ponder there, thankfully we had a win.

Maidenhead was a long schlep getting there, but we were flying back on empty roads. The Albion beckoned us as we reached terra firma, the whole Hammer crew – Adam, Chris and Carsten – and Monsieur Cornette welcomed us back. Charlie, Wyatt and David were doubtless celebrating over in Holborn; they knew our win thanks to WhatsApp. Yeah, we were a tight crew, bonded by our chess camaraderie. What’s not to like?

I think this was fortune smiling on us this time, possibly only a small uptick in our seasons’s poor performance. Who can say?

A Valentine’s Tale of Extreme Valour

Believe it or not there are times when even Captain Clueless is lost for words. This is one of those times, but then it would make for a very tedious report regarding the heroic rearguard action fought by the Hammer crew this Valentine’s day past. This was epic stuff, against all odds and a firm reminder of the enduring spirit of Hammer Chess Club. Hence, this report is full of hyperbole and slight exaggeration. Definitely not fake news, but shall we say slightly embellished.

First of all, this skirmish was fought on the day of love – a touch choice for anyone – the love of your God (Caissa) or the love of your beloved (Valentine). Surely they are one and the same and nobody should ever have to choose. I leave you to reflect on that.

Non-playing captain Clueless had to make an early exist – I am afraid the love for Karen or possibly the potential ire of Karen, made my decision inevitable. Dave and Adam stepped into the breach.

On boards 7 and 8 we had one new Hammer, and one veteran Hammer.

Navarone (“Nav”) was making his league debit and hence in time-honoured tradition a nickname is designated – he will be known as “VR” – in tribute to that most brilliant batsman Vivian Richards (a true sporting hero of mine).

Board 8 saw Dave Lambert making his debut fora  team I captained. My memory may be failing (definitely) but I think this is the first time it has happened in 4 plus years. All I can say is – he is one of Hammer’s finest and will now be known as “Toffee” – in honour of his beloved Everton and his resilience at the chess board.

Things did not start well – VR got deleted and had to default. Toffee moved up to board 7. Zeus and the Suit were delayed by work and the vagaries of the District Line, and arrived 30 plus minutes late. Add in the fact that the Metropolitan Chess Club is harder to find than any integrity in Donald Trump, made it a stressful time for Clueless. The clocks were ticking, Clueless’s BP was going North, and Karen was waiting… Valentine was not happy.

All I can say is the team performed heroically to a man.

I was still in the building when Toffee agreed a draw, Zeus and the Suit had yet to arrive. This was totally solid stuff from Toffee – playing the white side of a Sicilian Dragon, he was never in danger and was an exchange up but with vulnerable pawns. A draw was a wise decision. Hammer 0.5-1.5 in arrears.

With Zeus and the Suit in situ, Clueless made his exit – worried, anxious and apprehensive – we were out-graded on average by approximately 10 points a board and we were 30 minutes plus down in two games on the clock. These were dark times.

There was a news blackout in the Clueless bunker, and then suddenly via the wonders of that modern-day carrier pigeon, WhatsApp, at 9.16pm Captain Toffee reported a famous victory. Hammer had seized the day and had won by 4.5-3.5!!!

This was just sensational stuff.

Wins from Zeus, Dead-Eye and Brexit – the Hammer vets leading the way. With solid draws from the Gift and Pickle – added to Toffee’s earlier draw, saw Hammer nose it.

I have asked for some PGN’s but so far only Zeus – as a good God should – has delivered. He was as usual completely scathing of his effort with such comments as “I blundered three pawns for no real compensation…”. Personally, I think it was a Petrosian-like masterpiece – here is the final position with our man/God as white: 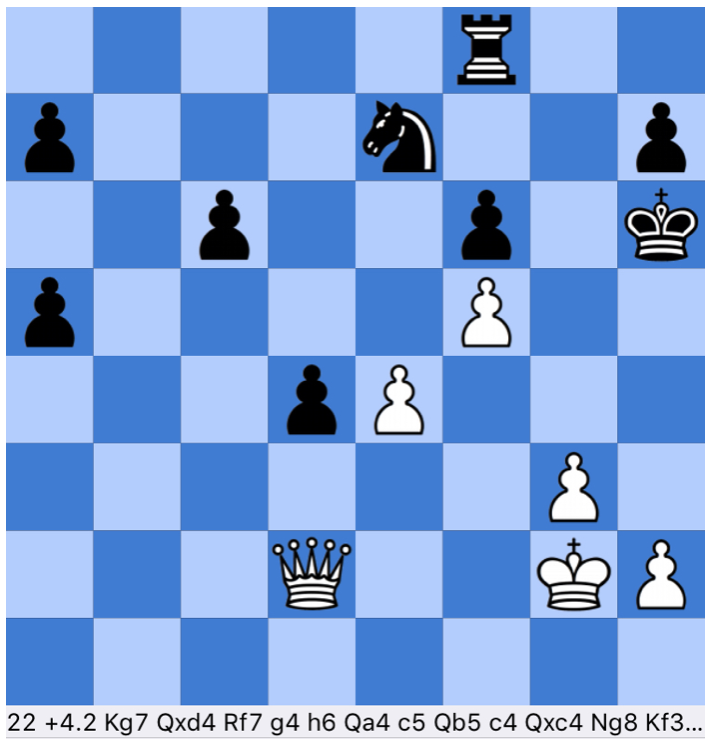 The one thing that can be said is this result has done us no harm in our quest to retain Division 2 status – a testimony to the spirit of the team and their true fighting nature.

Here are the match card and latest table for your delight:

Yes, we went there. Anyway, the 19th International Chess Festival Series – Czech Tour 2019/2020 and the International Czech Open, have both recently been announced – what could be better than some Summer chess in the heart of Europe?

Dates and locations are as follows:

Terrific tournaments, with sections for all levels of players, inc. the amateur patzers, so if you fancied combining your Summer hols with some Chess, here’s how you do it: