A couple of recent match reports follow, but first up some exciting news from chess-site.com:

In a sign of our increasing reach, and a digital ‘pat on the back’ for our ongoing efforts to improve the club, I’m pleased to report that Hammersmith has been added to the illustrious list of “The Best Chess Clubs” on one of the top chess resource websites in the world, chess-site.com

Taking our place alongside 11 other top performing clubs world wide, it’s a huge honour to be mentioned in the same breath as the likes of the world-famous St. Louis Chess Club, and the Bangkok Chess Club. [dis-honourable mention to our frenemies at Battersea!]

As fellow lovers of the game, John Jackson, the CEO of Chess-Site, and his team, have written up a wonderful and generous profile of Hammersmith, as part of their mission to produce a definitive one-stop resource for the game.

Their website contains a ton of useful information for chess-lovers, and is a terrific resource for anyone with an interest in the game. Well worth a read and a share, and we thank John for taking the time to profile us. Long may the association continue!

Happy new year to all my Hammer colleagues and comrades. We began the first of six matches in January/February with a visit to one of our main rivals for promotion. The anticipated difficulty of accessing their base somewhere in the depths of Middle Earth did not prove to be quite as baffling as anticipated, the match however was a sterner test of our resolve.

My apologies for being blunt, but an issue has been growing over our opening four matches which I cannot avoid mentioning.

How seriously does Hammersmith, both as a club and we as individuals, really care about having a team in London League D1?

Of course, I fully understand that we all have very busy schedules, of which chess can only be a small part. Also, as a relative newbie, perhaps it is not for me to say. But still, with our resources, while promotion to D1 should be very do-able, the reality is a little different. As it stands, our promotion chances appear rather slim.

For whatever reasons, a sizeable minority of nominated players are unable to play regularly. A very unhelpful state of affairs. This is then compounded by the restriction on bringing in players from second and third teams, since this would quickly bar them from those teams. Worse still, our fixture list is so congested that asking people to play at short notice is rarely successful.

One thing I would ask for is for people to at least reply promptly (or indeed at all) to say whether they can play. A “no” is much preferable to no response.

Okay, with that little moan over with, on to the match. I will say that everyone gave the proverbial “110%” effort befitting a Hammerite. Particular thanks to those stepping in at short notice.

The match went very much to expected grading results. Although Thomas lost a complex struggle on top board, Carsten, Tony, Bajrush and Sylvain powered to convincing wins on boards 2-5. Bajrush continued his imperious form with a fourth straight win in his inimitable style. Hopefully he will be annotating his game for us shortly. We were also assisted a little by Met’s late substitution on board 2.

Alas, the engine room stalled a little on boards 6-8. Tomasso going down, while myself and Paul laboured in vain.

The last two games to finish, both ferociously fought, saw Charlie and Wyatt finally forced to tilt their kings in defeat. Nonetheless, great fighting chess by both against much higher graded opponents. 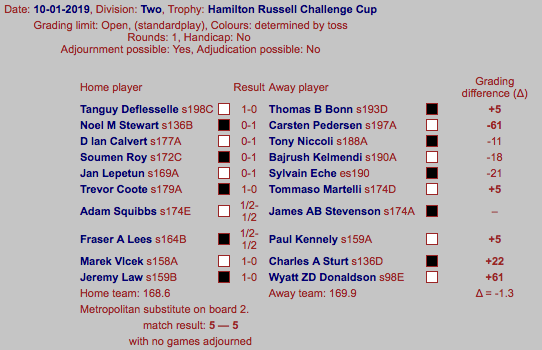 So the match ended 5-5, which can be interpreted in either glass half full or glass half empty mode as you prefer. We play five more matches before the end of February – Hammers, over to you!

From social media this week, the London Chess League (@ll_chess) were spotted canvassing opinions for a new, London-wide Rapid or Blitz league using a Twitter poll.

The results were more resounding than the Prime Minister’s recent defeat – with a whopping 97% of respondents in favour of the launch of a London-wide Rapid or Blitz (or both!) league.

Food for thought indeed… we’d be keen to hear the views of Hammerites! 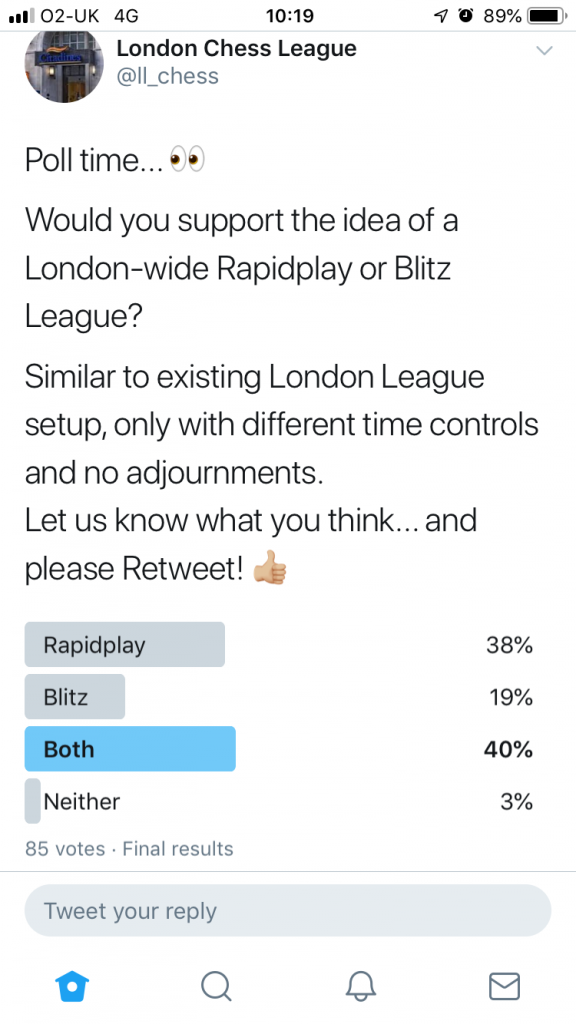