Monday 17th October could mean only one thing – the start of this year’s Middlesex League, at least as far as Hammersmith were concerned. Excited expressions were present across the faces of all who attended, as Lytton Hall was to play host to the might of Ealing 2.

Having narrowly been relegated from division two last year, we knew we had something to prove. As such, many seemed surprised by my decision to rest four of our top five boards. However, with our opponents coming into the match in bad form, and having heard rumours about their possible starting lineup, I was confident our middle order would pull through.

Play got underway at 7:30 sharp, and it was clear from the outset that both teams meant business. Sacrifices and zwischenzugs came flying across the boards at all angles, with spectators struggling to take their take their eyes off the boards to tend to their cups of tea.

First to finish was Alex Meynell. An assertive “checkmate” coupled with an astonished yelp were audible from board seven. It was clear what had happened. Alex had slyly wound his opponent up in one of his infamous opening traps and turned the screw. His disappointed opponent left the hall after just an hour.

Next up was board three. Sheikh Mabud, playing as black, faced Bird’s Opening (1. f4). After much deliberation, Sheikh decided he was not sufficiently up to speed with the notoriously double-edged From’s Gambit (1…e5!?) and instead responded with the main line (1…d5). Sheikh was further caught off guard by his opponent fianchettoing his queen’s bishop and attacking fast down the kingside. Sheikh held his nerve well. He proceeded to force tripled pawns on the g-file before coolly mopping them up with his rook. What followed can only be described as a meltdown from his opponent, who offered his hand in resignation before the time control.

Yours truly was third to finish. After my last four games for the club with the black pieces, I was relieved to finally have the first move. 1. d4 g6 2. Bf4 Bg7 appeared on the board and it seemed my opponent was happy to sit back and allow me to play in my favoured positional style. It transpired that he was to be the architect of his own downfall. After firstly failing to castle behind his fianchettoed bishop, he developed his knight to d7 where it found itself trapped by my queen’s pawn and blocking in his light-squared bishop. Weakening his pawn structure with the premature a6 and h6 were to be the final straws; soon his poorly developed pieces were overloaded, and resignation came on move 25.

Brian Dodgeon looked absolutely in control of his young opponent from the first move. His experience allowed him to gradually improve his material and strategic advantage, effortlessly negating his challenger’s attempts to attack down the queenside. Soon Brian’s passed f-pawn became unstoppable, and resignation was inevitable.

Dave Lambert clinched the fifth win and victory for the team. With his opponent’s king boxed in on h8, he sat for a long time, calculating, trying to find an elegant smothered checkmate. With time running low, amazed at his inability to procure the elusive mate, Dave calmly switched plans, instead pushing home his material advantage in the shape of two strong central pawns.

Fresh off the back of his dominant debut for the club, new member Orial O’Caithill was looking to maintain his 100% streak. Entering the endgame with two knights and five pawns each, Orial’s superior pawn structure and flawless technique appeared as if it was going to make the difference. With 20 minutes on his clock versus his opponent’s two, Orial hung a knight, gasping in frustration. Unwilling to trial his bullet chess skills, his opponent offered a draw, which Orial gratefully accepted.

After two and a half hours of play, Yasser Tello had reached a dead drawn endgame. With each player having an almost identical pawn structure and one knight apiece, spectators were perplexed by his decision not to take the draw. Yasser’s ambition paid off – after some Carlsen-esque maneuvering and a couple of seemingly innocuous inaccuracies, his opponent suddenly found himself in zugzwang. Yasser’s king entered the black stronghold and ruthlessly mopped up the pawns.

As the night drew to a close, everyone found themselves gathered around board one. Paul Kennelly looked to be dominating with the black pieces. He had a strong knight versus a weak bishop, and was pinning virtually all of his opponent’s pieces. As the inevitable time scramble commenced, calculation was out the window and instinctive mayhem ensued. Paul’s frustration was apparent as his opponent miraculously consolidated his position and won a pawn. A clever tactic sealed the defeat – white sacrificing his pawn with check to discover an attack on the black queen.

All in all, a very good start to the season. Next up is Harrow 2 at home on 14th November, where we’ll hope to face a slightly stronger team but win by an even bigger margin! 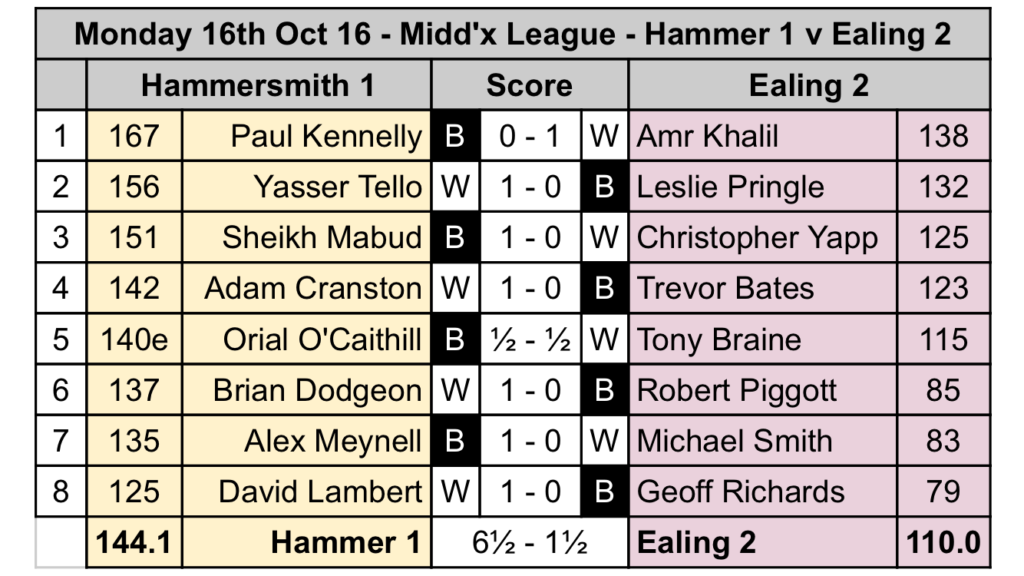 A Tough Match to Start the London League Season for Hammer 1, by Captain John White

Hammersmith went down 3.5 to 6.5 away to Cavendish in our opening match for the newly-promoted team.

We really missed the experience of Paul Kennelly and Jeremy Hodgson owing to holiday and other commitments. However, new members Jay Hinolan and Matteo Bezzini stepped up to the plate.

Jay suffered a loss in his first LL match – due to a heavy cold he was not in the best of form. He’ll be back stronger – having seen him beat Sue Maroroa in the simul during the Summer, I know he was well below his best here.

Matteo playing black got a draw – a solid start to his London League odyssey.

Both of these guys will be great assets for Hammersmith in the London and other Leagues this season. Welcome aboard!

To the rest of the games – the highlight was John Woolley’s return to form with an excellent win. Fighting draws from Brian Dodgeon, Bajrush, John Goodacre (great to see him back!) and yours truly.

Sheikh, Safi and Alex all had tough losses – early season blues I think.

A disappointing result but we were out graded by 15 points or more from boards 2 to 6.

We’ll be back, and stronger next time! 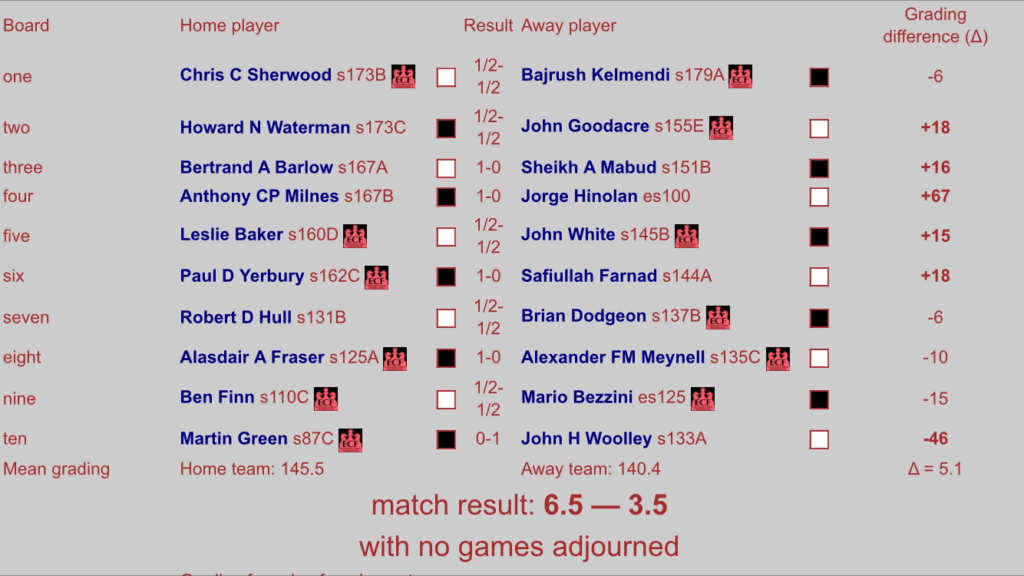 Hammersmith Chess Club has been around for a while – since 1962 to be precise. That might seem like the fairly recent past to some of you – perhaps even living memory for many of our members – however for those of us born after 1980 that is, quite frankly, a different era. Up there with pre-history for the millennial generation!

To bear this out, indulge me for a moment while I recount some of the events that happened in Britain in 1962.

I don’t need to point out that mobile phones didn’t exist, nor did the internet, home computers, concorde (now since retired!), Malawi, CD’s, Z-Cars, Steptoe and Son, and England were yet to win the World Cup. I could go on…

My point is, we have been around for a long time, and it’s only right that some of that history is recorded and shared.

Luckily for us our ever-diligent club Secretary, Mike Mackenzie, recently re-discovered a treasure trove of historic material about the club whilst tidying up our equipment cupboard. As long ago as 1967 we were producing a regular newsletter for members. I’d like to share a few snippets and factoids from those fascinating records.

As you can see, it’s been an interesting 54 years since the club first opened its doors. Times have certainly changed since then, but I wonder if the game itself has changed much in those years? Over the next few weeks we’ll be putting up some of the games from the archive newsletters so we can have a look to see for ourselves. See you soon!

I’ve only been playing competitive chess for a few years – one season for Denton whilst in Manchester before joining Hammersmith in early 2012. Back then I wasn’t thinking about captaining a team. I was happy to just turn up and play.

I remember having a conversation with my captain one day in the usual post-match post-mortem – I think he may have slipped to a disappointing draw. “Captaining a team takes 10 points off your grade” he chuckled to himself.  How could that be? It didn’t seem that hard – you just send an e-mail a few days before the match asking who wants to play? Then you toss a coin as the match kicks-off to decide colours. Easy…

I’ve been a captain now for approaching two full-seasons so thought it might be interesting to double-back on that throwaway comment and see if it carries any weight.

I finished the 2014 season on a grade of 127, and at that time took on the mantle of captaining our team in London League Division 4.  It’d be a challenge: our team was likely to be graded in the 140-80 range and yet we’d regularly come up against teams with a 120-130 on bottom-board; a 175 on Top Board wasn’t altogether surprising either. Still, it was about getting games and ensuring that we were able to follow-through on providing league chess for our newer members.

The season was a difficult one – even factoring-in the other matches outside the league, I ended the season on 34%. My Jan’15 grade was 117 and my final-year grade was 121 – a total of 6 points lost like-for-like. But fast-forward a few months and I was back up to 126. All things considered, I’m not sure there’s much in it. The more cynical amongst you may argue I didn’t have that many grading points to lose in the first place!

Still, I wouldn’t say captaining a side is without its challenges. Even in my short tenure, I’ve had to deal with:

Once I’m in the midst of a match, I tend to knuckle down and concentrate on my game – I’m not sure it’s much of a burden. The biggest stress I have is wondering whether my 8 players are going to turn up! That broad smile you see at 6:59pm in Golden Lane, when the last player rolls through the door, that’s a real one!!