A clutch of games for you this week – coming thick and fast as the finish line comes into sight. Read on!

It was a case of revisiting old rivalries as we faced Battersea in Division 4. On the one hand they’re a great partner club – working with us on the birth of the Summer Leauge, hosting us at their home venue for the El Chessico, and sharing some memorable matchups over the years.

On the other, they’re like a slightly annoying little brother. Trolling us on Twitter, calling themselves “Battersea” when they play in Clapham Junction. Too big for their boots!! This is one with a little bit of extra spice!

We played well, but the bottom-line is that we’re 2-4 down with the final couple of games adjourned for another time. The games are pretty tight but we have winning chances in both so things remain in the balance. To quote Kevin Keegan, I would love it if we got something from the match! Love it!

I sat out the match and spectated from the sidelines instead. This all meant I was able to catch a bit more of the action than I normally manage. Another observation is how slowly 3 hours seem to tick by when you’re just watching. It flies by when you’re in the middle of a game!

Things didn’t start well. We had an early faller on Board 7 as Chris succumbed within an hour. Picking up the Black pieces, Chris allowed an early check which forced him into a slightly cramped defensive position. His opponent played actively, kept up the pressure and managed to win a pawn. An unbalanced position resulted, and thanks to his Bishop being placed on a “stupid square”, a resignation soon followed.

Brian kept up his fine run of form on Board 1, chalking up yet another win. He’s now unbeaten in 8! He initially looked in trouble after being forced to move his King following a check with Bh5, but a locked-down position developed in the middle which meant his centralized King was in no danger. The setup seemed to play into Brian’s hands and he superbly marshaled the pawn chain to his advantage to raise the spectre of a decisive passed pawn.

The next two games contrasted in style but alas, not in the result! John, playing White, played his usual solid positional game and emerged in the early middle game with a respectable position. Ladies’ fingers were on a3 and h3, and we looked in for a long night. John’s opponent sensed a potential weakness in his pawn structure though, and began pushing g/h pawns to challenge it head on. A good tussle followed but John was forced to defend and as we all know, it’s a lot easier to attack than to defend. The breakthrough exposed the King and he graciously resigned.

Robin’s game started unusually quietly. Where was the pawn push?? Where was the sacrifice? We didn’t have to wait long though; the fireworks started soon enough. the pawn break came, creating a wildly unbalanced position. Unfortunately it favoured Robin’s opponent who held the centre with 3 (count them) extra pawns. Not one to give up, Robin brilliantly fought back with a Knight pin, but whilst material was equal, the position was not. Robin’s pieces were not coordinated which made covering all the potential attacks very difficult. A fork on Rook and Queen effectively ended the contest, despite an unsuccessful 10-move hunt for a stale-mate!! 1-3 down.

Josue starred in perhaps the most enjoyable match of the evening, at least for this spectator. The endgame was a bit of a thriller. He looked on the ropes in a Bishop/Rook vs 2-Rook end game, particularly when he was forced to defend a passed pawn one rank from promotion. But he had a passed pawn of his own, which he pushed whilst gaining tempo with discovered checks. The opposition passer was sacrificed with all hands on deck to prevent the coronation of a new monarch. Again, Josue found the right tactic and created a blockade with Bishop and King. Great to watch.

Finishing at the same time was Adam, who also found himself in a Knight & pawns endgame. It looked relatively level to me, but who’s to say what Fritz would make of it. Either way, nothing is easy when you’re short on time. It was the kind of position where you’d want 10 minutes per move, not 3 or 4 for the whole lot! Really unlucky. If the Knights were off the board it might have been a different result.

David P and Marios both have slight edges in their adjourned games, but they’re really tight. Probably best I don’t say too much with the games still going, but I know Marios feels slightly disappointed not to seal it on the night; he had pressure from move 1. David played very well to gain a pawn advantage but his wily opponent defended well. A 127 on board 8 – not too shabby.

The Middlesex League season is drawing to a close. Another fine win last night saw Hammersmith move to a whopping eight out of nine with three to play, and a colossal games score of 56-16. 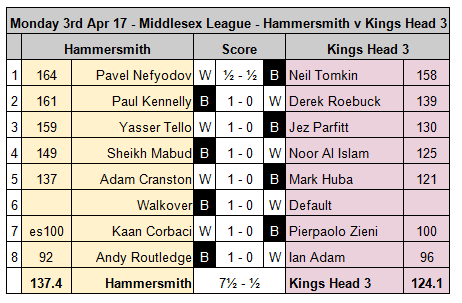 The games, in reverse board order:

Andy’s opponent played a very strange opening, placing his pawns on d3, e4 and f3 with his Bishop inside the pawn chain. Andy developed a large positional edge before a dubious Knight sac on e4 left his opponent with big chances to get back into the game. Andy continued to develop well though, castling Queenside and creating a dangerous Rook pair on the d-file. After his opponent’s passive Queen retreat to g1, Andy smelled blood! As he brought his pieces in for the kill, White elected to hand back the Knight in exchange for some activity. It was not enough to prevent the onslaught though; White soon resigned with mate-in-5 inevitable.

Kaan chose the English opening 1.c4, with his opponent choosing to adopt the tricky 1… c5 symmetrical variation. A sharp tactical struggle ensued, with Kaan coming out an exchange up. Without too much trouble he put his material advantage to good use, grabbing another pawn and soon the sustained pressure forced resignation on move 23.

A last minute drop-out meant Hammersmith superstar Robin was brought in to do battle. Or so he thought! With no sign of his opponent after 30 minutes, the default was awarded.

Adam’s London System woes this season were set to continue. His opponent chose a King’s Indian setup and castled early, to which Adam responded with h4. The early attack was destined to fail – with the e5 square not available for his f4 Knight, Adam brought it back to h2, where it stayed completely inactive for the next 19 moves! Castling Queenside added to the misery; Black immediately launched a Queenside attack to which Adam had very few pieces available for defence. The position was objectively lost, with at least 3 different ways for Black to cash in. Then the game turned.

Some slow and inaccurate piece-shuffling on Black’s back ranks allowed Adam’s hopeless h2 Knight to become a superstar! An h2-f1-e3-d5 manoeuvre brought it to the best square on the board, where it stayed for 6 moves, before gobbling up the Black Queen that was kindly placed on f4. A very lucky escape!

Disregarding his usual repertoire, Sheikh chose to adopt the classical line of the Scandinavian Defence. He proceeded accurately, developing his pieces in the correct order and blocking off all the light squares. He soon started attacking down the Kingside, and eventually overcame his opponent with a clever Bishop sac.

Yasser opened with the Queen pawn and faced the Nimzo-Indian Defence. Yasser chose the 4.Bg5 Leningrad variation, and soon obtained a positional edge and a strong Bishop pair. As Yasser pushed his pawns down the Queenside, Black’s position became more and more cramped. Soon he was forced to give up a pawn, which did nothing to stop Yasser crashing through and scoring the win.

Paul chose to adopt the solid Berlin Defence, and his opponent was not sure how to react. Several pieces were swapped off and before long Paul was in an endgame, but possessed the superior pawn structure. Paul’s superb endgame skills came into play, and before long he was exerting tremendous pressure on White’s weak spots. He coolly converted this pressure into an outside passed pawn, and his opponent resigned as his position started to crumble.

Pavel scored the only draw of the night, though it was by no means a boring draw. He chose to open with 1. Nc3, the Dunst opening. Play developed sharply, with both players castling on the Queenside and Knights hopping around the board creating lots of threats. Pavel gave up his Bishop pair to kill off one of the Knights, creating an unbalanced position that was difficult to evaluate. After a Queen trade and some interesting tactical shots well defended by both players, they agreed to call it a day.

Kaan and Andy become the 26th and 27th players to play this year, and bring the number of players sitting on 100% to 15! 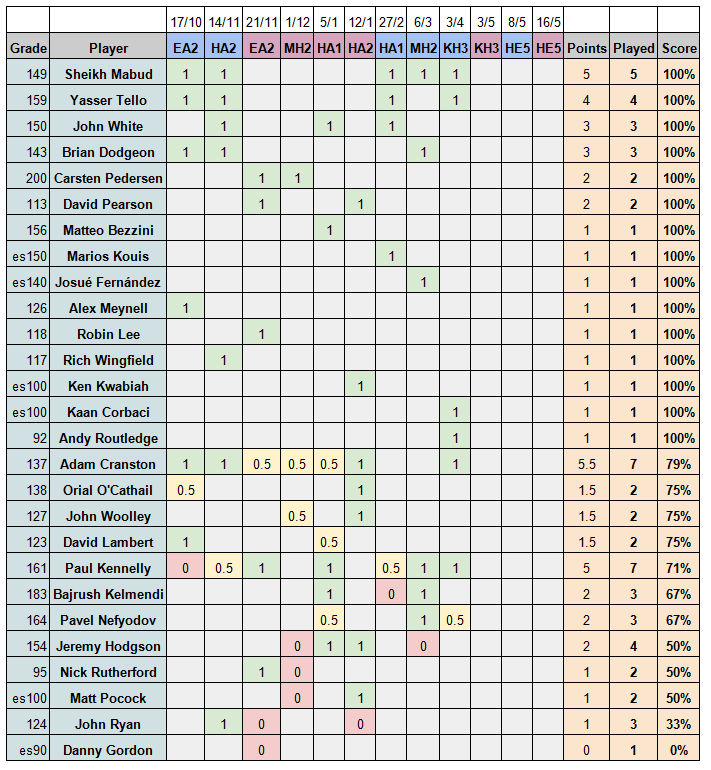 One thought on “A Busy Gameweek – Middlesex & London 4”