With four games to go in the Middlesex League and being at the top of the scoreboard, two points ahead of Willesden & Brent, the Hammers arrived at the Actonians Sports Club to play against Ealing, with no intention to negotiate.

It didn’t take more than an hour for the first two games to finish. Andrew managed a draw on board 3, followed by Paul shortly after on board 5 with a win after his opponent blundered from a position that was probably defendable. 1.5-0.5

Around ten minutes later, Jakub finished off his opponent in ‘rapid’ mode, going to a double rook endgame. Jakub played with confidence, blitzing his last several moves, which added even more pressure on his opponent, who had less than 10 minutes on his clock to Jakub’s 1hr 5mins! A rushed moving hoping to exchange both rooks and go into a pawn endgame, ended with Jakub a rook up instead. 2.5-0.5

Jakub’s game is presented here for your enjoyment:

A couple of boards down the order and things were starting to get clearer, with Ken bringing a second ‘lady’ into the game to finish in style. Ken made a mistake that could have cost him the game, but his opponent allowed him a counterattack which he executed precisely to secure our third full point. 3.5-0.5

On Boards 7 (Nick) and 8 (Javi), the games were almost over with both black sides up the exchange. Nick converted his advantage quickly, pushing his opponent’s pieces towards the King to deliver a deadly fork with his bishop, before shaking hands and securing the match for Hammersmith.

Javi stood his ground going to a rook vs knight endgame down the exchange. Unlucky! 4.5-1.5

Meanwhile on top board, Brian had an open position as black, having placed his knights in the middle of the board. After a couple of exchanges and a few tactical moves, a draw was agreed 5-2.

One game to go on board 2, with Jonathan having less than 3 minutes on his clock to his opponents 30+.

Carried away with the idea of running Jonathan’s clock down, his opponent missed a check-fork that would have wiped the White square Bishop off the board and instead grabbed the a2 pawn. 38 seconds on the clock and the material is “equal”, with Jonathan having a rook pair, a light squared Bishop and 3 pawns, to his opponents Queen, dark square Bishop and 4 pawns.

The game reached the position below with black to play and 3 seconds for Jonathan, who refused to drop his weapon.

Two blunders (…g3, Rd4+ Kg5, Kxg3 Qe5+) and Jonathan delivered the finishing blow to fork King and Queen with f4+ and one second on the clock. If only he had 20 seconds on the clock he could have even won the match (mate in 10). But saying that… his opponent would not have played so recklessly, as he was obviously focused on running him out of time, when he would have been better off using his advantage on the clock to outplay him – by probably chasing the rook and/or bishop over the board rather than the King. 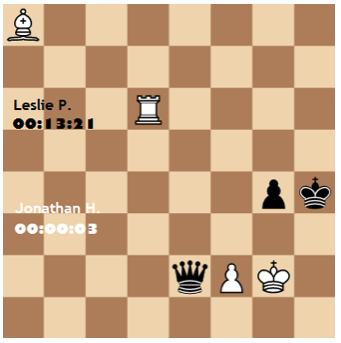 A 5.5-2.5 win for Hammersmith then, and a very good chance of being promoted!

2 thoughts on “R-Ealing from a Hammer Blow”