Get excited! Our Summer Programme is back for 2018, bigger & better than ever! We will be upstairs at The Albion every Monday night this Summer, putting on a host of different activities:

The club’s top players will be hosting a total of SIX training sessions throughout the Summer. Specific details will be announced nearer the time, but we already have some great things scheduled.

ECF-accredited coach, Paul McKeown, will host a pair of sessions (9th July & 30th July) focused on “Calculation and visualization with Michael Tal” – each session aimed at different strength players, though as with all our events, everybody is welcome.

Two of our strongest players – Jim Stevenson, and Carsten Pedersen – will be taking a session each. Jim will be focusing on “Practical Thinking Skills” (25th June), using illustrations from classic Bobby Fischer games. Meanwhile, Carsten will be providing his expert analysis on some games submitted by members (23rd July) – you’re invited to submit 3 or 4 games each, at least one win and one loss, and Carsten will take us through some of the more instructive ones.

(For those not in the know, our Jim is also an avid user of Twitter, and is well worth a follow: @Jimovskytwenty3 – some fabulous chess analysis & musings on life!)

And another ECF-accredited coach, Tony Niccoli, will be taking a session on 20th August. Details TBC at the moment, but those who came to Tony’s session earlier in the season will recall what a well-run and instructive evening that was.

As well as the training, Carsten will be providing us with a fascinating lecture on the History of Chess, for general interest on 13th August.

After the amazing success of similar events last Summer, our Tournament wizard Adam, will be organizing three more events this year:

Arguably the highlight of Summer 2017 – this year’s Kensington pub crawl will incorporate even more pubs, with plenty of chess along the way. Save the date – 6th August!

The powers that be have selfishly littered a few Monday nights with big football games and bank holidays. No problem! Come along to The Albion anyway and there’s sure to be plenty of like-minded folks around to play some chess.

And don’t forget – as well as all this, there are also 6 Tuesday evenings of Summer League Chess down at Battersea Chess Club (5 mins from Clapham Junction). We are entering even more teams this year, so there’ll be loads of competitive chess to play!

Full details of all events below, and on our Club Calendar: 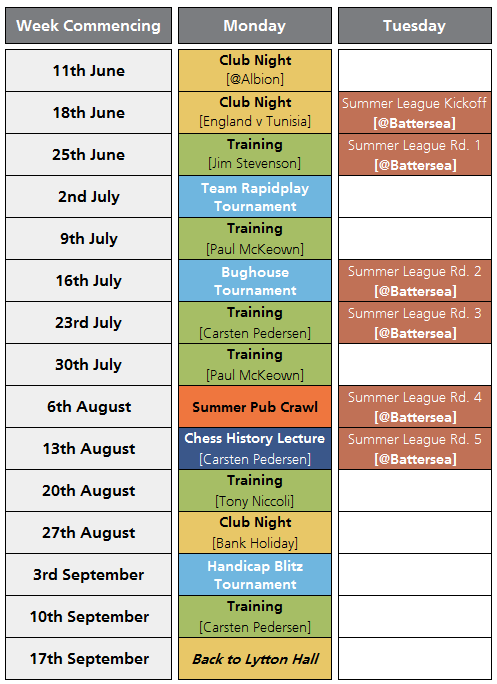 One thought on “The 2018 Summer Programme”