04.04.17 – The might of Hammer and friends took on the challenge of GM Chris Ward this past Tuesday in the hallowed halls of Valhalla… aka Lytton Hall!

Twenty souls turned out to take on the former British Champion in a battle to the death. Maybe the quality on our part was patchy – but we had the numbers, the advantage of home turf and the hunger to improve on our encounter with Chris last year. Plus we had secret plans and clever tricks – thank you Roald Dahl – to throw him off his game… more of that later!

Before relaying the events of last night, I have to thank Chris on behalf of the club for schlepping over to West London to take us all on.

Chris is a great GM for a simultaneous – he is funny, empathetic and easy going. I totally recommend that chess clubs book him for an evening and am delighted to provide his contact details if you are interested. Please contact us at info@hammerchess.co.uk

Let’s have a look at the old scoreboard before examining the high points of the evening. Chris won 17 games, drew 2 and lost 1. However, the devil is in the detail.

Already a moral victory for our side – last year we lost 14 and won 1. Okay, I am stretching the point but whatever!

The hero of the evening was Marios – playing his first ever Benko Gambit – who recovered from a lost position to triumph with excellent endgame technique to force the win. Marios admitted that Carsten, our victor from last year, had given him excellent advice the previous night in the pub. Always a good source of inspiration.

His prize? A signed copy of the Queen’s Gambit book…. written by Chris himself.

Other highlights from the evening were our WOSF of a Chairman, who rescued a lost position to force a draw – as everybody knows Bajrush has the unique talent of posing questions in any position. Chris, possibly inevitably (it was well past 11pm) missed a resource and Bajrush pounced. The draw was agreed.

The funniest moment of the evening involved two of our Irish members, John and Orial, who contrived – despite being 3 boards apart – to play the same variation. This was totally unintentional and Chris only realized by about move fifteen he was playing the same game twice. To mark this unusual event, this variation will be forever dubbed the “Munster Twin Variation”. Sadly, unlike the rugby team, it was not victorious in either case.

The unluckiest player of the evening was David, who played brilliantly to achieve equality and then threw in a tactical show of Qc5! This wrecked Chris’s pawn structure and gave the advantage of Bishop over Knight. The added bonus being he controlled the b-file with his Rooks. Confidence was high on the Hammer side.

Unfortunately, Grandmasters do not give up easily and through a combination of clever manoeuvring and sheer willpower, Chris got back on terms and then started to squeeze. David cracked and Chris had secured another win. A great game from David and so unlucky.

Our guest from Battersea, Tim, also played an excellent game and achieved a material advantage of Rook against minor piece and a pawn. Unfortunately, Chris simply rearranged his pieces and continued with his King side attack. Another great struggle ended in another win for Chris.

I must also commend Pavel, playing an extreme version of a Schliemann he had chaos on the board after about 7 moves. Chris sank into thought and in the end accepted a piece sacrifice to win the King’s Rook. The move Pavel missed was Be6 when the situation would have been as clear as mud. This chance came and went and Chris smoothly converted.

Adam played an Albin counter gambit and again Chris sank into thought. The position was double-edged until Adam played Na5 with ideas of penetrating on b3. However, Chris negotiated all the tactics, a desperado piece sacrifice and then secured the win.

To the best of the rest, our three participants from SW Junior Chess Club acquitted themselves very well. Their coach Tony Noccoli would have been proud of them. Chris, with great grace, turned down draw offers and clocked up another three wins.

The rest of the Hammer crew went down in a blaze of glory – well, to be honest Chris was not in any danger and simply used his superior skill and technique to win comfortably.

As for me, I secured a draw at 11.20pm. My result was down to the combination of several factors: the sacrifice of other players, the time and the fact I had supplied Chris with beer, crisps and sausage rolls (the secret plans and clever tricks angle!). I think he realized he was morally obliged not to crush me like last year! 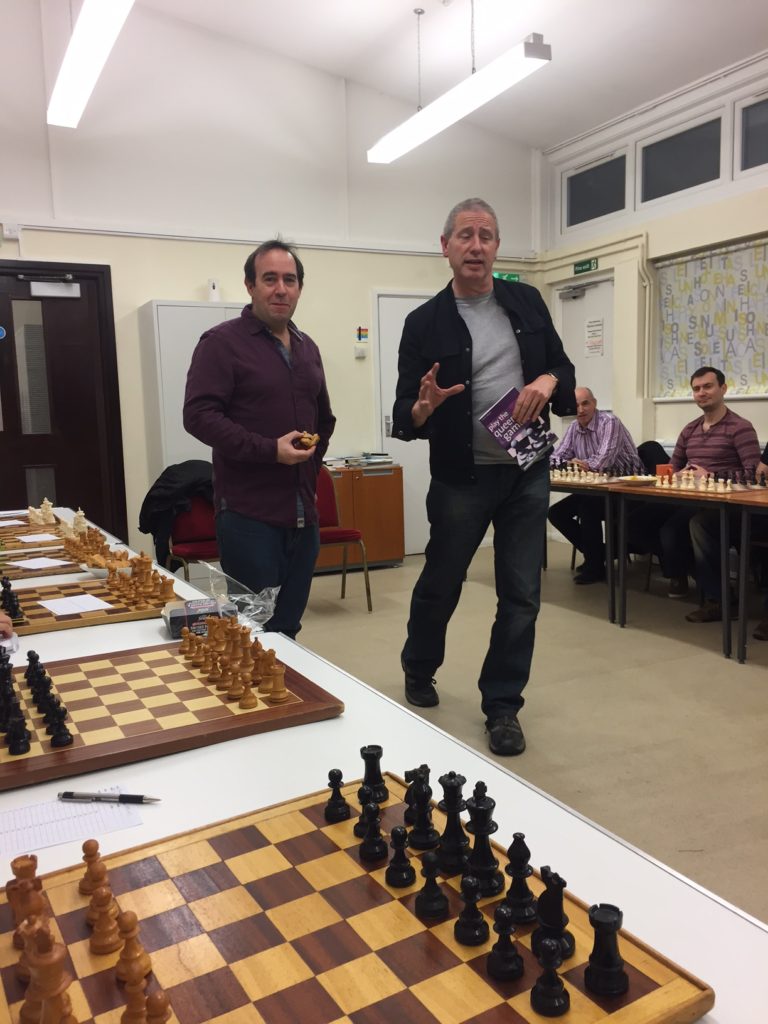 Our thanks to Chris for a top, top night!

This takes my simultaneous career results against Chris to two draws and a painful loss. The three games span twenty-five years and a 33% return is not bad for a keen wood pusher!!!

Finally, I must also mention our Secretary Mike, who setup the boards and tables for the event. We are lucky to have him.

One thought on “The Anatomy of a GM Ward Simultaneous”