As the start of our much anticipated debut season in London League Division 1 drew ever near, I was faced with the typical captain’s conundrum. How could I strengthen the team in order to give us that essential bit of extra clout at the top without alienating my team mates, or worse still, infringing Hammer’s noble Corinthian ethos on recruitment?

You know how you wait for an hour, and then three buses turn up at the same time…so no sooner had I recruited IM Tom Rendle, thanks to Chris’s extensive contacts and the recent successful Celtic Tigers / Grantham Sharks collaboration in the Battersea Summer League, than Tom suggested his friend IM Peter Roberson would also be interested in joining us.

Just as we were catching our breath on that double coup, IM Mark Kvetny wandered into the Albion one summer evening, played a few games of blitz and got chatting, and promptly decided we were the club for him, rather than Battersea. Well they say IMs combine excellent judgement with uncanny intuition…

Add to that our recent recruits Fedja and Christof and we had five great additions to our already excellent squad. 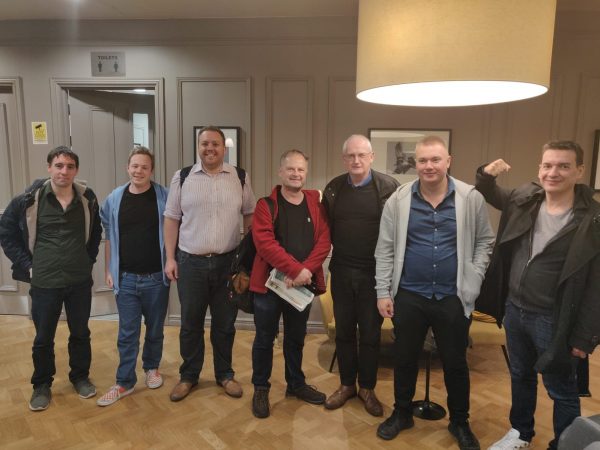 A tough start against one of the stronger established sides. This year, to keep my reports within reasonable bounds, I will not describe each individual game in detail, but refer you to the attached match cards.

Frustratingly, I had to miss the match due to illness, and I also had to pull in three substitutes at fairly short notice. It mattered not. Adam stepped in, and apart from performing captaincy duties with aplomb, also pulled off an important late swindle.

Solid wins from Peter, Thomas, Marius, Nadhmi and Adam, along with draws for Tom, Mark and Sylvain gave us a surprisingly comfortable victory. A very pleasing start. 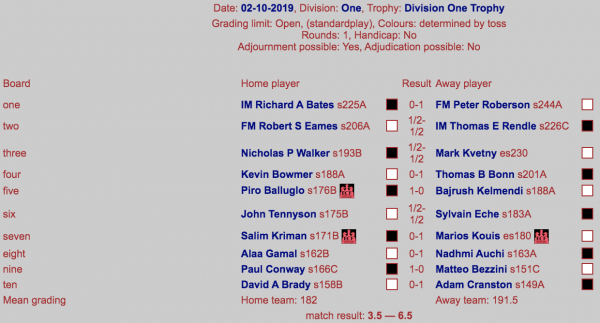 After our opening success we had some fun on Twitter at Battersea’s expense, gently “bragging” about being top of the League.

The greatest club in London.
=1st in London’s top league after an undefeated run this season so far.

So could we prove our opening result was not just a fluke? Up against another heavyweight in Streatham, we unleashed what might be the strongest team we have ever fielded: Three international masters and an average grade of 205.

Fine wins for Tom, Mark (see later for details from both games), Bajrush and Sylvain, along with draws by Thomas, Carsten, Fedja and myself saw us clinch another great result. Perhaps even Battersea and the mighty Wood Green were now starting to take notice of the newbie upstarts? 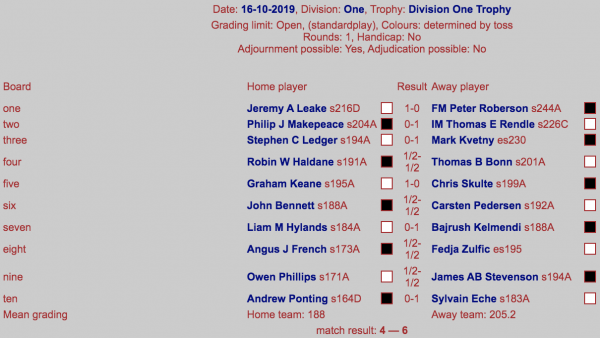 Was this a stylish contemporary reinterpretation of the legendary 1960 European Cup Final: Real Madrid v Eintracht Frankfurt? As our three musketeers did the heavy lifting just like Puskas, Di Stefano and Gento, the way was left clear for us to demolish the opposition on the bottom four boards.

Wins for Mark, Carsten, Fedja, Sylvain, Marios and myself gave us a hat-trick of wins. Alas, just as we were building up some momentum, this concluded our fixtures until we resume vs. Athenaeum in the new year. 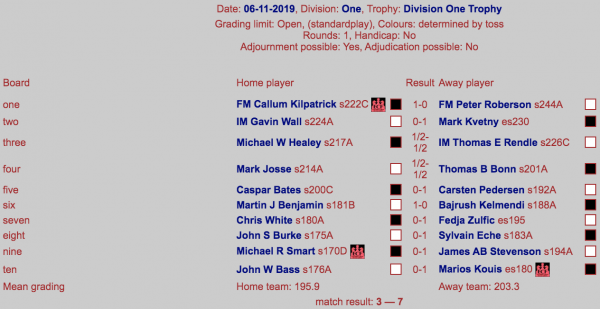 It is worth noting that these three wins came against very well established, solid first division clubs. They finished third, fourth and fifth respectively last season. And in all honesty we were not troubled by any of them. It seems our new recruits added to our regular stalwarts give us considerable strength in depth.

So we stood proudly at the top of Division One well into November, though we have now been overtaken by clubs who have played more matches pre-Christmas. The question is, what can we achieve this season? Clearly some Herculean battles lie ahead, and we are not yet ready to challenge Wood Green, but certainly the battle to be “Best of the Rest” should prove quite tasty provided we don’t fall victim to injuries, suspensions and dodgy VAR decisions!

Thanks to everyone for their support and heroic Spartan performances, and to Carsten for selecting a range of interesting pubs for our post match debriefs. Now, let’s see if you can find the best continuations in these fine games by Mark, Carsten and Tom.

“A couple of moves earlier I had ruined a winning position, and now it’s basically an easy draw for white.” 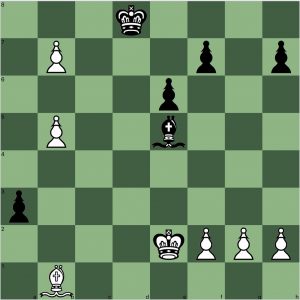 Mark, perhaps recalling the notorious 1st Game between Spassky and Fischer, boldly followed Bobby in capturing on h2. In that game Boris won a tricky ending after g3, after trapping the bishop for two pawns. The question is, should white answer 1… Bxh2 with 2. g3 here? What should the result now be? Provide some analysis. Does White have a better reply?

“I have just played Rc1. what happens if black tries to swap of a set of rooks with 1… Nb5? Sadly he saw it and played 1… Rg8 instead.” 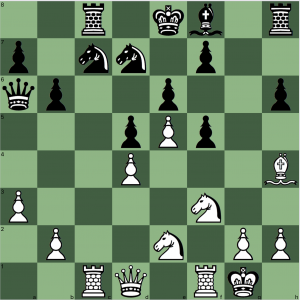 Tom has kindly annotated his win vs Phil Makepeace of Streatham & Brixton – a fine example of attacking chess at its best.