No Bruce Springsteen this week, but the Glory Days are very much here as we travel headlong towards The Promised Land. Read on!

On Monday Hammer’s 2nd team were back at Lytton Hall to face Hendon 5 – a junior team often known as Hendon Barnet Knights. On paper we out-graded them by a whopping 35 grading points on average, but as with all juniors they were expected to punch above their weight.

It didn’t go well on the top boards. Sheikh and Matteo, often first team call-ups, were brought in to bolster the lineup. They both blundered pieces early on and resigned, leaving us 2-0 down.

Regulars John and Brian were on boards 3 and 4. John can always be relied upon to dispatch weaker players, and as expected clocked up a win fairly quickly. Brian took a little longer, but ultimately had too much for his young opponent. He describes his game:

My opponent overlooked a tactical trap on move 8, losing his knight for two pawns. But he made good use of his two bishops to support his menacing d-pawn advance. To eliminate that pawn and complete my cramped development I had to sac my two q-side pawns.

Having swapped queens and a pair of rooks, I advanced my king to support my pieces through a series of tricky late-middle-game exchanges and win back a pawn, reaching the ending with knight & three pawns v opponent’s five pawns. Dealing with his remote pawn pair, in time trouble I allowed his king entry to gobble up two of my pawns, but retreated the knight just in time to save the remaining pawn for the win.”

Board 5 saw Simon employ a version of the London System recommended by his namesake, Ginger GM Simon Williams. Known as the “Black Half-Asleep Variation”, Simon planted his pawns on d4 and e4 with a knight on c3, against a king-side fianchetto. He soon eliminated black’s menacing dark-square bishop and seized a strong positional advantage. Simon couldn’t find a clear route to victory, however, and his opponent fought back well. Pieces got exchanged and the game boiled down to a draw.

By his own admission, Dipender played a very disappointing game. He lost a piece early on and never really got back into it. It was as if he had other things on his mind – possibly his wedding this weekend! A big congratulations – we wish him well on his honeymoon and hope to see him back at the chessboard stronger than ever!

Ken got extremely lucky on board seven. He offered a draw in a losing position with far less time on his clock. His opponent, possibly considering the grade difference rather than the position, kindly accepted, leaving us 3-4 down with one to play.

It was down to Ben, making his debut for the club, to come up with the goods on board 8. He did so in emphatic style, playing a very good game to wipe his opponent completely off the board.

So for the second match in a row we ended with a slightly disappointing draw. 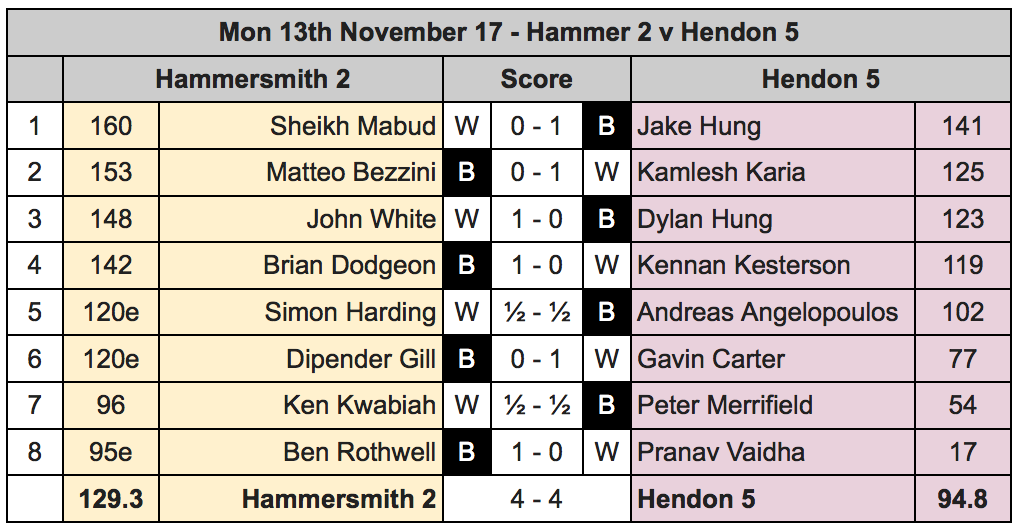 We remain top of the table, but this has to be qualified by the fact we’ve played two games more than our closest rivals, and we  have the toughest fixtures still to come.

Ken drops level with John as MVP (I’m not giving the accolade to anyone having played just one game). Sheikh, Matteo and Ben bring the number of members to have played this season up to 19 at the half way point, closing in on last season’s total of 28. 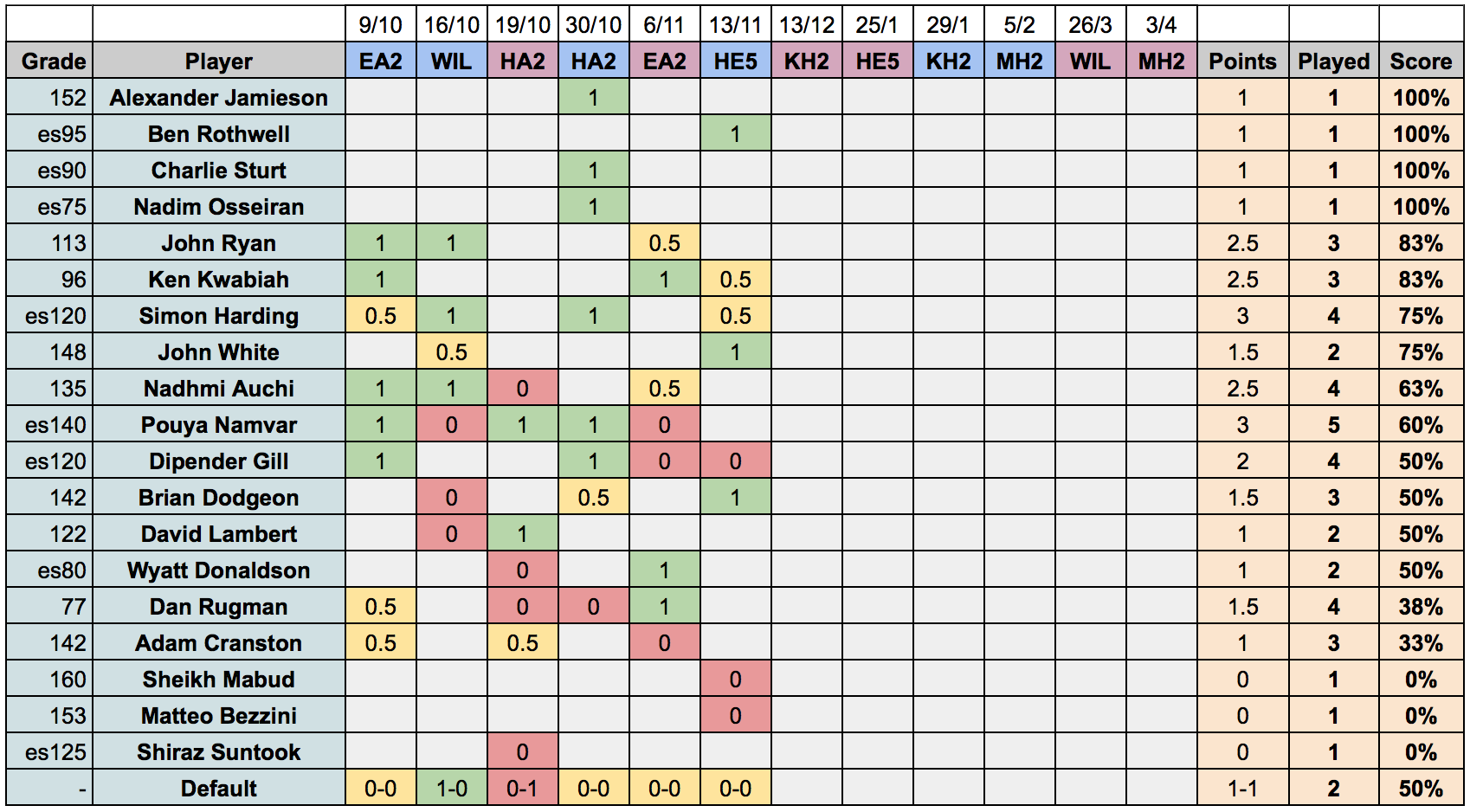 Next up is Kings Head 2 away on 13th December.

On the same evening, our first team also scored a 4-4 against Hendon. Full report to follow!

Don’t forget the second of our two training nights next week – details as follows:

Well now you can find out! Our good friends at Battersea Chess Club will be hosting IM John Bartholomew on 29th November for an evening of chess!

It all kicks off at 5pm at their Battersea Labour Club home, full details are available on Battersea’s Website. 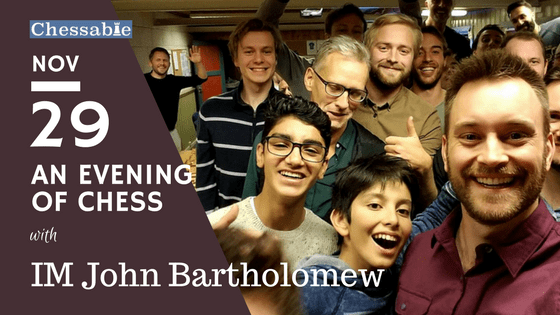 It’s FREE and you don’t even need to be a Battersea member!

The learned minds at Hammer Chess have decided to  branch out beyond the 64 squares of the chess board and take part in a pub quiz later this month!  We reckon there’s enough general knowledge there to give anyone a run for the their money (a test run last week resulted in a respectable 2nd placed finish – firm foundations!), so we’re going to have a crack at one of the local pubs in Hammersmith.

We’ll be hitting up the quiz at The Crabtree pub on Tuesday 28th November. If you’d like to take part please drop John an email: john.white49@ntlworld.com

A pair of important reminders:

That’s all for now – plenty of games this week and next, more updates soon!