Hammer kicked off the awareness of Women’s International Day a day early with a tremendous lecture from IM Harriet Hunt. Her theme very appropriately was the history of women in Chess.

Harriet is a 5 times British Women’s Chess Champion who has represented England all over the world. As she remarked her chess career took her to countries and cities she would probably never have visited. She is humble and very aware of her good fortune in being born into family that allowed her and her brother Adam to pursue their love of chess. All in all, just a fantastic woman and human being.

She presented to a packed Anvil, sadly very testosterone dominated, but one that was attentive and very appreciative. Before, I report on the night I must put on the record what a tremendous and caring lecturer/tutor Harriet is. Her style is probably partly due to her chosen career, she is a highly qualified academic, but I think it is overwhelmingly about the person she is. She made everybody feel part of the lecture, she listened, she shared, and she gave a superb talk. It was Springsteen in length but never lost its audience.  What was different and very refreshing is she opened the analysis to the whole room at various critical moments. She did not dismiss suggestions but analysed them, with her audience, on the demo board. We were truly blessed and better chess-educated for it. 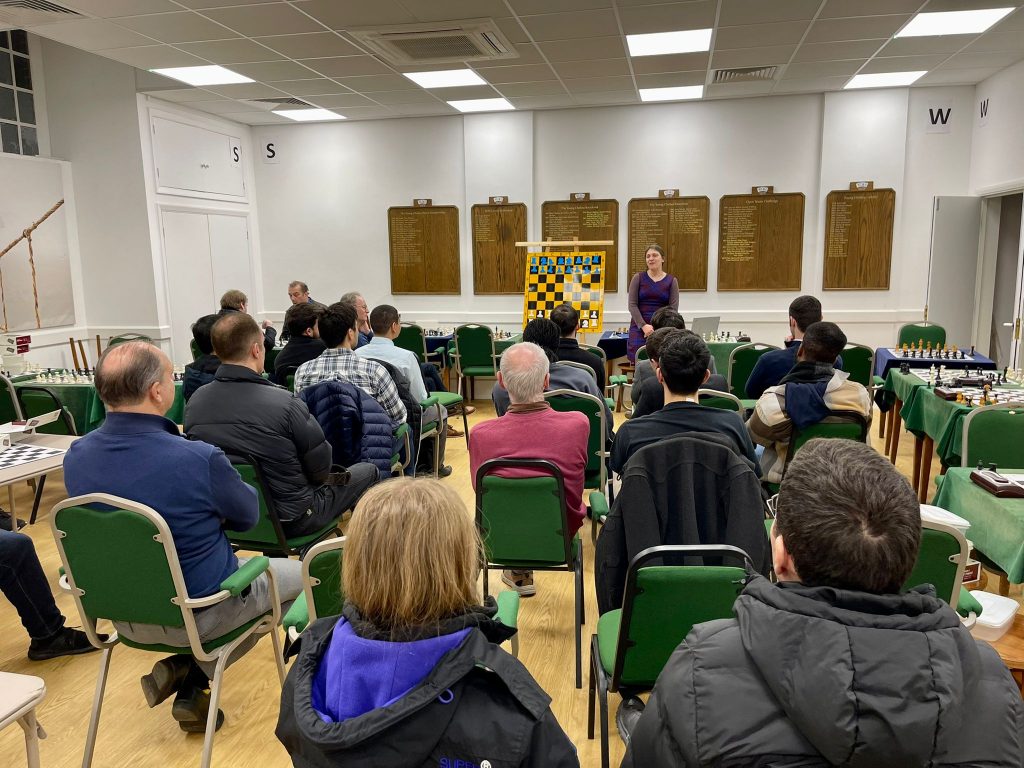 There are many women in the history of chess who have made their mark. For the basis of the lecture Harriet concentrated on four women. They were

Vera Menchik had an amazing career – she won many notable wins against strong men players – Sultan Khan and George Thomas – however, the game Harriet chose was against Max Euwe. A familiar name to many Hammers, not only a men’s World Chess Champion and FIDE President, but some of us were lucky to visit the Max Euwe centre, in Amsterdam, when we took on Du Pion chess club in match challenge.

This is the game

Played in 1931 when Euwe was approaching the height of his powers, this was a dominant performance by Menchik. A very instructive game. Harriet demonstrated numerous variations and took time to work through the suggestions of the Hammers. A great start.

Next up was Nona Gaprindashvili. The game selected by Harriet was her immortal game against IM Rudolf Servaty. This was an amazing game and showed the dominant characteristics of her play – e4, direct play and actively fighting for the initiative. This was an important theoretical game at the time.

Harriet again went beyond the end of the game analysing that the game was indeed lost. To be honest I am not sure I have the courage to play this sort of chess!

Nona is a fascinating player – obviously back in the news over her fight with Netflix and the reference to her on the “Queens Gambit”. However, I also urge you to check out her game against a 14-year-old Judit Polgar – another amazing game of chess.

Harriet then moved onto Nona’s successor – her fellow Georgian Maia Chiburdandze – and their first serious encounter over the board. Maia was 12 years old at the time and the maturity of her play is simply outstanding. Harriet pointed out the rerouting of the black knight that Maia initiated – this was outstanding chess. Here is the game.

The final game was an outstanding one from Judit Polgar – her opponent was Jan Timman. Once ranked number three in the world and a finalist twice in the Challenger match for the World Chess Championship. This game was a tour de force and very exciting and a fitting finale to the lecture. I urge you to play through it.

Harriet, then spent a long-time answering questions such as…

She gave very thoughtful and insightful answers and did not duck any question.

Interspersed with these answers were great anecdotes especially the one when she was playing the final of the Oxford County Championship. Her opponent was her brother Adam. The only time and place they could play was a Saturday afternoon at home. The reason being this was the era of adjournments, multiple games – time was very precious,

In the middle of the game their younger brother came in and reported the latest score from the Liverpool- Manchester United derby match – the score so threw Adam he blundered on his next move and Harriet won the game and became Oxfordshire Champion. Just priceless.

She then played some blitz games against Tomas and Bajrush before departing into the night.

What an amazing evening.

On behalf of Hammersmith Chess Club, we thank you Harriet for a great evening. You are welcome anytime at the Anvil. 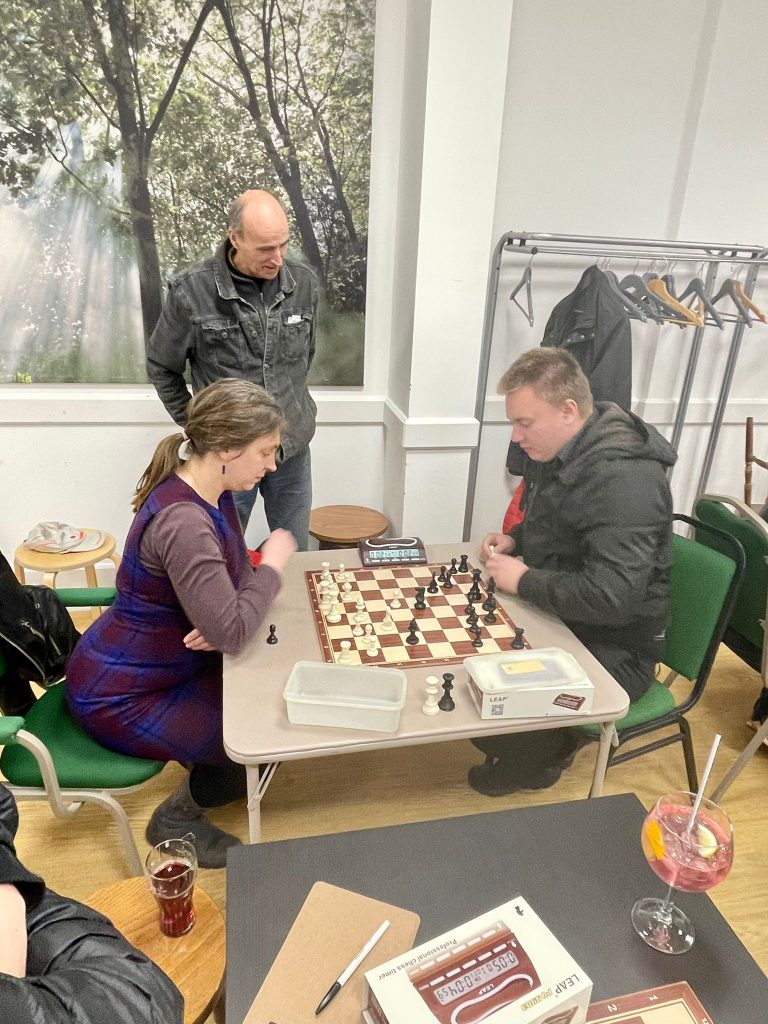