Is there anything Hammersmith Can’t do?!?

Hammersmith has long been a bedrock of fame, be it Hammersmith Bridge that was first designed by William Tierney Clark, opening in 1827 as the first suspension bridge crossing the River Thames, or The Dove (pub), which boasts the Guinness Book of Records as the smallest public bar in the United Kingdom, or even the famous (infamous) movie star Hugh Grant, who was born in Hammersmith.

Now we can add a new accolade to the list, where a number of Hammer’s master-level players (IM Peter Roberson, IM Thomas Rendle & IM Mark Kvetny) played for the national league squad TigerSharks to win Division 1 of the 4NCL Online League, which consists of many professional and semi-professional chess players.

NB: TigerSharks are a combination of two division 1 4NCL teams, the Celtic Tigers (which many Hammers play for, and is managed by Hammer’s own Chris Skulte), and the Grantham Sharks. In the 4NCL Online they are managed by Ryszard Maciol (another Hammer). 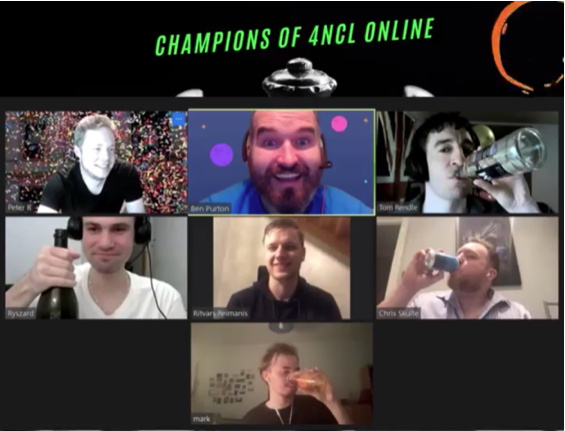 The top division of the 4 Nations Chess League Online (online due to Covid), is made up of teams of 4, who are split into 4 groups of 8, where the top ranked team from each group goes through to the semi-finals.

TigerSharks finished top of their group with 6 wins, and 1 draw, and the second highest game points of 22 (an average game sore of 3.1-0.9 per match!). Only Chessable’s White Rose managed higher, with 23 game points over the 7 rounds.

The other teams progressing to the finals were:

It was all systems go for the semifinal, luckily for us, we faced the weakest of the 4 teams (though there is no easy opponent at this level), and form holding true we were able to win comfortably 3-1.

The other game saw the highest rank team, Chessable’s White Rose, led by England #3 and current Online European Blitz Champion Gawain Jones, draw the match with Guildford. IN the event of a draw, whoever wins the highest board wins, therefore an amazing upset win for Guildford. 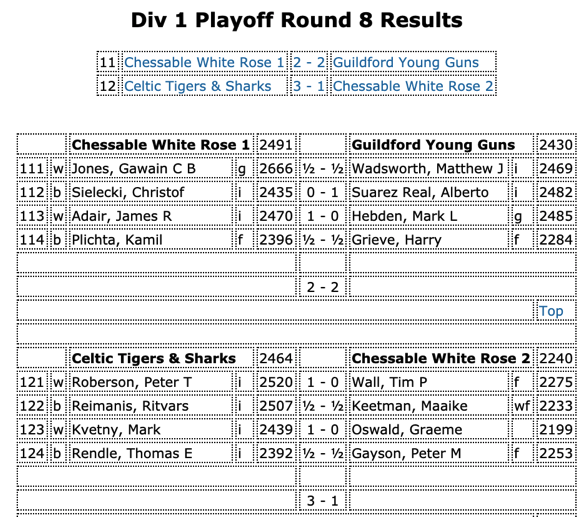 The moment of the season, having been knocked out of the previous knockout semi-finals by 2-2 draws (losing on board count), the team has one goal on our mind for the first final. Games have been commented on below in the order which they finished.

Board 3 (White): In a tight encounter against Grandmaster Mark Hebden, after a slight misplay by Kvetny on move 25, Hebden started to press, Mark gave a final attack to try and save the game, but alas it wasn’t enough.

Board 1 (White): In the next match to finish, Peter slowly built up an advantage, though some good defence and counter play by Wadsworth brought the game back into balance. Expertly played by both at this point, pieces were slowly traded down into a draw.

To win the match, we now had to win on board 2, otherwise we would lose on game points, or tiebreak – unfortunately at the time our opponents had a +4 advantage on that board.

Board 2 (Black): All eyes were on this game, it was an extremely tactical encounter between two strong international masters, Reimanis and Suarez. A key moment being White’s 26th move, which brought the game back to even. Reimanis then continued to outplay his opponent, got the advantage, and sealed the win with beautiful style.

To win the match, we only had to draw the last game.

Board 4 (Black): The final game of the match was international master Rendle vs Grieve. It was an extremely close encounter, with a lot of pressure built up on both sides. Navigating the difficulties, Rendle was able to steer the game towards a peaceful ending.

The final match table is below, we sit down with a beer to digest the season, have a sleep, dust off our pieces, and get ready to defend our title. Hammer’s influence grows larger yet again! 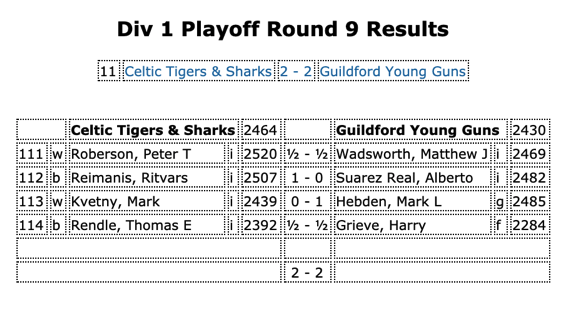