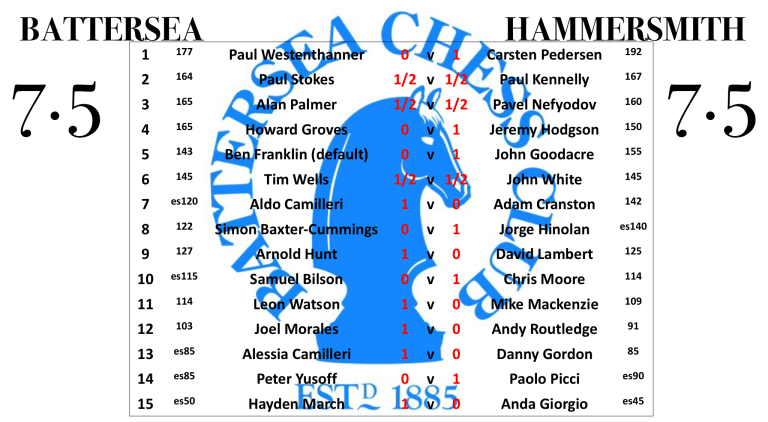 The bi-annual grading update from the ECF has taken place, and new grades for all registered players can be found here:

Topping the charts for Hammersmith are the following five players, all of whom added at least 9 points to their respective grades:

Fantastic news & well done to all – keep up the great work!

And don’t forget the following two events happenings this week:

In one of the most highly-anticipated games of chess since June, the Titans of Hammersmith Chess Club took on the relative Royalty of London chess, Battersea Chess Club in the first leg of a double header modestly dubbed “El Chessico” (a pop culture reference to an obscure game of football somewhere in Spain) last night. Your correspondent is proud to report that Hammersmith achieved victory in an-evenly matched game, by 7 boards to 5.

This being the home leg we were delighted to welcome Battersea to our Summer venue, the Albion Pub on Hammersmith Road.

There were some notable performances from both sides. Worth calling out are the following:

Paul Westenhanner achieving a creditable draw on top board against Carsten; John Wooley drawing on board 5 against a much stronger opponent; Jorge Hinolan with a terrific win on his Hammersmith debut; and Danny Gordon also securing victory on his debut for the club. Fantastic effort chaps, and thanks to everyone who turned out.

Attention now turns to the return leg next Tuesday 26th where, due to popular demand, we have agreed to widen the game to 14 boards!! It will be a fantastic sight watching 28 players engaged in battle across the board.

As Battersea are hosting we will have the added difficulty of going “saaf” of the river, however I’m confident we can dig deep and overcome this disadvantage! We go again!!

A reminder – Monday 25th sees us hosting WIM Sue Maroroa at the Albion for a simultaneous display. If you’ve not done so already, please get in touch to confirm your attendance. It’ll be a great opportunity to play against a top class opponent! 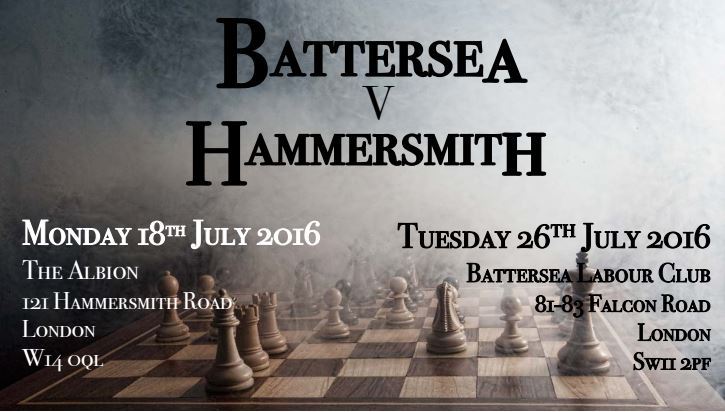 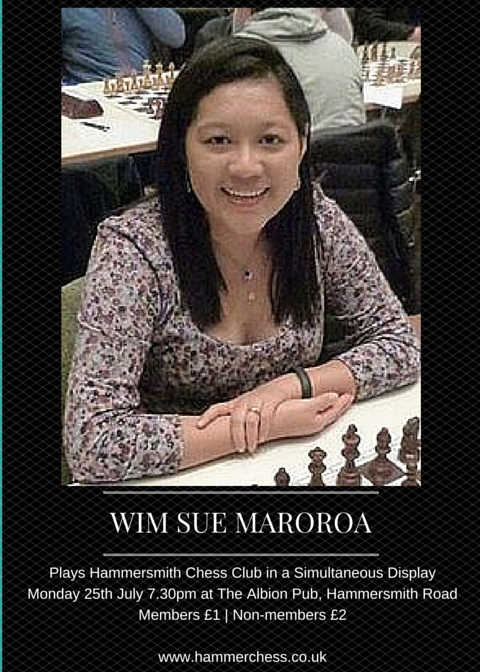 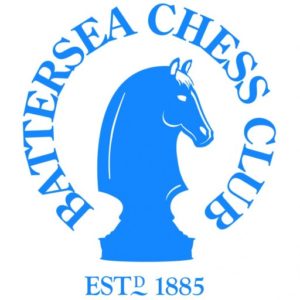 All – please note that due to other commitments we have had to change the date of our Simultaneous game against WIM Sue Maroroa.

The event will now take place on Monday July 25th. All other details remain the same – save the date!!

It has so far proven very popular, so please let us know if you would to play.

We’re also looking for players for our two upcoming games against Battersea Chess Club. Get in touch with us or your team Captain if you’d like to play in either event.

Save the dates!! We have agreed to hold a 12-board double-header against Battersea Chess Club in July, with one game at our Summer venue in The Albion on Monday 18th, followed by a game at Battersea’s home venue on Tuesday 26th. It’s a great opportunity to get a chess fix during the close season, and should be a competitive pair of games against London’s oldest chess club.

The games will be ECF graded and we’ll be playing London League (Quick Play) rules on all boards – so no adjournments. A great opportunity for all members, including those new to competitive chess. We have asked Battersea to put out an even spread of graded players so that we can have some relatively even match ups.

It’s an open invite and free to all members – if you’re interested in playing please leave a message below, drop us an email, or contact your team captain. Promises to be a great pair of evenings with some competitive chess which we’re really looking forward to!

It was with great sadness that we learned of the death of Hammersmith player Ken Hedger last week. Ken had been at Hammersmith for a number of years and was a regular at Club Nights and in London League games. Our club Secretary and friend of Ken’s, Mike Mackenzie, has written a short tribute:

Reflecting on his time at Hammersmith – he was unique, a snazzy dresser, he never once concerned himself with grades; he would play anyone, anywhere, on any board, and with his idiosyncratic style managed to fool even the best of players.

He would turn up armed with a completely new opening not found in any chess manual. It didn’t always work, but on occasions he would pull a rabbit from the hat.

He was a more than active chess player before he joined Hammersmith, captaining and serving on the Committees of other clubs. He was a familiar, well known face with all opposing teams.

I travelled many times with Ken and enjoyed his company immensely. His three loves were chess, cigarettes, and coffee.

He will be truly missed by all members old & new, by opponents, and by friends.

As Summer approaches and the Chess Leagues take a well-deserved break,  we are lining up some exciting events of competitive and fun chess to keep our collective fingers on the chess pulse!

The first Event we are pleased to confirm is a Simultaneous display against Women’s International Master Sue Maroroa.

Sue is a former Hammersmith Player, and with an ECF rating of 213 currently ranks in the top 10 female players in England. She is a former New Zealand Chess Champion, has played at several Olympiads, achieving the WIM title in 2009 and later achieving International Master norms in 2014. Definitely a force to be reckoned with!

The event will be held at the Albion on Monday 11th July, starting between 7.30 and 8pm. We have space for 20 boards on a first-come first-served basis – if you’d like to reserve a spot please get in touch or leave a message below.

We are also working on a few more events this Summer – a small taster below:

I think I can safely say it was the most important AGM since The Club was inaugurated back in 1962.

The scent of change was in the air and with great respect to our proud history, The Club took a large step into the 21st Century last night.

The adoption of a new constitution, the appointment of a new Committee and Team Captains, the meeting was presented with a concrete analysis of our financial position – with excellent cash flow projections and a sense that the club had a clear direction. This, coupled with the naming of our award winners and for the first time in our history the appointment of a different Captain for each individual team. The first time we have ditched multiple captaincy roles.

There was also a presentation to Anda for all her work in making the Wednesday nights at Hammersmith Library truly “Chess Night” – something we will and must replicate at the the other libraries in the Borough. The “Anda Method” is the way to go!

Our ever dependable and long-serving Secretary Mike Mackenzie was awarded “Personality of the Year” for all his work and commitment to The Club. Thank you Mike!

The meeting took 90 minutes to complete, with the distribution of reports to all members beforehand.

With the serious business over, a 10 minute handicapped blitz tournament followed with 19 players involved. This was frenetic blitz at its best and worst – but huge fun. Once again our Chairman the Kosovan Wizard Bajrush triumphed against your correspondent in a final where I blew a winning position – as usual!!

However it was only fair and right that the man who started the revolution and change in our club was the victor. 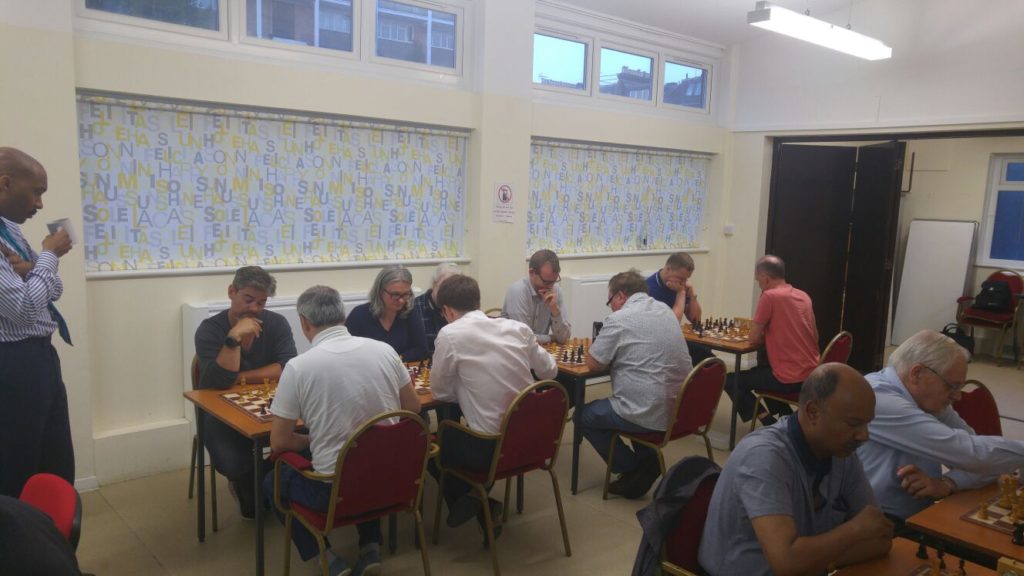 A great night was had by all and Bajrush treated the club to drinks, both soft and hard, with plenty of crisps and snacks.

Maybe that’s the reason he won the blitz….

See you all at the Albion Pub next Monday as we relocate for the Summer months. Stay tuned for details of our Summer events.

Our third and final look back at the archives (for the time being), is this truly devastating example of the King’s Gambit from Hammersmith’s own Sheikh Mabud in 2009.

Aggressive, dynamic chess at its finest. Take a look – here.