Hammer Firsts went again last week with local rivals Kings Head in the firing line. There are no easy matches in this League.

Another tough at the office.

The team featured three Hammer stalwarts. Chris Skulte on Board 1, Christof on Board 2 and Jonathan on Board 4. The newbie and making his debut in the competition was Krasen (Chris) Dimitrov on board 3.

Like last week before I go to the match report were you able to identify Week 3’s concealed chess figure…It was the unique and controversial figure of Robert J Fischer… another true genius of the chess board. In this week’s report another historical figure lays hidden. The clues are once again in bold and please enter your answers in the feedback option.

So to the match…

First, the result– our first loss with a 1.5-2.5 score line – this was such a close match with four amazing games to look at – I know I have said before but if the runes had fallen right, the play of your four Hammer heroes would have been rewarded with a match win. But Caissa can be cruel…

As usual we will go in board order – Board 1 for Hammer was the immense talent that is Chris Skulte – aka “Lord Hurricane” and in total win or die mode. This was a fascinating game where Chris missed a draw against a strong opponent in a really complex battle. He was also subjected to the John Sargent commentary treatment on the livestream. I think the Hurricane was not at his best but as usual never gave up. Here is the game.

Chris is a serious lover of German beer – both Adam and I can testify to that after the Stuttgart beer festival last year. I reckon a few were sunk by our man after this tough encounter.

Hammer 1-0 down but who ever said the French exchange is as dull as ditch water??

On Board 2 – Christof aka “Der Vater” played an amazing game with time playing a huge part in the outcome. How he held the position at the end was testament to his skill. I have never seen two more powerful white knights. Many a player would have cracked but Christof is made of Hammer steel through and through. Did he really take 27-year break plus from chess?

The game is just fascinating.

Hammer on the scoreboard but still trailing by a point.

Next up was Chris D, against an opponent who took me to the cleaners two years ago in a Middlesex OTB encounter, Conor has drawn and beaten titled players in a long, and distinguished chess career. How would he deal with the new boy?

Chris joined the club under two weeks ago and was anxious to play. After a few blitz games against Lord Clueless which he emerged a 2-1 winner – Lord Clueless decided Board 3 was the right level for him to start his online LL odyssey.

What followed was a brilliant tour de force from Chris and a thoroughly deserved win on his debut in just 27 moves. As a result of this performance I assign him the nom de guerre “The Bolt”.

This was great to watch with Bd5 a nice touch – enjoy.

The last match was going to determine the match point – over to Jonathan.

Maybe I am alone but I have noticed a much more aggressive edge to Jonathan’s chess in this tourney. He is much more in your face and let me nut ’em mode than I seem to remember from our OTB encounters (do you remember those?).

This game was all about striving for the initiative – he had a tough opponent in the form of Colin Mackenzie and neither player backed away from playing critical moves. Jonathan kept pouring oil on the fire and never backed off – this was total chess combat. Sadly, he was always one move away from getting the win his imaginative play deserved – but this game was testament to his fighting spirit and his new approach. What a game.

Hammer were beaten but did not go quietly into the night. This was a worthy fight and maybe on another night we could have sneaked it. 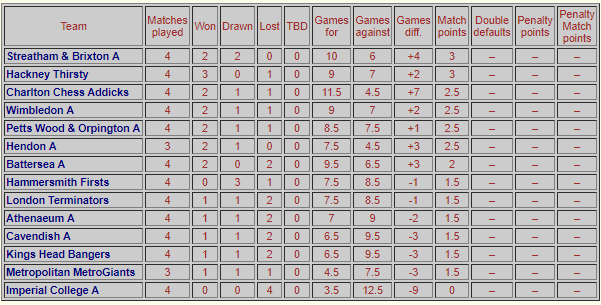 Still a lot to play for.

Clueless is a proud Captain and is looking forward to the next bloodthirsty encounter.