Before talking through my battle with “Ginger GM” Simon Williams, I will start by discussing my background in chess. I do this to outline how an ex-130 rated player (currently 106) might think as they work through a game in a highly uncomfortable position they have never seen before, against much higher-rated opposition.

Lots of my club peers probably go through the same kind of feeling during certain games of chess. I do this to point out the obvious: feeling uncomfortable at times is an unavoidable part of chess – the trick is to accept and embrace it!

I learned to play chess when I joined my school chess club at the age of 11, and my 14-year-old self made it to 130 level, from where I stagnated with no coaching and no plan. I continued to play actively through university and during my first years of work. However, work combined with some life events led me to all but give up chess at 30, for the best part of a decade.

Then, my childhood friends Aidan and Mark helped me back into chess. A plan was hatched to learn the same openings as they were, ditching my beloved e4 as white and Sicilian as black, for things I had never played before. The reinvention of my love of chess had begun. While I have hardly played in England, i have made recent annual trips to Bunratty with my friends to enjoy a break for socialising and chess.

I’ve now been a member of the mighty Hammer for about 18 months. I joined after a combined effort from John White and Mark (of Cork Chess Club) that got me involved in the Keith Arkell Simul at the tri-club meeting with our Dutch and Irish friends in London in Summer 2018. I hope to play many more matches and get back into over-the-board chess, and while I have had a few outings, work has conspired against me at various points.

Still, I am delighted to be involved with a great club that has a strong beating heart of committed players and great team spirit, and I hope to continue playing in future…. but for now we are in lockdown and with no over-the-board chess.

Since lockdown I have been continuing to play on Lichess, and my outdoors cycling has been swapped for cycling in the shed on my indoor training, where I have regularly combined exercise with watching YouTube chess videos, particularly when I find ones focused on openings I play.

On one such occasion I  stumbled upon some videos by Simon Williams of ‘Ginger GM’ notoriety, which I found instructive and entertaining. I had seen Simon play at Bunratty and knew he was famous for a love of pushing ‘Harry’ and ‘Gary’ whenever possible. I appreciate good attacking chess and like this style, so when the invitation to play Ginger GM in a simul came up, I felt I had to give it a go. I have played in about half a dozen simuls over the years, and lost all except one – a draw with Peter Wells while I was at university.

So, the scene is set…

So, already Simon demonstrates his love of Harry… this is not something I have ever faced before. Objectively speaking, 2.h4 must be an inferior move and black should be able to at least equalise. Practically speaking, it is entirely a different matter!

I know that when an opponent attacks on a wing, it is often good to counter in the centre, and so… 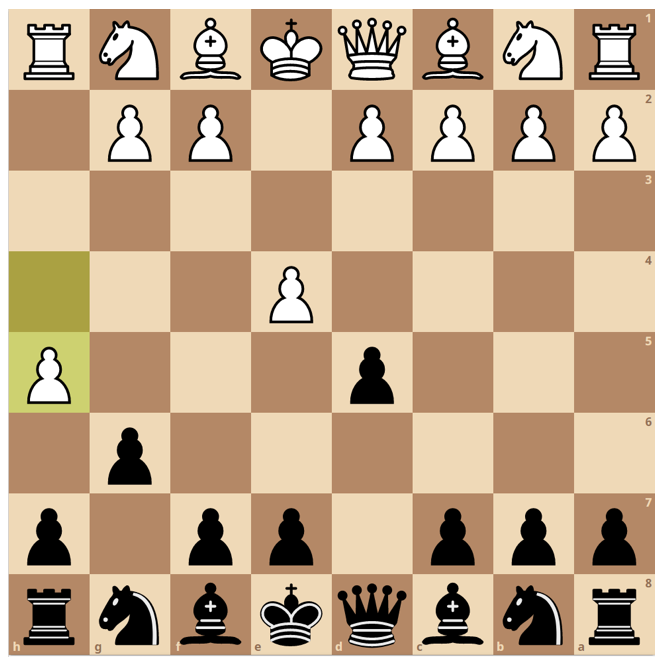 I felt 3…gxh5 was obviously bad. 3… Bg7 doesn’t feel quite right here either –   I felt I had to take up the offer of a central pawn and play for activity.

Taking the pawn would just help white achieve his aims. I have to continue to play actively. I am a pawn up but can see how easily white can attack if given  half a chance!

Again playing for activity above all else, development of a piece with tempo felt logical.

Simon may have made a slight mistake here as Ngxe2 seems more useful development.

Both Bg7 and Qd7 are also good here. I simply wanted to continue to develop with tempo where possible and felt piece swaps help me more.

I had committed to this with my 10th move. The position is sharp, but black is doing well. 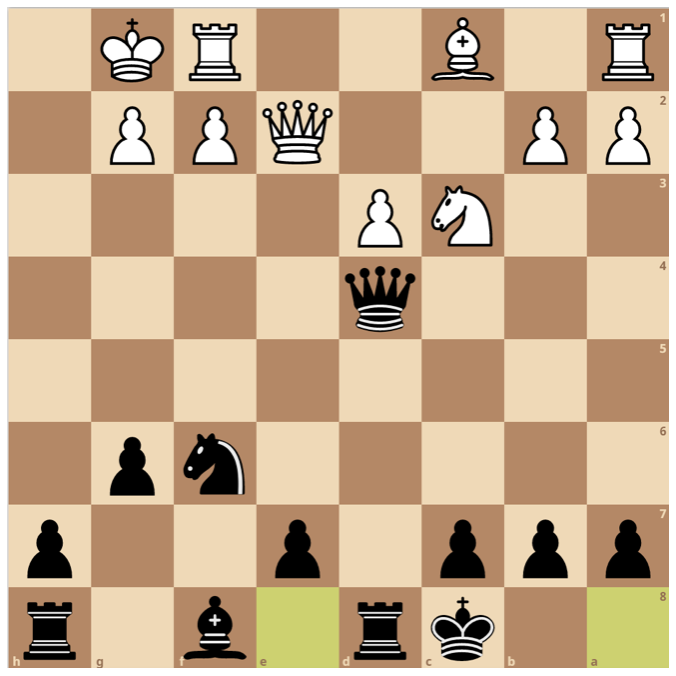 White’s 13th is not the computers best move, but Simon seeks to create complications and attack against a lower-rated opponent. 13… Qd5 may well have been my best option.

Black is better, but the position is very sharp.

17.Nxc7 was white’s chance to gain the advantage. I was working about this move once I had played Nd5.

I was looking at this and at 19…Bh6, and immediately wished I had played the latter: it develops with threats, connects the rooks, and is just a good move! …Qb6 mistakenly focuses on his threats, rather than generating my own. 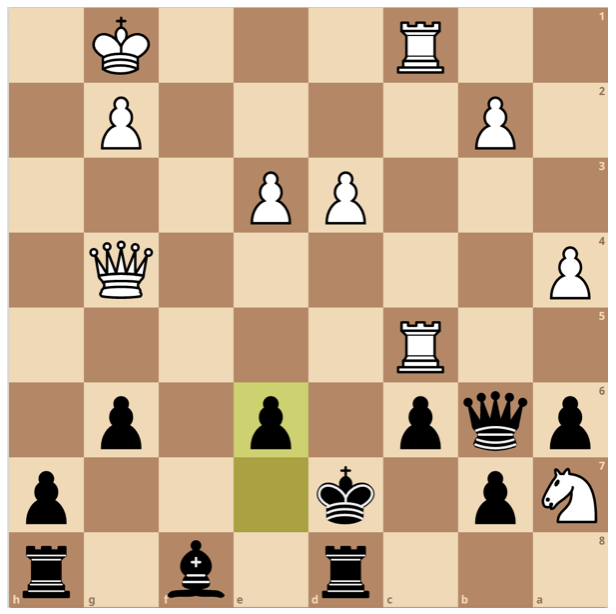 White would be better playing 21. Nxc6 bxc6 22. Rxc6 Qxc6 23. Rxc6 Kxc6 but black should still win if he can complete his development without dropping a piece. This mistake is understandable as white has been under immense pressure to try and find threats.

The above point, with hindsight, reveals much to me about mistakes in my thinking as a (hopefully) improving club player. My main learning from this game is that feeling uncomfortable in this open position is absolutely okay, but it meant I did not realise at the time quite how strong my position actually was and how much pressure white was under.

The position is assessed by our silicon friends as better for black almost entirely throughout this game. It is right to feel uncomfortable, but I needed to also recognise that my position was better, and work to dissipate white’s short-term threats, then take my opportunities as they emerge.

The fact it was a GM on the other side of the board perhaps clouded my judgement, led me to worrying too much and giving him too much respect in some of my move choices! I have nothing to lose and everything to gain in a game like this, and should play as such!

The point of …e6. Now white is in big trouble.

e8 felt like the right square, to stay away from as many checks as I can. 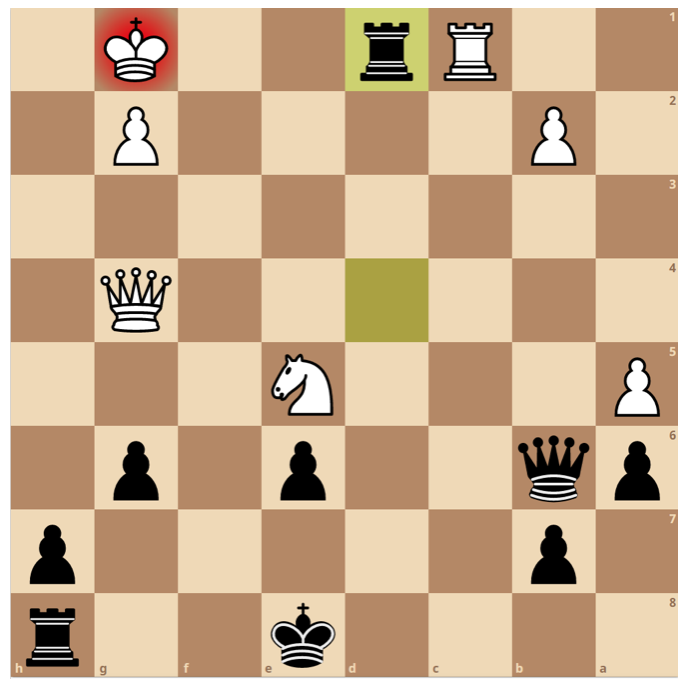 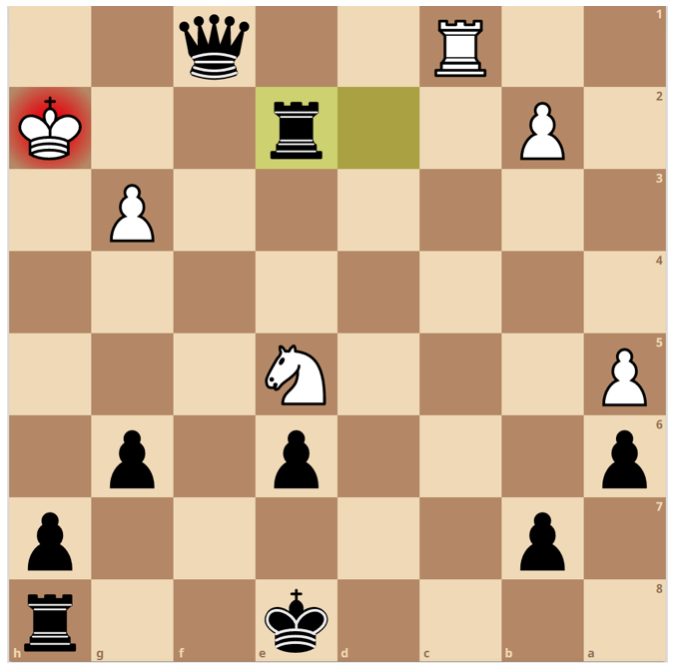 Looking back over the game I am pleased with my fighting spirit, and while I made mistakes, I was delighted to take the tactical opportunity I was presented with! My first every victory against a GM, 31 years after I learned how the pieces move. Here’s hoping I can do it in a real over the board match one day!

I think Simon ended up with 11/15, so well done to the other three Hammers who took points (I’d love to see those games too), and a big thanks to Simon for his fun approach to the simultaneous. I have promised him a beer when he visits our club when we are all able to meet face-to-face again!

Simon broadcast the simul on his Twitch channel – you can re-watch here (starts at 7 minutes in):

2 thoughts on “Jonnydangerous faces off against the Ginger GM”