Our Hedger team visited Greater London Chess Club at their home in Little Russel Street near Holborn earlier this month, for our second game in 2020.

As usual our friends at GLCC welcomed us very warmly and made us feel at home, maybe too much!

It all started on board 2, where Nick Rutherford (aka Triple X) did a very quick job. All I was able to see was Mr.X updating the match sheet with a nice “1” for Hammer. Like usual, when Triple X does not make any big mistakes, all remained very quiet and calm until you hear a big SIGH of relief indicating a victory!

Then board 1, where Dave Lambert (aka Toffee) delivered the point as well. In a typical Caro game, Toffee played white and managed to keep the advantage, preventing any counter attack until black had nothing left to do.

Next, board 4, where your man (aka Il Consiliatore) was facing a tough experienced player rated not less than 40 ECF points higher. I was able to avoid mistakes and take advantage during the middle game and early endgame. Then the clock started taking a toll on both sides, and I have to say that with my 28…Ng4? I sent the night away from the action and my position suffered a bit. My opponent started repeating moves and a draw was agreed down the line on move 34. Still, a good result for me and a very good game.

But the defining game of this match was on board 3. Clouds were gathering for our player Javier Silvarrey (aka Cyclone), as he found himself in a difficult situation down a Bishop early in the game. But any weather scientist will tell you how a cyclone sucks the pressure away from where it hits. Move by move, Cyclone aggressively and stubbornly disintegrated the opponents pressure, and finally the clock helped Black collapse, delivering the final win to the Hedger team. Unfortunately the most interesting part of this game was not written down as time was at a premium! But the crowd held their breath watching this cyclonic ending.

Final score 3.5-0.5 to Hammer, and four unbeaten boards against a strong and respectable opponent. 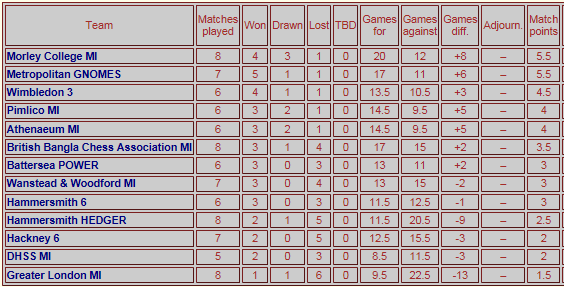 Let’s continue like this for the rest of the season!
Nadim.