Yes, with the regular chess season done and dusted, Hammer took to the road again. The 2019 road trip destination was the beautiful Polish town of Wroclaw, in Silesia. This is one of the highlights of the year, with Hammer enjoying the chess delights, local food and culture, and making new friends.

Home to great chess clubs, chess players, seriously good beer and close to the birthplace of our Ryszard – legendary Celtic Tiger and Hammer, and chief conspirator in helping Clueless get the show on the road.

Contact was made with Artur, the Don of Wroclaw Chess Club, who was given a choice he could not refuse – acceptance of the Hammer invasion. Hammer were making a territory grab and moving in on his manor. A bold statement of intent – this was a mission critical to the expansion of the Hammer Family and its ruthless Boss, Godfather Wily. The turf war was on.

The Hammer crew consisted of some hardened veterans and enthusiastic newbies – Godfather Wily had assembled an imposing bunch and issued new gangster codenames:

A formidable posse you will agree. On the Saturday we were joined by our friend and Celtic Tiger, WGM Klaudia Kulon.

The city of Wroclaw is simply stunning with an incredible range of architecture, amazing food and beer – indeed, all that any Hammer could want.

The Airbnb accommodation was superb and very central – Artur was a top guy and did his best in difficult circumstances.

He had one major problem – the HQ of the Wroclaw Mob was undergoing renovation and was way behind schedule. The fact is, there is a dearth of tradesmen in Poland at the moment – I wonder where they could all be? Despite his best and considerable efforts, the chess playing activities had to be curtailed from their original design.

In the end the Hammer crew played a blitz tourney on the Friday evening, overcoming amazing transport challenges, and then a rapid game on Saturday at the home of another chess club. This allowed more time for beer and enjoying the delights of the city. 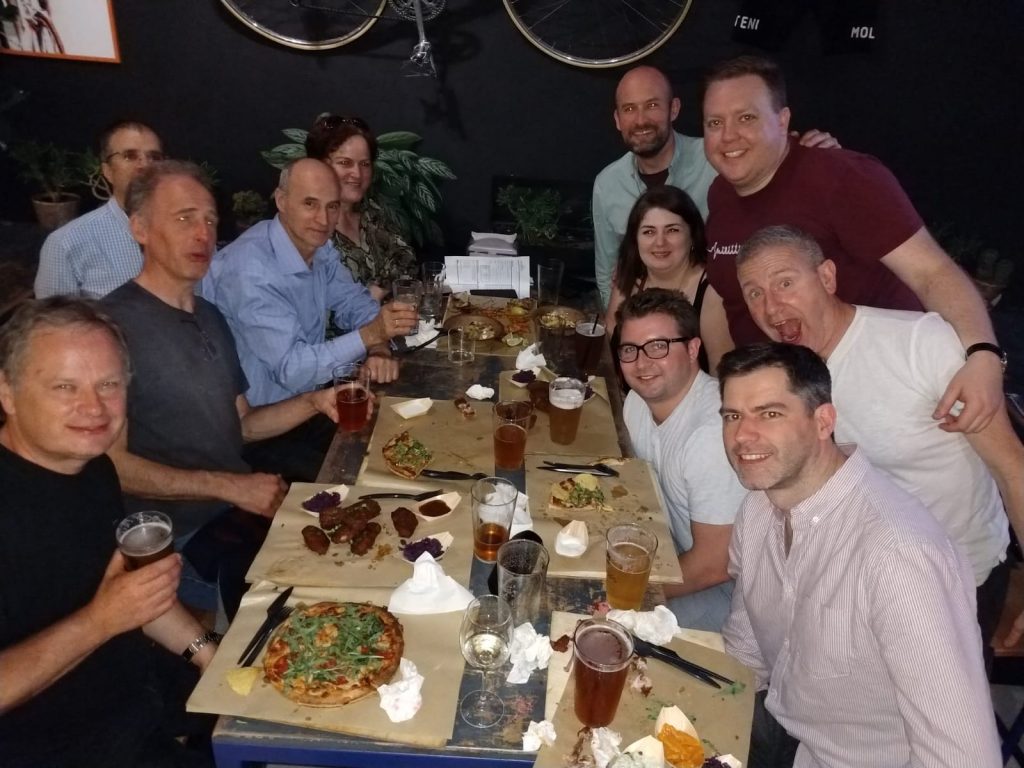 The Hammers assembled in the main square, called Market Square, for lunch on the Friday. Immediately noticeable was the price difference in beer from London – you definitely got 50% more for your pound – this obviously got the Hammerites in the right frame of mind. My particular favourite was 4Hops – a porter that tasted like treacle and at 14% was truly spectacular.

The group split up and explored the city before assembling to get an Uber down to the blitz tourney. This was in the suburbs and for some reason we could not get an Uber anywhere – fortunately in the end we made it, and joined a FIDE-rated blitz tourney.

Maybe it was the beer, but even our blitz king Corleone had issues and on the whole the Hammer filled up the bottom places – Scemo and Consigliere bringing up the rear. A tough chess baptism. I have to say the majority of our opponents were very talented juniors and played fearless chess. I think only Bonecrusher and Iceman retained any dignity on this occasion.

The Hammers quickly retreated to the city centre to drown their sorrows in more beer. The town itself was alive and one story that summed up the weekend was Psychokiller on his way home at 5am, was able to stop from breakfast. It really is a live-wire town.

The following day (Saturday) the Hammers indulged in various tourist activities – with Capo and Iceman checking out the 360 Panorama exhibition of the Battle of Raclawice – a critical battle in 1754 for Polish independence.

The rapid chess match took place in the evening at the home of the Hetman chess club – this again was FIDE rated and played in a superb club room with a huge chess library, trophies a-plenty, and excellent tables and sets.

On behalf of Hammer, Scemo presented a chess badge to each of our opponents and gave a book detailing the history of the Polish Centre in Hammersmith as peace offerings.

This was revenge time – unfortunately our opponents had other ideas – Bonecrusher and Psychokiller won, but for the rest of us it was a tale of woe. Sickle and Capo had fascinating games that could have gone either way – unfortunately not our way. Hammer had lost the turf war but had made new friends. Several consolation pints were consumed to ease the pain and cement the friendship.

The Sunday was devoted to a visit to the largest and most magnificent castle in Silesia – Ksiaz Castle – organised by Psychokiller – ancestral home of the Hochberg family, one of the wealthiest in Europe. An hours’ train ride away, the Hammer crew all recovered from the previous night of drowning sorrows, and enjoyed a fabulous time in stunning sunshine.

First stop was a restaurant to indulge in a serious piece of Polish Cuisine – Pierogi – unleavened dumplings with various fillings and either boiled or friend. Washed down with beer, these were wonderfully delicious and very filling.

This was then followed by a visit to the Botanical Gardens of Palmiarna, and then a walk to the Castle.

Psychokiller had organised a guided tour and we were very forcibly reminded of the huge British connection in the form of Princess Daisy (nee Cornwallis-West) an English socialite of the Edwardian period who married Hans Holberg and bared him three sons.

She really was the heart and soul of the Castle and led a fascinating life.

In the end a lot of the wealth was squandered and the Nazi’s took it over and started a huge excavation under the castle. What was planned is a matter of pure speculation as the architectural plans were destroyed – the prime theory centres on it being prepared for Hitler as his final headquarters – there were at least 6,000 labour camp workers forced to work on the project. A modern mystery.

The weekend was thus concluded with some Hammer staying on for an extended break. There was a minor crisis when Bonecrusher et al could not get into their apartment to rescue their luggage – but fortunately all was resolved.

On behalf of Hammer I want to thank Wroclaw and Artur for a superb weekend of great camaraderie and entertainment – I thoroughly recommend that you visit this beautiful city.