This match was Kingston’s return grudge match, and for  a while I thought we could win it. It was truly no-holds-barred contest, and both protagonists walked off the field wounded, but still alive, with thumbs up from noble Caissa, and standing spectators! No draws in sight, all wins or losses, very unusual . But then, chess can be strange like that. 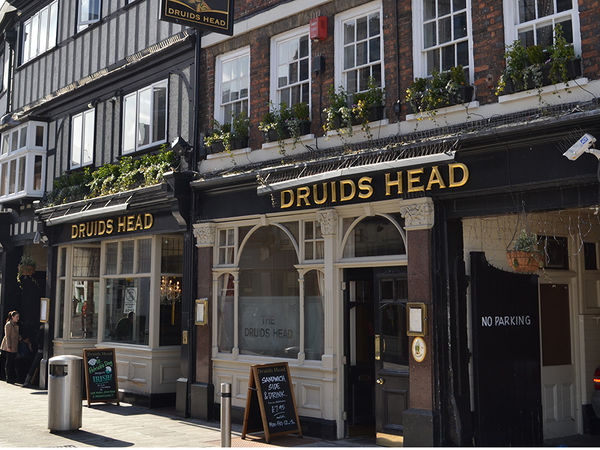 Fine wins were recorded by maestri C.Brixel, M.Bezzini, and J.Hoong. Bad luck to juniors Nadhmi Auchi (a promising attack with minor piece sacrifice and open g-file fizzled out) and Amaya MacDonald (fell to knight fork early on, but the Surrey captain of the U120 team was 3 pieces and finally a Queen up and avoided the stalemate trick). Our top boarder, P.Kennelly adjourned after a promising attack also fizzled out and two pawns down, he resigned overnight, very sporting.

Christof on board 2, with the black pieces commented:

“There was no exchange of an piece for the first 18 moves. Then the Kingston opponent grabbed a (poisoned) pawn and it was game over in 5 moves.” Brilliant!

Matteo on board 4 looked about equal with a rook each, and par on pawns. Something happened, because when I looked back 5 minutes later he had 2 passed linked pawns, and capitulation came. Word is he is at least 10 points better than his grade, maybe 160-170 territory.

Jonathan on board 5 with the white pieces said he opened with a Scotch Gambit, a double-edged opening but then it got locked up. However he waited patiently, redeploying his heavy pieces and bishops, and his attack was overwhelming, soon enough. Nice! 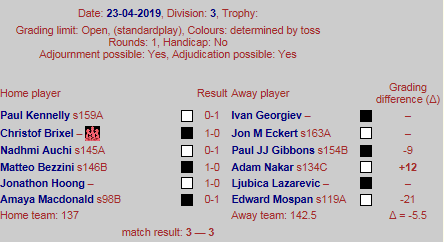 In our two match home and away summary between ourselves and Kingston, we scored 1 win and 1 draw. I’ll rate that as a creditable success!