Christof B., new Hammer member, gives an account of his first over the board chess tournament for nearly half a century. This is a fascinating article with a great outcome.

In his own words, read Christof’s modern chess odyssey.

With the Brexit date decided a year ago (I mean my personal Brexit, my last working day in corporate life being 29th March 2019), I had contemplated to resume a very early passion; CHESS.

How do you do that, not having played for a club or in a tournament for 44 years?

The Jersey International 1975 was my last one where I was lucky enough to finish joint 3rd, way ahead of a 9 year old Nigel Short.

Well, I tried playing against a computer (quite demotivating), read a few books, one of which “The Rookie” gave me some ideas, and I intend to play lots of competitive games. Playing in a  club is a must, and I was lucky to join the best one in early 2019, but unable to commit to weekday games until April.

I needed to find out about my level of chess fitness, or whatever is left from a long, long time ago. Thus, the East Devon Congress was a fitting trial, by coincidence its 44th event, so it must have begun life just when I had retired. 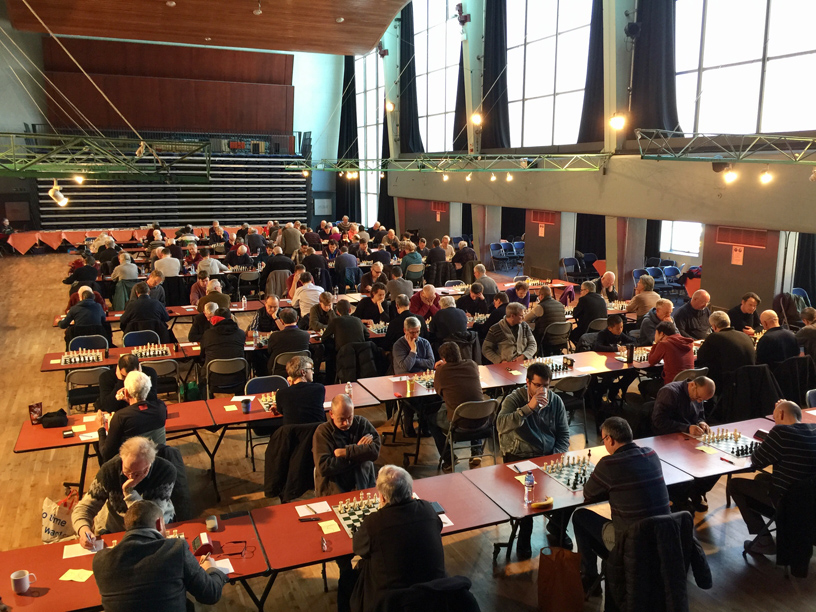 This one was a tight 2-day format with more than 120 players in 3 sections. Saturday is tough with three 3.5 hour games, plus 2 more on Sunday, but it is very worthwhile to attend. The venue is the Corn Exchange in the centre of Exeter, and the event is flawlessly organised.

Since I did not have the slightest clue about my current strength (grading was introduced after I had retired from chess), I registered myself in the Major section. To my annoyance, the organisers had added the informal 100e grade from the Hammersmith website to my name in the list of players, all of which were between 125 and 154, making me look a somewhat odd wannabe!

I immediately realised a visible change from four decades ago: then most players were old, now most are young – at least seen from my perspective. My opponents ranged from 13 to 71, both among the highest graded.

Well, the first game finally came, and I felt the same excitement building up as 44 years ago, sitting among the 120+ players, hearing the noise of 60+ clocks ticking, and my heart jumped to 180 (I hope my ECF grade will follow suit) when I realised the chance of winning a competitive game for the first time in 44 years. What a feeling!

Not so much like a Rookie, but like a Phoenix rising from the Ashes. And it was not so much the winning sensation as it was when I was young, it was the enjoyment of playing each move, like in the creation of an art object by two people.

Long story kept short, I added another win in the second round, then in round 3 the top-seeded player was waiting for me on Board 1, another new sensation for me, and I won as well. I was as pleased about how the game was played by both sides – see below:

1.d4 Nf6 2.Nc3 d5 3.Bf4 c6 4.e3 Bf5 5.f3 Is this variation still part of the London System, with a knight on c3 and not f3, and with a pawn on f3 and not c3? Anyway, the typical feature of “my” London variation is for White advancing pawns on the king side and in the center and for Black the same on the queen side.

e6 6.g4 Bg6 7.h4 h6 8.h5 Bh7 9.Bd3 Bd6 10.Nge2 Qc7 11.Bxh7 Nxh7 12.Qd3 Nd7 13.Bxd6 Qxd6 14.e4 Qe7 15.e5 b5 16.a4?
The whole idea of blocking the black pawns with a4 is ill-advised. White should ride out the Black attack on the queen side and focus on opening some lines on the king side. The engine sees a small White advantage after 16.f4
and even allows White long castling! The follow-up in the game with the white knight moving to a2 and b4 and the closing of the pawn structure there with 22.c3 helps Black. The only benefit is of psychological nature in drawing Black’s attention (too much) to the queen side, but that is not a good advise for a strategic decision.

32…Rb5? This is losing valuable time. The music plays on the other side.33.f6 Qe8 34.Qf4? First, this is against the principle of pushing with the Queen behind the Rook(s) and not in front. Very concretely however, immediate 34.fg allows beautiful continuations with decisive White advantage. I would invite to self-think along the lines after 34.fg Kg7: stated below.

Admittedly, I used the engine after the game to prove the correctness of fg. Obviously I did not see the forcing lines on the board, just before time control and 1 or 2 minutes left (until move 36).

34…Rcxc5 35.dxc5 Ra5? 36.fxg7 Qe7? This proves that it is much more difficult to defend than to attack. An attacker might lose an advantage, the defender the game. Qe7 loses directly (if White plays it right), but as the engine shows, the alternative Kg7: still leaves a big White advantage after 37. Ne2 with the intention to exchange first the knights on f3 and then the queens on g5. 37.Qf6! With time control over and with 15 minutes for the rest of the game, there was some quality time to think. And it still looked beautiful, the Black king to be imprisoned on g8 and so many attack avenues available. But, still so many possibilities to go astray

Qf6 threatens Qh6: and Qh8 mate. Qf6 however only works in combination with the next move and the further sequence which was needed to be seen, otherwise the re-taking on f6 with the rook as best in previous moves would have come more naturally to me. This is a great position for calculation training and for finding mating patterns. Which one is followed through depends on Black’s moves. The sequence played in the game is just one of many possibilities, one more beautiful than the other. I do not want to spoil this experience by showing what the engine proposes.Qxf6 38.exf6!!

The black position looks bombproof, the pawn structure intact and the knights protecting the elements of the pawn chain. Yes, the Black King is imprisoned on the last row, but the access for White rooks is blocked where you see, the barrier e6 over-protected by a pawn, 2 knights and the rook on a6. And still, danger lurks from the White knight on g3 with its potential to jump all the fences, and e6 will be the weak spot to fall.

Another win in round 4 and I was already a full point ahead of the rest, was assured of 1st prize and had to explain that I really had nothing to do with the estimate 100, that I would have been quite happy with just an UG.

In round 5, after only 10 moves, I saw a nice scenario to force a draw but my opponent decided differently and so I had to fight it out, taking more risks and winning this as well, making it sole 1st place for a Hammersmither.

What can I say, sorry for the e100 (but then, as an ungraded player i could only cash in the value of the 3rd prize!).

I apologise that I cannot write about the Open (serial winner IM Jack Rudd came first, FM William Claridge-Hansen second) and the Minor sections of the East Devon Congress, but I was completely absorbed in the great congress atmosphere, and my own rebirth experience after 44 years retirement.

This is my list of opponents and their grades: