A couple of thronking reports from the London League follow, but first up a reminder of Round II of our club Blitz Tourney!

Yes, it only seems like yesterday that we had our inaugural Christmas round of the Blitz tournament, but Round II is already now upon us.

As ever, the rules are very simple:

And so to the much anticipated match with Lewisham. I had expected them to be at full strength, rather like King’s Head in our previous fixture, but in fact they arrived missing some key players. This gave us a comfortable 10/20 grading point advantage on the middle and lower boards, which ultimately proved decisive.

That’s with the benefit of hindsight. We also had some problems when Marios had to pull out a day before, and Bajrush just before kick off. Both absolutely faultlessly I must stress, due to work and family priorities, but still not ideal pre-match.

As it transpired we won the match relatively comfortably, 7.5-2.5, though my own games complexity prevented me seeing much of the action on the other boards. So based on what I was told in the pub afterwards:

Board 1 – Chris: another flawless strategic masterpiece from our “Achilles”. At least that’s what he told me… I guess he plays better than Brad Pitt anyway. Seriously, a fine battling game, pressurizing a strong opponent into some middle game errors. I couldn’t persuade him to annotate it though…

Board 2 – Thomas played his customary power positional game, although I believe his opponent had very good drawing chances in a R+3p vs. R+2p endgame.

Board 3 – Carsten had a good position but lost after a very uncharacteristic tactical oversight. It happens to the best. As we are into our Greek heroes at the moment at Hammer, can I say “even Homer nods.”.

Board 4 – I had been joking with our super-sub Charlie, that even though he was only on hand as a spectator, he should keep his boots at the ready. I had in mind Sylvain, who was scheduled to arrive back from Paris just before kick-off, but as it turned out Bajrush’s late emergency dragged Charlie in at the last minute. What a solid performance he produced, confidently drawing quickly with a strong opponent. A big boost for the team. See below for an unusual treatment against the French Defence:

Board 5 – As mentioned, Sylvain arrived straight from the airport right on 7pm. Alas, he erred right at the very end in a rook endgame, after a tremendous tussle. No wonder with seconds left after a long, tiring day. But I think such selfless devotion to the cause is worthy of the highest praise: the true Hammer spirit!

Board 6 – Paul McK, making a welcome return to the team, brushed his opponent aside with his customary blend of iron logic and sharp tactics.

Board 7 – Thanks to the persuasive powers of our Celtic Tigers Supremo, Showbag, we welcomed Rauno to the team for his long-awaited LL debut. He wasted no time in demonstrating his class, first to finish, dispatching his bewildered opponent with some crisp, accurate tactical blows.

Board 8 – I was involved in a long, dour positional battle, interesting in all three phases. My slip in the time scramble at the end gave my opponent a fleeting drawing opportunity, which fortunately for me, he missed. Curiously, it was 40 years to the day from when I played my first serious graded game, so it was nice to get the full point.

Board 9 – Alexander continues to impress, turning in another smooth, well controlled performance.

Board 10 – Paul K produced a solid performance to down a former Hammer. 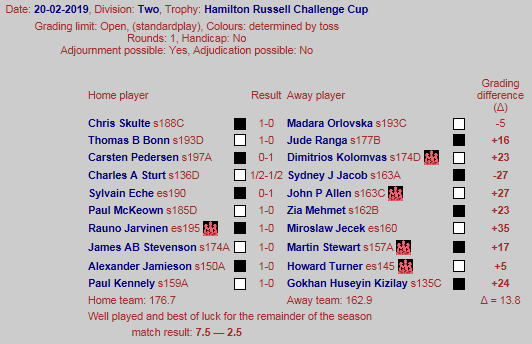 So the dogs may bark outside, but the Hammer caravan rolls on. Three more wins and that elusive first division winning lottery ticket is ours.

My Spartan call to arms before the match, “Hammers – what is your profession?” certainly provoked a favourable response.

Cavendish are one of London’s grand old clubs, and it’s always a pleasure to play at their venue. They always provide a warm welcome, with complimentary refreshments on hand, and an impressive set of full-size wooden sets. Alas, reserved for their first team this time around but let’s not split hairs!

Dave was acting as temporary captain in Rich’s absence and it was his match which eventually secured the draw in deep time trouble. I’m afraid that key detail explains the brevity of the notes that follow! I didn’t get to see much of the action on the other boards.

Andrew continued his unbeaten run for the Majors with a draw on board 3, but couldn’t convert for the full point. A similar story was in store for Joe on board 4.

Making his debut in the London league, he played the far more pressing chess and secured a pawn advantage. It looked like he’d romp home, but he admitted to a mistake in the latter portions of the match and had to console himself with the spoils shared. Still, great experience getting stuck into a full match over the board. I’m sure he’ll be an asset to the club.

Charlie, recovering from his higher-division heroics the night before, was pitted against veteran of the LL circuit, Ben Finn. A player whose 120 grade seldom does him justice. In fact, he’s showing his true colours this season playing c.20 points in excess of that.

Our man sacrificed an early Knight to gain the upper hand in development, and the imminent threat of reclaiming a minor piece in return. But there were a number of sharp tactics lying in wait, and precise play was needed to maintain the balance in his favour. It wasn’t to be, and Charlie succumbed, leaving us 1-2 down.

Dave tied up the match whilst defending a familiar line with the Sicilian. An early pawn was grabbed, handing his opponent the initiative but he couldn’t make it pay, meaning the +1.0 advantage was maintained and eventually extended as they entered the endgame. Time was a crucial factor as the analogue clocks ticked on, and despite missing an earlier 1-move mate (thanks, Charlie!) he had enough to hold out. 2-2 and a respectable draw.

The opposition captain Tomasz was a gentleman throughout. We wished them well for the remainder of the season as we sloped off to find a nearby pub.

The league table looks as follows. We’re in the mix, but the title may just be out of reach:

Next up is East Ham on 27th March. Get in touch with Rich Wingfield if you fancy playing that one.