A bumper update awaits – with the latest from across the club this week, including: A mid-season update on our Sister club the Celtic Tigers, a match report from the Middlesex League against our West London rivals…. West London, and the latest round of the Hammersmith RapidPlay League!

Celtic Tigers: Half way there, and livin’ on a prayer 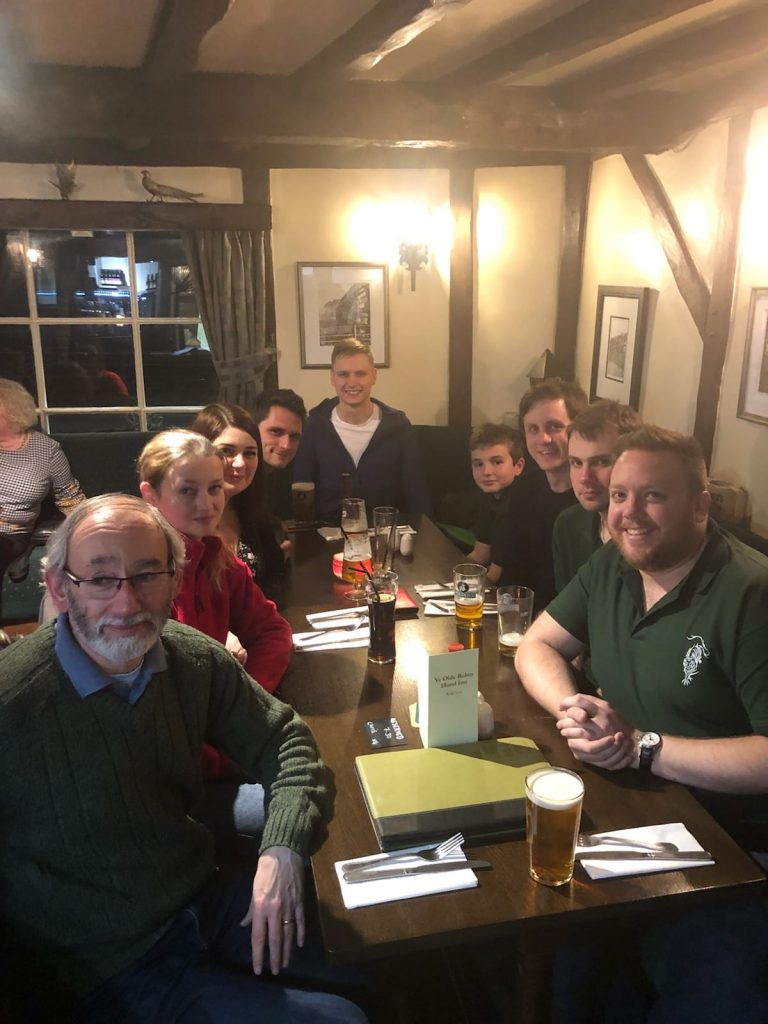 We entered this division as the bottom ranked team in the competition, and have since gone on to beat 3C’s, and Blackthorn Russia, both teams with an average rating >2300 (FM level), or roughly 215 ECF.

In the latest weekend rounds 5-6, we were playing the 6th and 7th ranked teams, with us only requiring 2 points to make the championship pool and qualify for Europe, where we will be playing teams filled with the top 20 players in the world! Amazing!!

To strengthen the team, we welcomed 11 year old Marc Andria Maurizzi to the fold, from Corsica. That’s right, 11 years old! With a FIDE rating of 2250 he is higher rated than world champion Magnus Carlsen at that age. Definitely one to watch. Here is his Sunday game, where he easily dispatched a 193 ECF – Murray Smith:

Unfortunately we lost the Saturday match 3.5-4.5, and drew Sunday 4-4. This meant that even though we are currently 4th, a likely loss in the final round means our destiny relies on the match between the 7th and 8th placed teams at the moment. So in division 1, we are now livin’ on a prayer! All will be decided on the 16th March, where we hope the Sharks can win or draw against the 3Cs.

This is the newest team to the Tigers roster, allowing a nice progression point for Hammers that want to compete on the national level. This year, players like Adam, John, Charlie and Bajrush have all stepped into the ring to test their skills against the best in the 4 nations.

We are currently ranked 12th out of 38 teams, with a respectable 2 wins, 3 draws and 1 loss. To get promoted we need to win at least 4 of the remaining 5 rounds, so it’s an upwards slug ahead, but definitely possible. 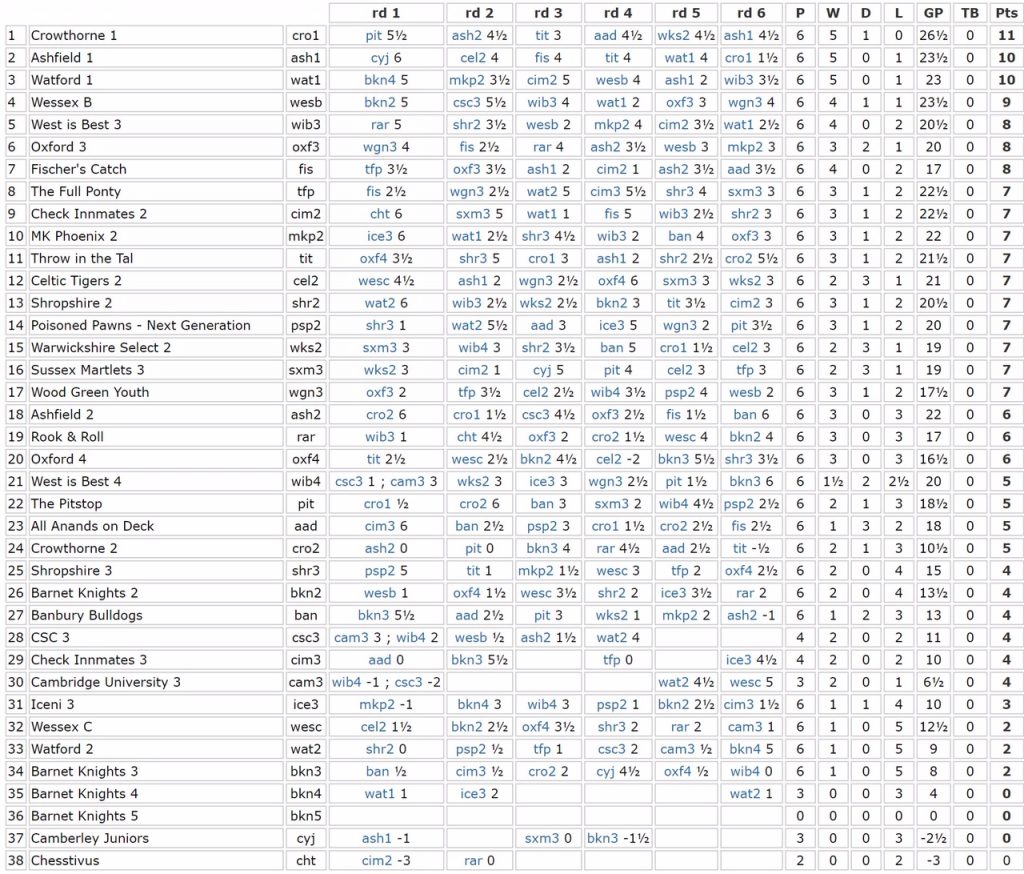 Here is an analysis video from Tiger Jacques on how to create fireworks against the Petroff:

If you have any questions about playing in the 4NCL, get in touch with Chris Skulte, who manages the team. If there is enough interest, we might expand to a 3rd team next season. Kostis is already begging for this!

More will come out in the next edition of the ROAR – the official newsletter of the Celtic Tigers, available here: https://www.celtictigers.club/newsletter

Until then, keep on having fun! :o)
Chris.

Last Wednesday, the Hammer 3rd team were in action in the Middlesex League. We hopped on bikes, buses and trains, venturing two miles West along King Street to be welcomed by the grand interior of Chiswick Town Hall. Our opponents on the night were West London, a chess club matching Hammersmith for history, but lacking the forward-thinking ideas needed for a modern club to blossom.

As a captain, it’s a big relief when everyone shows up! In this regard Hammer were flawless: the whole team were ready and raring to go at the agreed start time, despite only one of our hosts being present. With several Hammers recently becoming auto-nominated for the firsts and seconds, we had a refreshing mix of players.

As the opponents trickled in and their team sheet appeared, it was clear we’d be up against it. West London’s board 1 to 5 were all experienced 160+ players. From there, there was a substantial drop off, but five points would be enough for them to win. The room was arranged across four tables – I’ll start at the bottom.

On board 8, Ken played a long tactical game with mating threats for both sides. In time trouble, his opponent was always one tempo up, forcing Ken to concede material in an attempt to defend. In the end the pressure was too much and Ken resigned.

Liam, on board 7, was somewhat surprised to receive a blundered knight on move 3. From here it was plain sailing – his opponent refused to resign, instead heading for a hopeless ending a piece down. 1-1

Board 5 saw Jeremy looking for his first win for the club – it was not going to be easy as he was massively out-graded. With black in a queen’s pawn game, Jeremy was slightly premature in developing his light square bishop, falling victim to a typical Qb3 motif, with a double attack on d5 and b7 that was impossible to defend. His opponent made no mistake in converting.

To demonstrate the difference between the two teams, Robin’s opponent on board 6 was a full 32 grading points weaker than board 5, yet still had 24 points on Robin. Robin was not to be intimidated though. He refused to let his opponent castle, sacrificing a pawn to plant a delicious knight on c5 and later d6. A vicious attack ensued, and Robin scored a convincing win. 2-2

Jonathan’s fine run of form continues. Here he played impeccably against the opposition captain, graded 172, going a full pawn up with little in the way of compensation. Here his opponent offered a draw, and Jonathan reluctantly accepted. It was definitely the correct decision given the opponent’s strength.

Olivier was sitting next to Jonathan and ready to do battle. On move 13, he made the totally understandable decision to weaken his king to maintain a material balance. However, this ultimately proved to be his downfall. The correct decision was to sacrifice a pawn, opening up the position and activating Olivier’s bishop pair – a long term strategic plan that’s not so easy for us mere mortals to find.

So the team were 3.5-2.5 down, with just Soumya and Andrew left to face the top two West London players. The conference table they sat across was four feet wide and rather tall, meaning that neither player was afforded a bird’s eye view of their army. Both generals fought very bravely at the one dimensional board, but were ultimately slain. Soumya’s game was a strange closed Sicilian, clearly a pet line of her opponent, who knew exactly how to get the most out of it with the white pieces. I have no doubt both Soumya and Andrew will be pushing for first team selection in the near future.

Despite the loss, the league table is looking good for Hammer. Most teams still have half their games remaining, so it’s too early to start dreaming of promotion just yet.

The penultimate round of the 2019 Hammersmith Rapid League once again threw up some intriguing fixtures – a top of the table clash, a pride of hungry lions hoping to find a nice meal in Hackney, and a tasty local derby.

Would the destiny of this year’s title be settled and would matters carry on to the final week? Read on and find out…

Hackney vs. The Lions

I think the Lions have been the unluckiest of the teams in this year’s league. They have played consistently good chess and have been unlucky not to have points on the board. That theme continued tonight.

Despite drawing the first rubber 2-2, the greater experience of the Hackney crew meant there was no tasty meal.

I must mention Tianyou Xu here – a great performance on taking down the wily Hackney captain Brian, 2-0.

This was a top of the table clash that was meant to settle the destiny of the title At moments it looked like there would be a decisive result.

Alistair and Nadhmi swapped points on top board, and the same for Daniel and James on board 2.

Taymour has been in great form recently but he met his nemesis in the form of Radar’s Michael – an excellent 2-0 win for the Radar man.

Laith – the other third of the Auchi nation, and devoted Tiger, nailed it. A great 2-0 win made sure that the match was drawn and the title would not be decided until the final week.

“So, we meet again Mr Battersea” (a touch of Ian Fleming to spice things up) – yes, the latest derby match between these erstwhile frenemies took place on the evening. There have been so many clashes with out noisy neighbours this season, and it pains me to say that Battersea have definitely been holding the upper hand. Could Hammer reverse that trend in the Rapid League match up??

For a while matters looked promising – 2 points a piece after the first round with all to play for, but that solid iron man, Darius, scored a 2-0 win against Hammer hero and captain Kostis. The other matches were halved and allowed Battersea to shade it with a 5-3 win.

Hats off to Battersea – after their first-round defeat to the Radar team they have come back strong and are still in the mix for the title.

For Hammer, the league has been a story of so close, but so far – but shall be back!!

So with four of the five rounds complete, this is how the land lies: 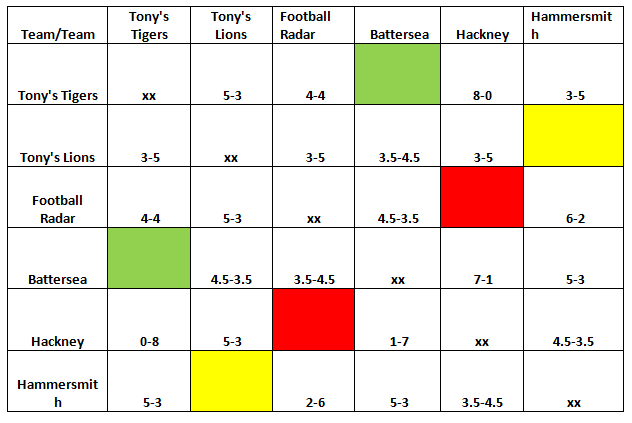 The destiny of the title lies in the hands of the Crazy Gang – if they beat Hackney then nobody can catch them. However, if they slip up, either Battersea or the Tigers could sneak through and pinch the title.

things are coming nicely to the boil with three teams in for the title and all to play for.

The “Winter Break” now kicks in, and the final round will be played on the 2nd April – till then folks, live long and prosper.