El Chess Up in a Brewery – it’s on! This Saturday 26th, Hammersmith will be taking on local upstarts Battersea, in a Rapidplay tournament at the home of Wandle, Sambrook’s Brewery! 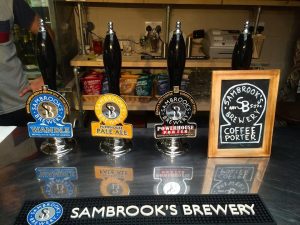 Starting at 1pm sharp, and running all afternoon (until roughly 5pm), we’ll be in the taproom at their Brewery on Yelverton Road, SW11 3QG – nearest station, Clapham Junction!

It will be 15 minutes per game, with 3 sec increments, with some handicaps for extreme grading differentials.

It’s going to be a fun day, and we hope to see you all there – the venue is superb and the beer outstanding, and well-priced!

The Hammersmith Rapid League 2019 – Round I

This is the league where you play two games of rapid chess against the same opponent each night – one as black and one as white. All the games are rated and count towards an ECF rapid grade.

What more could any chess player want??

This year’s lineup was as follows:

To the matches – the first round saw some really close matches with an internecine battle as the Tigers took on the Lions, Football Radar taking on Battersea, and Hackney squaring up to the Hammers.

This was a seriously competitive match with a real heavyweight clash on top board, and the other three all closely contested. All the games went to the bitter end with no quarter given.

The Lions shaded it in Round One, with wins for Connall and Xu. Taymour struck back for the Tigers and the top board was drawn.

The Tigers had been wounded but were not down – the come back was possible. Plus we all know there is nothing more frightening than a wounded Tiger.

The second round saw the Tigers go to work and with three wins and a draw they swept to a well-deserved victory. Both these teams will be serious contenders for the title.

This saw the clash of the newboys. Football Radar, and our beloved Frenemies Battersea.

Things did not go well for the Footy boys in the first round and they succumbed to a narrow but decisive 3.5-4.5 defeat. This match really could have gone either way and Battersea can consider themselves very unlucky.

Great performances from both Alistair of the Radar and Darius of Battersea, who both went 2-0. The game that attracted my attention was the second game between Alistair and James that had a very nice tactical sequence. It is one that will hopefully feature in a later posting.

Following the trend set by the other two matches, the Hammer boys were leading 2.5-1.5 at the halfway point. It could have been a half-point more but for a tactic missed by Wyatt. That game was the longest of the first round and could have gone either way. In the end, stoic defence from Wyatt secured the half-point.

However, the Hackney boys were not down, and definitely not out. They rallied superbly in the second round of games with three wins on the top three boards. Dipli bravely held the line on board 4 against Hackney captain, and great bloke, Bryan, but alas could not prevent Hammer going down 3-1.

A tough loss for Kostis to take, especially in his captain’s debut, but he can feel proud of his team.

Congratulations to captain Bryan and the Hackney team – they really fought back well. The sportsmanship in this contest was totally indicative of the whole evening, and all teams and players must be applauded for that.

So after Round I the cross table looks like this:

Roll on Round II – we look forward to seeing all the teams back on the 29th of January!

With Adam away gracing Europe’s ski slopes, it was left to your author, Dave, to captain the Hammer side in Middlesex Division 3, as we took on Harrow 2. Fortunately we ran out 4.5-3.5 winners which meant I could welcome Adam back with some good news!

In the end, a very satisfying victory against a side almost matching us grade-for-grade as we moved down the board order. Even more so when you consider that we started the match 1-0 down due to a default. Very well done one & all… !

I’m able to present two games for your enjoyment here, both of which ended up as full points for the good guys.

Brian secured the victory with some aggressive play as White in a Sicilian Najdorf, creating complications which ultimately led to a tactical mistake from his opponent. Some fine play, particularly when trying to make up some time on the clock.

Your temporary captain for the evening took home the point after playing out a slightly unusual encounter. Playing as Black, I felt I was slightly on the back-foot for the first 14-15 moves before my opponent exchanged several pieces. Each exchange seemed to favour me, and before I knew it, I had some fairly well-placed pieces, with the threat of mate or serious material advantage. Resignation soon followed.

The lovely folk who sponsor us, Chess & Bridge, are happy to offer any Hammer Members a FREE 3 month subscription to Chess magazine!

To claim this offer, simply drop them an email info@chess.co.uk or call them (020 7486 7015), and provide your name, address, telephone and email – of course, mention Hammersmith Chess Club!

Offer is valid until the end of Jan, and it is well worth signing up – a great magazine, and 3 free issues is a great offer!