Our LL First Team suffered its first setback of the season at Imperial College last Thursday evening. There’s no denying that it was a disappointing result, and something of a Reality Check regarding our prospects for the season. Nonetheless it was always going to be a close match, and with a little more good fortune we could well have taken the points. 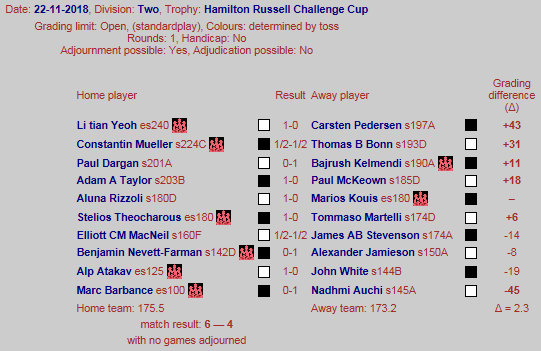 Imperial are a typical student side. Lots of very strong players to call upon, but the difficulty in consistently fielding a strong team might prove their undoing as the season progresses. This was a re-arranged match. The original match was scheduled for next April, during the university holidays and exams period. However, I did not want to exploit such a state of affairs and readily agreed to their captain’s please to bring the match forward.

The bright spots in the match were Thomas’s hard fought draw. Bajrush’s good form continuing, and in particular I was delighted with the wins gained by our two junior players. Nadhmi won quickly and efficiently, and Alexander played a very accurate pressing game and showed excellent endgame technique. They both have very bright futures in chess ahead of them.

Despite Imperial fielding a 2500 fide-rated player on top board, and three other 200+ players, we held our own on the top boards, and scored 2/3 on the bottom boards. We lost the match in the “engine room” of the middle boards. It happens. As always, every Hammer player gave 100% effort and commitment.

Onwards and upwards. We play LL matches virtually every week during January and February. Our next match, versus Metropolitan, will be crucial. I ask everyone in the squad to consult their 2019 diaries and rally to the cause. We shall need all hands on deck if we want to fight for promotion.