Our second match of the season, versus Hackney 2 last Wednesday evening at the Citadines, ended in a convincing 7-3 victory. However, as is often the case, the win was not quite as comfortable as the final scoreline suggest. 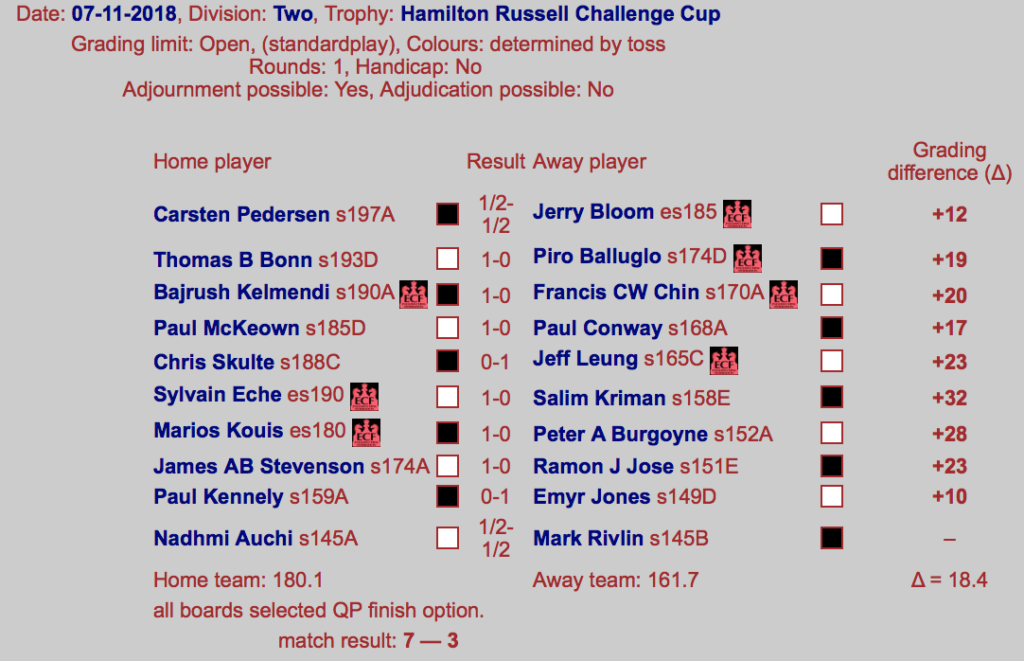 On paper, a comfortable grading advantage of between fifteen and twenty-five points on most boards suggested a comfortable evening, and initially it all went to plan.

Carsten played a solid draw as black on top board, while Nadhmi (board 10) battled very hard and was unlucky not to break down his solid opponent.

Three wins in quick succession for myself (board 8), Sylvain (6) and Bajrush (3) put us in the driving seat. Impressively, Sylvain had arrived back from Paris just an hour before play began, and won neatly and without fuss. Bajrush played a smooth positional game against a tricky opponent.

Paul K (9) went down, but Marios (7) soon notched up the point to take us to 5 points. But then it got a little sticky!

Chris (5) was a piece up early on, but his opponent played resourcefully to conjure up some initiative, and playing to win, as sometimes happens, Chris’s King got caught in the crossfire. 5-3 and worse looked set to follow as Paul McK (4), having played a fine attack against the French Defence, went astray in time pressure. Meanwhile Thomas (2) was playing a fine game but the position remained complex as the time ticket away.

But there was no need for the captain to get nervous. Paul regained his composure, regrouped his remaining pieces into the attack and snap mated his opponent after a blunder. A rather poetical, even somewhat mythical, scoreline: as any old soccer ball fan will tell you, the greatest match every played also finished (Real) 7 – (Eintracht) 3!

So, two solid wins, sitting second in the table, and a really good spirit in the team. The captain is happy. Next up before Christmas is a tough away fixture at Imperial College.

I hope to persuade Bajrush and Marios to annotate their games. In the meantime, I offer you my own speculative hack. A scrappy game but tolerably entertaining if you like the 19th Century style.

And… The World Championship

In case you haven’t heard… the Chess World Championship match is taking place in London at the moment (check out Chess & Bridge Shop if you’re looking for somewhere to watch it in central London!)

Our good friend the Ginger GM (aka GM Simon Williams), is doing a frankly superb analysis of each game on his YouTube channel. It is well worth a watch – the GM-on-GM insight is something to behold and savour!

Link here and video below – enjoy!!!