Register by 13th October to Guarantee Your Place!

The Hammer Internal Rapidplay Tournament is back! Last year’s tournament was a great success, and we hope to build on it this season.

With a score of 7.5/8, our chairman Bajrush was last year’s clear winner in the Open section, and he took home the trophy. Grading prizes were awarded to the following:

Undoubtedly the real winner was Hammersmith Chess Club, who now boast 31 players with a rapid grading, up from 20 in January 2018! 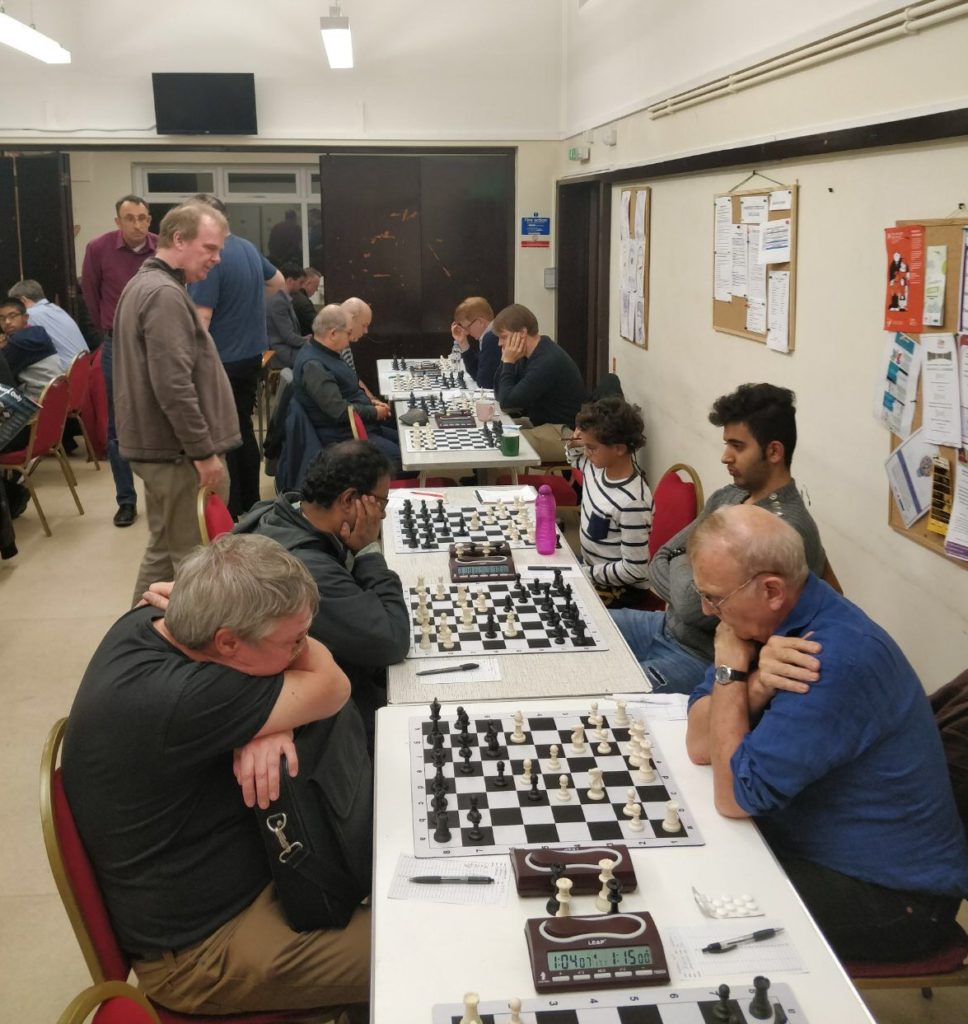 This year the tournament will be run over 7 matches, down from 8 last year. Pairings will be decided by a Swiss system, and the controllers will be Adam Cranston (Middlesex 2 Captain) and Dave Lambert (London 4 Captain). All matches will be graded with the ECF under ‘rapidplay’.

This year there will only be two rounds before Christmas – the first running from mid-October to mid-November, and the second from mid-November to Christmas. After Christmas we’ll revert to one round per month.

It’ll be up to each of you to track down your opponent and arrange a time/date of your choosing to play – we’ll provide the necessary contact details. We ask for you to do this within the first week after pairings are released, and enter the agreed date and venue into a shared spreadsheet.

With fewer matches on Monday’s at Lytton Hall this season, we hope these will provide a good opportunity to play your games. This is not a requirement though – the game could be played at one of your houses, or down the pub. It really doesn’t matter as long as you’re both happy with the conditions & the game gets played within the month.

You arrange your match and enter it into the spreadsheet; You play your match; You let Adam & Dave know the result, and they’ll do the rest.

They’ll tabulate the standings and publish the next set of pairings at the start of each round. Then you’ll have the next week to arrange Game 2, and so it goes.

Prizes will be awarded for the best score in each of the below categories. No one will be eligible to win more than one award:

Grades will be based on the July 2018 grading list

All players will be permitted to take a maximum of 2 byes over the course of the tournament between rounds 1 and 6, scoring 0.5 points in each case.

Requests for byes must be submitted in advance of the end of the previous round.

Late entries may be permitted at the discretion of the tournament controllers. Late entrants will start with 0 points as standard.

Failure to arrange a match within the first week: Both players will be awarded 0 points. Unless a player can demonstrate they have made reasonable and repeated (3 or more) attempts to find a suitable time & date for the match, in which case they may be awarded the win by default.

Failure to complete a match within the designated month: Both players will be awarded 0 points.

Adam and Dave to make the final decision on any disputes.

The tournament controllers reserve the right to make minor tweaks to the tournament as the season progresses due to unforeseen circumstances. In such a scenario, a written update will be provided to all the players.

If you have any questions, please drop Adam or Dave an email:

And remember – if you wish to play, please let us know by 13th October at the absolute latest. We’ll produce the first set of pairings shortly after the deadline.

Thanks, and good luck!