The inaugural Hammersmith League came to a dramatic conclusion last Monday at the Anvil – with three teams in with a shout for the title.

In pole position the SW Juniors, followed closely by the Hammerheads and the Circus. Battersea were playing for pride and honour.

That doyen of football analysts, Alan Hansen in 1995, after watching a young Manchester United team crash in their opening game of the season opined, “You can’t win anything with kids”.

He was subsequently proved wrong by those same kids when they secured the Premier League title later that season. Not the first time a pundit had egg on their face. I must confess when looking at the teams this season in the Hammersmith League I thought the winner would come from Hammersmith or Battersea.

The SW Juniors would be gallant participants but older wise heads would rule the day.

Show you how much I know!!!

Before I get to the bones of the finale I must correct an error in the table of the last report. I got the points plus wrong, so here is how things actually stood before the last round:

The SW Juniors were flying high and “just” needed to win their last match to secure the first Hammersmith Rapid League Table.

The final pairings were as follows:

To the second match first. Battersea have had a tough tournament and were in all reality only playing for pride. However, our noisy neighbours are not ones to go down without a fight, and in an excellent display inflicted a decisive defeat on the Hammerheads: 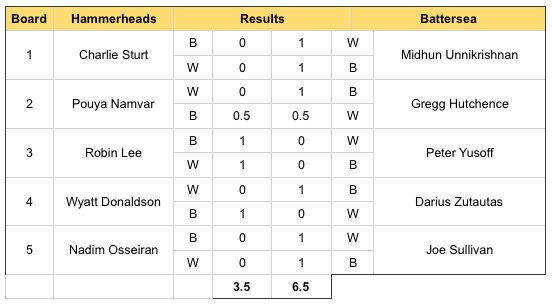 A great performance that took the Hammerheads out of the title race and restored a lot of pride to Battersea.

This meant the destination of the title was down to the SW Juniors match against the Hammer Circus.

I can report exclusively for the Hammer website that the Juniors stayed strong and are deserved first champions of the Hammersmith Rapid League. Many congratulations to them!

Clueless has joined Alan Hansen with egg on his face!!

The scoresheet reads as follows: 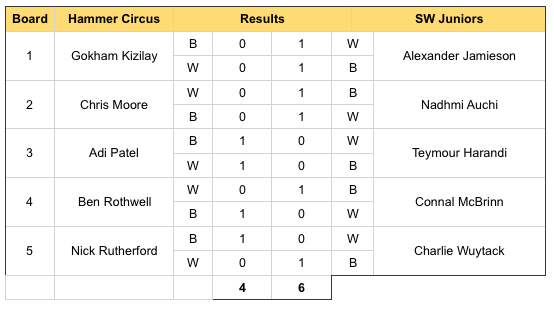 Only Adi for the Circus held the line and won his individual match.

The SW Junior heavyweights Alexander and Nadhmi were in dominating form and scored a clean sweep. Both Connal and Charlie delivered the extra points needed to secure the win and the title.

The SW Juniors are champions and it proves kids can win championships. Their coach Tony Niccoli deserves great credit for their result.

My only advice to my fellow Hammerites is watch out! These kids are good and they are coming.

The final table and standings are as follows:

On a final note I must pick out Alexander Jamieson as player of the tournament with an ultra-impressive 6/6, a definite start of the future.

Roll on next year and hopefully we can have even more teams competing!