The Middlesex League season has drawn to a close with the last match of the season for Hammer 2 in division three. We descended on Kings Head’s pub venue with the enviable mindset of knowing we were already promoted. It was a chance for some of Hammer’s newer recruits to stamp their mark on the league, and for the MVP contenders to rack up one last win.

On boards one and two, Simon and I were paired against two of Kings Head’s ruthless 170+ players. Neither of us played a fantastic game, and as one might expect, we found ourselves in difficulties early on. We both left castling a bit too late and paid the price, coming under deadly attacks culminating in resignation. 0-2

At the other end of the room, Jeremy and Wyatt sat down on boards seven and eight with a tiny grade advantage. What’s opponent played quickly, exchanging down to a pawn endgame that was very difficult to hold. Here Wyatt’s rigorous endgame training regime, courtesy of the John White Drinking Club, came into its own. He played very methodically, queening with one tempo remaining to stop his opponent doing the same.

Jeremy played a promising defence against the King’s Indian Attack, but ultimately failed to find a good plan. After losing two pawns rather cheaply it looked like it might not be his day, but luckily his opponent blundered a rook in a winning position to hand Jeremy victory. 2-2

Boards five and six were occupied by John Ryan and Dipender, both of whom have been integral to the team’s success this season. John’s endgame was incredibly sharp, with both players possessing plenty of heavy pieces and weak squares. Coupled with five minutes each on the clock, there was no way they could calculate all the variations. John mustered up a brave attack on the enemy king, but couldn’t quite find checkmate. Sadly this left his own king very vulnerable, and saving it cost too much material and the game.

Dipender’s game was far different. In a Sicilian Dragon, Dipender held a slight advantage with the white pieces before his opponent blundered a bishop. From here the outcome never looked in doubt, and with the win Dipender joins Simon and John on a very respectable 4/6 for the season. 3-3

And so our fate was left in the hands of Charlie and debutante Adi. From the outset, it was clear Charlie’s opponent was not set up for a sharp game. Charlie tried his best to spice up the position, rejecting two draw offers, before finally accepting the third, by which point his position was slightly worse.

On the white side of a Semi-Slav, Adi started off very strongly, building up a big centre and eventually winning a pawn. He thought he had spotted a knight sacrifice that would deliver mate in three, but as can so often happen in chess, he had overlooked one small but important details – that the knight capture would give check and pick up a game-changing tempo. Two moves later, Adi threw in the towel. A frustrating debut, but from what I’ve seen, I have no doubt he will be a key player next year as we look to preserve division two status. 3.5-4.5

With two matches outstanding, we can only be caught by Hendon, and only if they thrash Kings Head away from home.

Adi becomes the 25th player to play this year, three short of last year. With eight of the club’s top players ineligible due to first team nomination, I’m extremely proud of the strength in depth the club now possesses. Having seen so many great performances, this year’s MVP will be a very tough choice.

Bring on next year!
Adam.

After the Greek Tragedy in W1 there had to be a rebound in WC1V. Redemption was the only course on the menu for the boys of Hammer.

Welcome to the latest boy’s own adventure of the voyages of the Starship Hammer 1 and its one-year mission to boldly go to Division 3 of the London League.

In homage to our Chairman, we open this report with two Albanian words:

Hammer 1, after undergoing repairs and mental retuning, has locked into orbit around the planet Cave-N-‘Dish in the Holborn quadrant of the Londinium galaxy. The mission was a delayed encounter thanks to the machinations of “The Beast from the East” and hence was played at the Citadines complex rather than the home planet of the ‘Dish.

This was a task again deemed critical by Starfleet – with the added pressure of Hammer 1 having to regain their collective mojo.

What would the response be?

Clueless, despite missing Sydney and the Suit in the landing crew, was glad to welcome back the talents of Wily and Forza. This was destiny time – seize it and Hammer 1 were firmly back on track.

The landing part in board order:

Hammer got a break before the match started when Cave-N-Dish forfeited board 10 – Hammer 1-0 to the good.

First game to finish was Wily in crisp and rapid form – his opponent a former Hammer captain, took him to the 30 minute mark before resigning in a hopeless position. For those sadists amongst you, here is the encounter:

Next to join the party was Pandit, who won in less moves than Wily but his opponent consumed large amounts of time and hence he spent longer at the board. This was another chess massacre and Pandit continues his return to form. Hammer now at 3.0 warp speed.

Next to extend the Hammer lead was Forza – employing his usual tactic of consuming more time initially and sacking a pawn in the opening for dynamic piece play. In no time his pieces were swarming over the White Kind and the end followed very swiftly. Hammer cruising at 4-0.

Hammer were pegged back in the next game when Brexit blew a winning position and succumbed to a tactic that had more points to it than even his opponent saw. Indeed, it was only in the post-game analysis he realised the full implications – I will say this only once – I was gutted for Brexit and frustrated for him. Despite his stance on the Brussels matter he is a good bloke and a devoted Hammer player. His form is uncertain and he has definitely hit the Irish Border conundrum. I am sure he will solve it, unlike HM Government, and move back to his best form. Hammer stuck at 4-1.

That was the only setback of the evening.

Loco playing a Kings Gambit was in scintillating form – the game was a real throwback to the Morphy-chess era. It was great to watch and demonstrated that as well as being an accomplished positional player, Loco can, when required, go “Loco tactical“. The ending was prosaic with Black losing his queen in one move or two Hammer now at 5.1 warp speed.

The Prof, with the black pieces, faced an opponent who was determined to keep the position as dull as possible. The Prof with the bishop-pair advantage probed, provoked, and induced square weaknesses around the White King. White’s position deteriorated rapidly and under pressure he succumbed to a tactical shot of Qxh4+ with White unable to take the Queen due to a bishop pin. Faced with a complete collapse in his position his opponent gracefully resigned. Hammer at 6-1 with the match victory secured.

Dead-Eye going into this encounter was on 94% for the season and after it had moved to 95% for the season. Playing the black side in the French defence he snaffled an early pawn then grabbed another two. White tried a desperado attack that was coolly repelled, and then Dead-Eye simply marches his c-pawn to c2 and that was that. Hammer at Warp speed 7.1

The last two games to finish were the top two boards.

T-Bone on board 1 was facing a familiar face in LL chess – the captain of Cavendish 3, Bertie Barlow – who definitely knows a thing or two. T-Bone consumed huge amounts of time trying to find an edge in a position that was fairly sterile. Despite having the two bishops he was encumbered by the fact that the position was closed and one of those bishops had defensive duties. Thomas is the most visually expressive player we have in the club – you can almost sense what he is thinking. How he achieved victory is beyond me, but he did – and that was purely down to sheer willpower and tenacity. Hammer at 8.1 Warp Speed.

Zeus played in the only slow-play game of the evening. Why oh why do we persist with this anachronistic version of our game? It is an absurd and outdated option in the modern world of computers and busy lives!

Rant over and now to the actual game. Zeus has been in uncertain form in recent weeks but tonight was the night he returned to form. Dominating an open c-file he induced and injudicious b-pawn advance form his opponent. This duly got consumed and then Zeus opened up the King-side. The game was adjourned at move 35, with his opponent sealing the move. Pub analysis indicates that Zeus is +1.7 and has multiple ways to win. The hope is that his opponent will see sense and resign, otherwise the game resumes next Wednesday.

Hammer at 8-1 with one game adjourned. A dominating performance by the Hammer crew – they totally bossed the planet of Cave-N-Dish.

Clueless announced part 10 of the mission had been successfully completed and has resumed his state of inner peace and contentment.

I leave you with the match card and latest table: 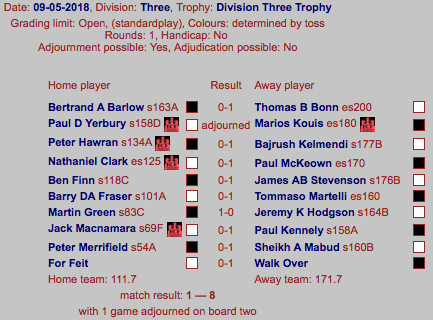