There is an old adage that states every good run comes to the end. This is the best that can be said of a tragic cold Monday night in Fitzrovia. In scenes reminiscent of Medea and Oedipus Rex the Hammer 1 juggernaut came off the rails at the hands of Albany, crashing to our first defeat of 2018.

Welcome to the latest instalment of the Starship Hammer 1 and its one-year mission to boldly go to Division 2 of the London League.

Starship Hammer 1 has gone into orbit around the Alba planet of Wheatsheaf in the Fitzrovian quadrant of the Londonium galaxy. The upcoming encounter of chess mental gymnastics is laced with potential venom and hidden danger. The playing venue has alcoholic distractions available and there is a hint of a Welsh poetic voice in the air as well as shades of Animal Farm and 1984. This planet has ghosts from the past.

Clueless is wary and concerned that there may be too many distractions and a possible air of complacency in the landing party. He is at fever pitch, the weight of expectation almost unbearable.

Read on if you dar and see if you can spot the use of Newspeak in this report in homage to George Orwell.

The team assembled on time, in the right place and in the right frame of mind. We had a strong team, confidence was high, the banter beforehand was spot on – surely nothing could go wrong.

We had a new board one Rauno – aka “Sync” – a miserable play on the capital city of a great country – Finland.

The team, in board order:

Sync playing on board one returned to chess action after a substantial break from the game. He was delighted to be playing again. Indeed, all seemed well at first and into the middle game. He had established an edge with the white pieces and was on the brink of launching a devastating queen-side assault with a free bishop controlling d8. Alas, a couple of mis-moves followed and he allowed black time to mount a vicious attack on the kingside. The end was swift and Hammer were 1-0 down.

The T-Bone had an unnerving encounter of playing an opponent who always arrives 30 minutes late and then proceeds to play at Wily Ward Speed. Clueless counselled T-Bone on this matter beforehand and all looked well. Thomas was a pawn up and consolidating his position – he had two bishops versus two knights on an open board – he was in control and having a good think. Unfortunately, he placed his rook on b8 instead of c7 and this allowed a nasty white knight to jump in on c6 and pin his bishop. T-Bone has an excellent face crime face and I could clearly see his frustration. Despite strenuous and ingenious efforts, he could not avoid material loss and the rest of the game was a rear-guard action without hope. It was genuine daylight robbery. Hammer 2-0 down.

Board 3 saw Zeus in action. Even for a God, Zeus has played a lot of chess this season and in recent games has displayed a touch of weariness. Other possible explanations are a recent trip to Olympus or the amount of beer consumption and his recent love for karaoke (see our @Hammer_Chess twitter account for evidence!). Whatever, the answer to this dip in form is, it initially continued in this match. Zeus dropped a pawn in the opening – but this time there was no doubleplusungood ending as he fought back and equalised. A draw was agreed shortly afterwards – Hammer on the scoreboard but 2.5-0.5 down.

Board 4 saw Sydney in his worst sober game of the season. Facing a Bajrush-style opening with the black pieces he got himself into a real positional bind. His strategy was totally malquoted. A desperado exchange sacrifice did not relieve the pressure on his position and the rest of the game  was a matter of technique for his opponent. A truly horrible game for Sydney and very frustrating for him. It was just one of those nights when Caissa dished out a bit of humble pie. Hammer down 3.5-0.5 and Clueless reduced to downing pints and cursing Dylan Thomas and anyone else he could think of. 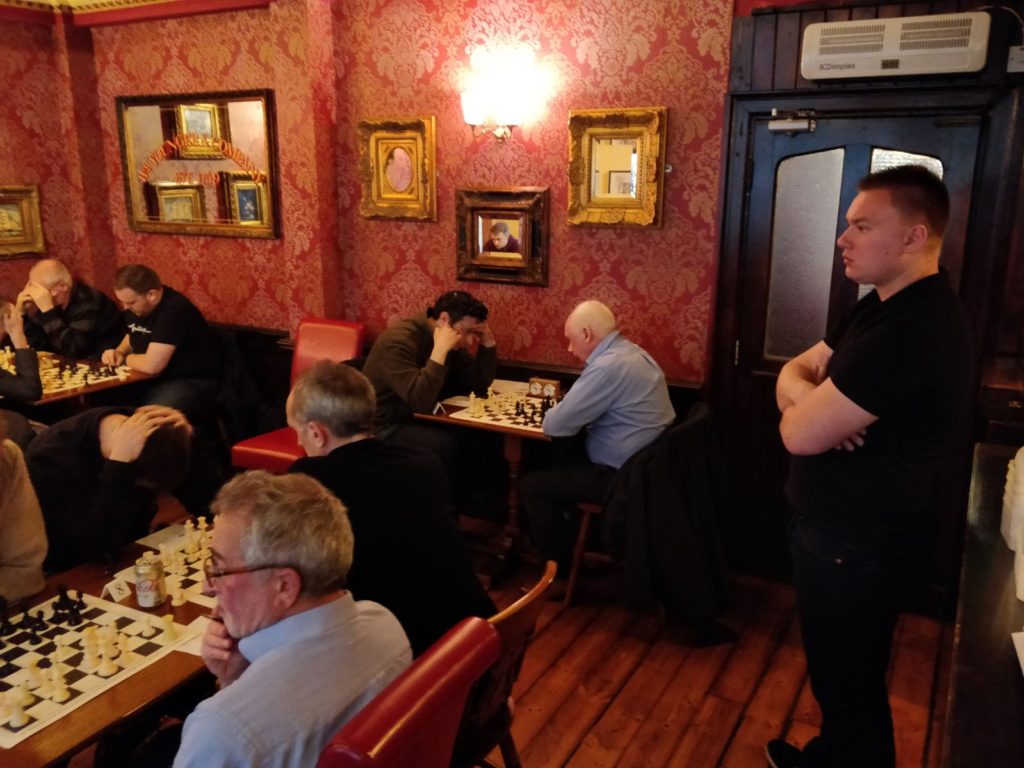 Loco on board five would surely stop the rot. Indeed, he did, but the combination of a slightly annoying opponent and a fairly dull position conspired against him converting the edge he had. In the bar afterwards, he confessed to a bellyfeel about the game that indicated it was going to be a draw. Hammer trailing at 4-1 and stick in impulse rather than warp speed.

Something had to change and the burden of recording Hammer’s first win shifted to the Prof. I have to confess Clueless was most anxious in his periodic visits to the board and altogether gloomy about the outcome. However, I forgot the Prof always takes the “Reverse Amber” approach (Rudd – I will not resign) and keeps throwing oil on the fire. This Lasker approach will always produce results, especially in mutual time trouble, and the Prof duly converted. The Prof along with Wily has more lives at the chess board than a cat, and his uncompromising approach will always yield interesting games that test the nerves of his opponent as well as those of his captain. The record does not lie and his record this season shows a clean sweep when he has played.

Hammer now at 4-2 but still stuck in impulse speed and the core reactor was still misfiring.

The fate of the match then moved to the next four boards and Clueless had assumed a more optimistic air. The outcome of the match was still to be played for and Hammer were well-placed in all four games. A definite case of plusgood.

Board 8 saw potential player of the season Dead-Eye once again deep in thought. Paul really is a picture of concentration at the board as he summons all his willpower for the coming struggle. This night was no different as he went into ownlife mode and struggled mightily to force a win for Hammer. It was a tough game as his opponent was obviously settling for a draw and that is what he achieved. Hammer now at 4.5-2.5 and still in arrears.

Pandit on board 9 once again rubbed Hammer salt in the wounds of his opponent, Charlie’s (Sorted) old maths teach, and scored a dominating win. I was so pleased for Pandit as he has had some tough losses this season and this was a return to form and most welcome. He induced a black-square weakness around the Black King and basically was threatening checkmate in a variety of ways. It was great to see Pandit playing effortless chess, it was total duckspeak. Hammer at 3.5-4.5 down.

The Suit played a perfect game against a lower-rated opponent. Snaffling a pawn and exchanging down to a King and pawn ending. He then demonstrated technique forcing his pawn through and gracefully accepting the resignation of his opponent. It is a minitrue that he is returning to his best form.

Hammer equalise at 4.5-4.5 – and like real political life, it was all down to Brexit.

I must add a caveat here and state I have taken writer’s poetic license here to add to the drama of this report and Jeremy’s game was not the last to finish. I have to confess employing goodthink to produce this report.

Brexit with the white pieces seemed to have everything under control despite his opponent controlling the f-file. Clueless was definitely not concerned and there was no hint of a hard border for Brexit. The conclusion was nothing to rectify here.

Unfortunately, this was just one of those nights and nothing really went Hammer’s way after a couple of mis-moves on Brexit’s part the game was over and Hammer had lost 4.5-5.5.

Clueless was distraught despite several pints of beer thrust into his hand he was inconsolable. On reflection I realised that nothing had changed – this is not newspeak – our destiny is still in our hands and if we play to our best we will go up and complete the mission.

My challenge to the Hammer boys is it’s do-or-die time, the clock is at 11 minutes to midnight and we have to seize our destiny. Hammer will win through, we are too good a team to let this golden chance slip.

This is not thinkpol on my part, nor fake news, but reasoned logic on how this team has performed this season. We will not be denied.

I leave you with the match card and current division standings. 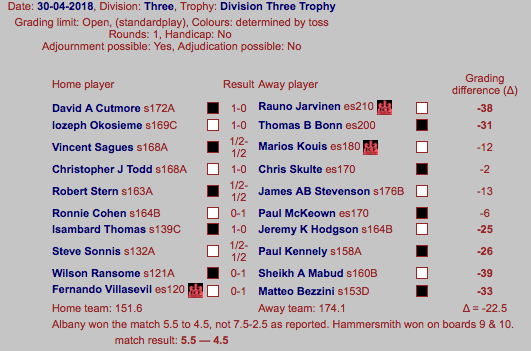