Yes, welcome to the latest instalment of the Starship Hammer 1 and her one year mission to boldly-go to Division 2 of the London League.

Partie sept et huit – Starship Hammer has gone into prolonged orbit around the binary planetary system Battersea Chessicus (BC2/3) – the mission, to meet with the noisy neighbours/strange inhabitants of this world. Thankfully, on the whole the people of BC2/3 are overwhelmingly friendly. The question is how would relations between our peoples be after two deadly encounters in over the board chess mortal combat?

This latest assignment has been given the code name “El Chessico 2018” and designated as mission critical by Starfleet Command.

The Hammer 1 voyage has reached a seminal point – successful in this enterprise and we would be in the home straight and prime position to successfully conclude our overall goal. I had much to contemplate with landing crew selection vital in achieving the mission objectives. With the background of unknown diplomatic consequences – as well as two vital chess matches to be won – this was Hammer 1’s severest challenge.

How would matters unfold?

The first encounter saw Hammer take on Battersea 2. My report is tempered by the fact I was playing as well.

The Hammer 1 crew was greatly depleted, missing the huge talents of Paul (The Prof), Chris (Sydney) and Thomas (T-Bone). Fortunately, willing and very capable deputies were on hand.

The Hammer team roster, in board order, comprised of:

Zeus, with the white pieces, took on the most innovative chess impresario in London Chess – Aldo on board one. Aldo had prepared a devilish line that required Zeus to tread a very careful tightrope. Deploying all his powers he negotiated his way through the minefield and emerged with a slight advantage. Maybe he missed a win, but it was very hard to see. A draw was agreed – Hammer on the scoreboard at 0.5-0.5

Wily on board 2 as usual went for it in an equal position. It is his uncompromising approach that has won many a battle for Hammer. Unfortunately, this can sometimes backfire and sadly this was the case in this encounter. From an equal position, Wily over pressed, lost a pawn, tried to complicate and sadly went down in a blaze of glory. Hammer trailing at 0.5-1.5

Board 3 next with Loco in sparkling form and determined to start noticing some wins for Hammer 1 – he duly did so and deservedly won in fine style. Hammer now level at 1.5-1.5

Both Forza’s and Brexit’s games are adjourned with the former in the ascendancy where cannot lose but hopefully enough to press for a win. Our Jezza, aka Brexit, is an exchange down but in a very blocked position he seems confident of holding it.

On board 5 Spock played very correctly and precisely as is his way. He comfortably held an edge but not enough to turn into a deserved win. Hammer still level at 2-2

Matteo had a tough night and ended up in a position where it was difficult to develop both his Q-side Rook and Bishop. Chess is hard enough, but when two of your pieces are not participating it makes it way harder. Despite tenacious defence, he was always struggling and when he resigned the position was just untenable. Hammer now down a point at 2-3

The next two boards saw excellent Hammer wins when both Dead-Eye and the debutant Talent, played excellent games.

Dead-Eye continued his sparkling form with an endgame study-like win against Battersea stalwart Emil. This was a masterful performance from Dead-Eye and although he had to wait for a long overdue resignation, the win was never in doubt. Hammer level at 3-3

The Talent is definitely the real deal and played an excellent debut game against his opponent, and although there were some iffy moments the restful was always going to go his way. Hammer now surging at 4-3

Lastly to Clueless on board 10. This was a case of snatching a draw from the jaws of victory. A nice knight retreat won me the exchange, but then my yo-yo form of this season took over and I failed to prosecute my advantage. So frustrating and particularly as this would have practically guaranteed victory on the night.

So, the current score is 4.5-3.5 in Hammer’s favour with two games to be decided. The worst Hammer can do is draw, and even the half a match point we would get, will keep us firmly on course. Obviously, victory by either Forza or Brexit (of the right variety) would be the more desired outcome!! 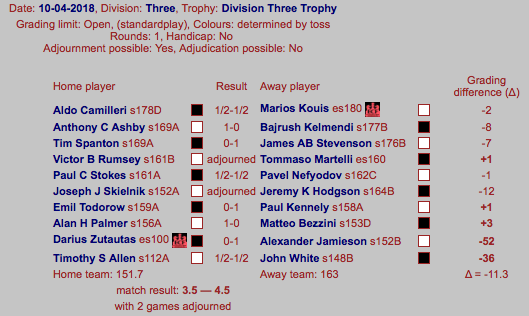 Hammer beamed down again for the second match against Battersea 3, a week later. Again, it was all change as Clueless rung the changes in an effort to score a decisive blow.

The Talent and Clueless stood down, and Thomas (T-Bone) and Nadhmi (The Gift) took up the cudgels and prepared to fight for Hammer honour.

This was a very different affair with Hammer ending the night at 9-0 up with one game adjourned. An almost Fischer-like performance with a win rush of epic proportions.

T-Bone playing white utilised his usual Kings Indian Samisch variation with Q-side castling, sacked a pawn on the queen side and then marched his major pieces to the King side and launched a heavy assault down the g and h-files. In the end the overwhelming forces deployed were just too powerful. The first of the glorious nine was secured.

On board two Zeus, in the last game to finish, pressed with the black pieces and went to the limit in striving for a win. I can reveal he has offered his opponent a draw in the adjourned position. We await developments, but for the purposes of this blog I will take it as a draw. Hammer steady at 1.5-0.5 to the good.

That was the only respite granted to our opponents with Hammer in devastating form and totally in the groove.

Loco at anytime is a formidable opponent. With the hits pieces against a French defence with space advantage and an open file, unstoppable. This was risk-free chess with the capture of a couple of pawns along the way. In the end, resignation was his opponents only viable option. Win number 2.

Wily conjured a win from a position where most of us would accept a draw. He deliberately went into a rook pawn endgame which he released he would hold the edge. He probed and manoeuvred tirelessly with both logic and subtlety. Eventually he achieved a passed pawn on the Q-side – this was the decisive moment. How he achieved it, only God and Wily knows, especially when this pawn was opposed by three pawns. I have called it Kosovan voodoo in the past and ask you to come up with a better term. Hammer leap ahead 3.5-0.5

Forza is not only a Caruana doppelgänger, but is starting to play like the WCC Challenger! His style is so smooth with his classic idiosyncrasy of taking about 80% of his allowed time over the first fifteen moves. He then speeds up and moves in for the kill. He always seeks to take his opponent out of normal lines and forcing them to rely on their talent rather than memory. This is a deadly skill. Facing a Scandinavian response to his initial e4 he found a variation that forced his opponent to start thinking from about move 4.

Forza then launched a pawn storm against the black king on the Q-side, that was so powerful, it led to a swift and fully-merited win.

Spock scored his win through forceful and dynamic play. he trapped the white king int he centre and then netted a rook for a bishop. His opponent was clearly demoralised and overlooked a tactic that would have ended in mate or the giving up of the second rook. An excellent performance – Hammer soaring at 5.5-0.5 to the good.

Next up was Brexit. He set a clever trap that saw his opponent surrender his queen for rook and minor piece. The rest of the game saw consolidation and mopping-up in full flow. A real Brexit job and almost welcome victory.

On board 8, Dead-Eye continued his devastating form of the season – his poor opponent Arnold had no answer to a tactical blow that yielded a pawn. A second pawn fell and as Dead-Eye relentlessly improved his position, Arnold called time and Hammer moved to Warp One at 7.5-0.5

The last two Hammer gauchos could not wait to join the landslide party.

Matteo was in fine fettle. He played a positional masterpiece with the black king imprisoning his rook on h8. Further indignity was inflicted with a bishop on h6 imprisoning the king and a passed pawn on d6 supported by a rook on d1 and the second rook on e1 and an open file. Back rank mates abounded and his opponent realised the cause was futile. Hammer at Warp 5 and 8.5-0.5

Returning to the Hammer colours on board 10 saw the Gift playing his second game for Hammer 1. Playing with the black pieces he simply built an unstoppable king-side attack that yielded a passed pawn that marched all the way to g2. This paralysed the white king, rook and knight he had to stop this monster from queening. The Gift then switched his king to mopping up the remaining white pawns. This was dominating chess and he graciously accepted the white flag and moved Hammer to Warp Speed 9.5 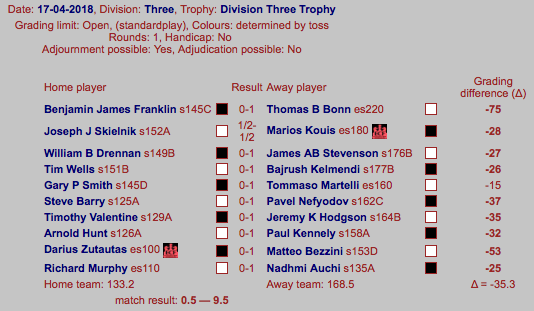 A hugely impressive night by the Hammer Crew. A result that will not be forgotten for a long time by our noisy – but excellent – neighbours. Clueless is reaching zen level – inner peace is within touching distance.

My thanks and congratulations to the Hammer heroes who really grabbed the moment in both matches.

Four games to go until mission end and Hammer are in charge of their own destiny. Next up are Albany on the 30th April and Clueless will be mailing out shortly.

Hammer 1 are the new definition of Mean Machine.

Here for your delight is the current League 3 table:

An ecstatic Clueless over & out!