GM Lectures, Blitz Tourney, Rapidplay, and many, many games of chess – it has been a busy few weeks on Planet Hammer. We have a few results to update you on, so please read on…

In a scene redolent of countless westerns, there was an ambush last night where the Anvil Boyz were cruelly cut down by the Brixton Gang. Just through the swing doors, in the crowded scene of the Sit or Die Saloon, fist fights, drunken cavorting and knife stabbings were common place, especially at the bar.

First to go was Ben on board 3. He started humbly, almost modestly, adopting a Hedgehog posture, but quickly gained equality and looked good to win, hoping to surprise his opponent.

But suddenly, with two weapons drawn each – Queen and Rook – Ben fell to razor-edged tactics, and in the dying seconds, Ben succumbed to trickery of the Devil (back row mate, or give up house and home).

In equal measure shortly after, Simon on Board 2 was cut down. Some say it was a Sicilian Stiletto that undid him.

Last man standing was Robin, Anvil Chief Spiceman and bottle washer, who staggered out of the saloon but then stumbled and was carried to the Adjournment Hostelry, where he died, by turns cursing and mumbling.

The next morning three bodies were thrown in the nearest gulch, only the cruel east wind witnessed their burial. In minutes, spumes of snow tendrils covered the bodies.

Only one of the Anvil Boyz lived to tell the tale, top wrangler Brian, who saw the plot and bade peace early on with his counterpart, shaking his hand as he withdrew.

“I was black v a 138 opponent who played the Trompovsky Attack (1.d4 Nf6 2.Bg5). I went ahead with fianchettoing the KB, and he immediately swapped bishop for knight on f6 to double my pawns.

I played c5 in a Grunfeld-style attempt to undermine his central pawns, pressurizing d4 with my QN on f6. He advanced to d5, which cramped my Queen’s-side development and pushed my knight to a precarious e5, but allowed my KB lots of pressure on the long diagonal, supported by Qa5.

He developed carefully with connected knights on c3 and e2, then pushed away my e5 knight with f4, foregoing castling and escaping central pressure by relocating his king to f2.

I threatened to make a break along the e-file, but he solidified the support of his backward e-pawn with rook, bishop, knight and queen. As the queens-side pawn structure had by now become locked, he offered a draw and I accepted.” 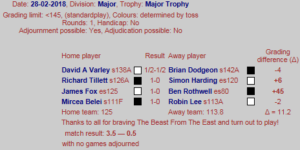 As you can see from the table, Kingston have been relegated. Now it’s between Ealing A and Surbiton B for the drop, with Ealing having better chances since they need just one more point from their remaining 3 matches.

I’d like to thank all Hammers who have contributed to our great results this season. We have secured our Division 1 presence with 5 games in hand. So we are in a neck & neck race with Richmond for third place.

Richmond have a better set of fixtures than us, so our home match against them no 16th April is hugely important.

We are also playing in the Thames Valley Cup Semi-Final against Richmond on 9th April, and a win could see us well on our way to being cup winners, since the other semi-final is between Harrow and Kingston!

The good news from a couple of days ago – Kingston and Surbiton B have played their next match and we are clear of relegation! Now we are playing for a better position in the table.

Realistically we should finish 3rd, but anything is possible. Since all the top teams are playing each other and Wimbledon A play Surbiton B twice (first match is on March 15th). Richmond also have to play all the top teams once, including us. We only have one away match against Wimbledon A on 19th March. All our other matches are at home.

So let’s prepare the March stage for the Hammers:

“Back in the Saddle Again”

Last week we brought you great news from London Division 4 in the way of our 5.5-2.5 win over promotion hopefuls Lewisham. We can now bring you the full report of the match that puts us back in the hunt at the top of the table.

Brian, acting as captain for the evening, talks us through the action as it happened. 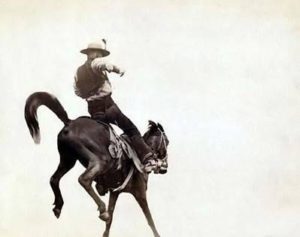 First to finish was Gokhan on board 4. An inaccuracy in his opening line gave him an early advantage and sadly his position didn’t recover. His opponent quickly pushed home his edge to a won game. 0-1 down.

My game was next to finish on board 4. I had white in a c3 Sicilian, where after the pawn exchanges on d4, my opponent played Bb4+ and I ventured a slightly risky Nc3 and Bc4, leaving my e5 pawn vulnerable to his King’s knight. My pin on Bg5 was immediately released with the clever Qa5, exerting double pressure on the c3 knight and threatening a dangerous forking check.

A tense double-edged struggle ensued when I castled out of trouble and took his f6 knight as he took mine on c3. Upshot was a won pawn at the expense of his opened-up kingside pawn structure.

His decision to delay castling proved costly: swapping two pairs of minor pieces, I broke up his central pawn mass, chased his Queen and invaded with a rook via c7. The follow-up queen check on c6 left him powerless to avoid a back-rank mate on move 21. 1-1 and all square.

John was next to finish. He stepped in at the last minute to fill a gap on Board 6, but lost material against a player graded thirty points higher, eventually losing to a crushing attack. 1-2 down.

Charlie’s position on Board 7 looked unfavourable going into the endgame, with his opponent having an extra passed pawn. But Charlie never gives up, and succeeded in swapping off all the pawns to a drawn ending Rook & King v Rook & King. 1.5-2.5

Nadhmi on Board 5 had a complex game where at one stage he was a rook up for three distinctly menacing pawns. Later it was a bishop for two pawns, then an ending of bishop, rook & two pawns v rook and three pawns. Time was tight, but Nadhmi survived the rigors of the clock and emerged with king, bishop, rook and pawn against king and rook, whence his opponent resigned.

At this point the match was delicately poised 2.5-2.5, with Boards 1, 2 and 8 still to finish. Wyatt had been a piece down, but his opponent used a lot time and blundered the piece back again. Wyatt still had to defend against a push of two advanced pawns supported by rooks, but the opponent’s flag fell and Wyatt won on time.

Hammer held a 3.5-2.5 advantage with the top two boards to finish. Both had been tight games played solidly and accurately on both sides, with John White on Board 2 having to defend against minor piece incursions, holding a rook for bishop and knight. But he eventually prevailed after multiple piece exchanges when his opponent overlooked damaging forks with mating threats in a queen & rook ending.

Finally, Matteo on Board 1 invaded his opponent’s 7th rank to force resignation after the tightest strategic game of the evening. A very creditable win for the underdogs! 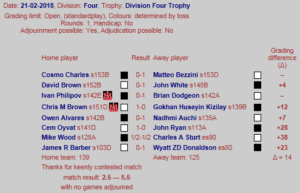