Yes, the calendar year of activity finished at The Anvil on Monday night and we went out with a moderately-sized bang, and definitely not a whimper.

Our Christmas finale was the first leg in the Handicapped Blitz trilogy of tournaments this season. Named after our late Chairman, the Tourney has always provided the perfect Christmas send-off for Hammerites to go off and enjoy the festive season.

This is chess played at its most furious and basic level. No quarter given and none asked for – it is when all members are equal as the time handicap ensures a level(ish) playing field.

Traditionally the format is so suited to the playing approach of our illustrious Chairman – Wily – he invariably tops the hustings. Balls of Steel chess are perfect in this environment. Would he triumph again?

The scene is set, so let’s look at the evening…

Before reporting on the events of the night, I think it’s fair that we continue the designation of nicknames for those with no name. Adding to the roll of honour:

There is also a re-designation. More may follow later in the year:

There were four preliminary groups rather originally named as Groups 1, 2, 3 and 4. Four players were placed into each group:

Cunningly, the harassed tournament controller had put a strong player in each of the groups. With that sort of planning why isn’t he running the country, I hear you ask – answers please are needed!

The top two from each group would go through to the knock-out, whilst the best of the rest would fight for the minor places.

The beauty of chess – and especially handicapped chess – is that it can occasionally send you a curve ball. For example, last week Kiev making his debut for Hammer 1 in the Middlesex League beat an opponent who was graded 50+ points above him – a stellar performance and a most welcomed and unexpected result. A definite curve ball.

Caissa was at it again in the group stages.

Wily lost to Eco-Prof, Zeus succumbed to Dead-Eye, and Clueless got annihilated and taken out by Hitman.

In an intense hour of blitz chess, the following souls were left standing and had earned the right to progress to the knock-out stages:

There were two heavyweight clashes with Zeus taking out T-Bone and Wily beating the Great Dane. The latter was gutted as he was definitely better, but the Balls of Steel King would just not go down.

The other two quarter-finals saw wins for Hitman and Dead-Eye. The former dispatching Eco-Prof and the latter Bond. Dead-Eye definitely has the air of a man with Blofeld tendencies. Hitman was playing outstanding blitz chess using one of his strongest weapons – his time advantage – to full effect.

The semi-finals saw those two old protagonists Wily and Dead-Eye cross swords again – they have met many times over the years. This time it was Wily’s turn to triumph and again he turned an iffy position into a win – his Houdini magic was flowing.

In the other clash Hitman carried on with the approach that had served him so well. Zeus, despite being a Rook up lost to that most relentless of enemies – Time. Hitman had done it.

A final to savour: Wily vs The Hitman. The old against the new. So many questions to be answered. Could the ultra-lightning solid chess of Hitman ruin the continued reign of Wily?

I have to confess at one stage I thought yes – Hitman moved quickly and logically, dealing with the usual Wily setup of c4, d3, e4, with g4 and h4 in motion. Things were looking promising for the Hitman until he allowed his Knight to be pinned on h7. Wily sensed blood and although there was a rescue move, the Hitman did not find it. A piece to the good, Wily swapped off all the major pieces, started hoovering up pawns and then forced a passed pawn.

The Hitman graciously conceded and Wily once again emerged the winner.

A great recovery after the early reversal at the hands of Eco-Prof.

The full results were as follows: 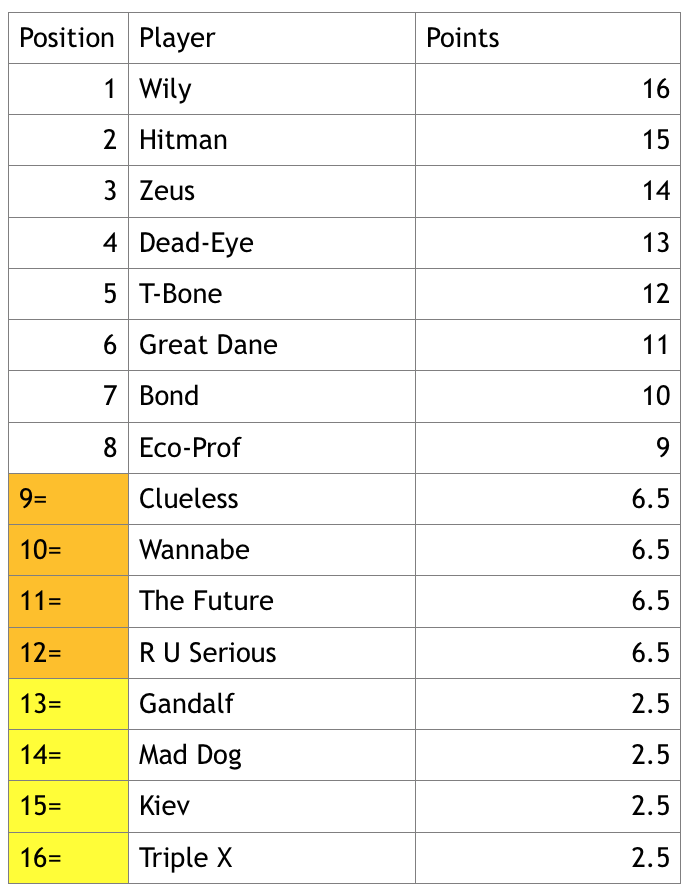 The club were also treated to the usual snacks and drinks (alcoholic and non-alcoholic) delights by our generous Chairman.

A cracking good time was had by all and roll on the next instalment – pencilled in for March.

Remember, it is your two best scores in the three rounds that count towards the final result. So there is still time to stop the march of Wily to another title. The gauntlet has been thrown down – who will pick it up?

Merry Christmas to all Hammerites!