With a mere three games of chess this week just gone, it has been somewhat quieter than usual on Planet Hammer. However, we’ve got some exciting events in the pipeline – read on to find out more.

“Harrow Humbled” – Less than two weeks after we suffered a cruel defeat at the hands of Harrow, we found ourselves playing them again. This time we were hosting the match at Lytton Hall (aka, “The Anvil“), determined to dish out a large portion of ice-cold revenge.

New junior member Alexander was sat down on board one. He dispatched his opponent with relative ease, obtaining a strategically won position in the middlegame. We hope to have Alexander back again soon; he’s a very promising talent who could soon be clocking up wins for the firsts.

Brian had the white pieces on board two. Against a somewhat lower graded player he was disappointed not to find a way to break through, settling for a draw as the night drew to a close.

Pouya was next up on board three, attaining another win to build on a strong debut season. This time Pouya decided to simplify the position after winning a pawn, confident of his endgame ability to convert the advantage.

By his own admission it was Dipender’s worst game of the season. The fact that he won anyway shows how talented this man is (see: Mr Dipenderble)!! Granted, it was slightly gifted to him by a series of blunders from his opponent, but Dipender now joins John Ryan as a leading player for the team, with two wins out of two.

Simon played a fine game to pick up another victory on board five. He won a pawn in the middlegame and a cheeky tactic on the final move led to a slightly premature resignation.

Charlie made his debut for the team on board six. It was a game of blunders, but fortunately for Charlie he made fewer than his opponent and sealed the win.

Dan was up against the same opponent he had lost to the week before. This time he played much better, winning the bishop pair and a commanding lead in the endgame. With victory almost in his pocket, Dan slipped up, allowing his opponent’s bishop to enter the game and mop up his pawns. Dan had to concede a frustrating defeat.

Last but not least, newbie and crowd favourite Nadim was playing on board eight, still looking for his first win for the club. He found that win in style, combining attack and defence well, eventually giving mate on the board.

The win puts us top of the table, but with more games played than the others, and our toughest fixtures still to come.

We play Ealing on Monday, where another win is very much on the cards.

In a tough tussle against Wanstead, Hammersmith Hedger are 2-1 up with 1 game adjourned. Captain Mike Mackenzie gives us the rundown:

Board 1: Simon Harding – A nice win by Simon playing the black pieces. He is certainly cementing his place on board 1.

Board 2: Robin Lee – Robin adjourned material down, but in this position Robin has good drawing chances.

Board 3: Nick Rutherford – Nick with the black pieces played a conservative game but was outgunned and came away with a defeat.

Board 4: Dan Rugman – A very difficult game for both players due to the fact they had to play in an adjoining room that was open to the guests of the hotel. Dan, although distracted by the noise, played an excellent winning game.

Next up for the Division 6 Hedger team: Morley College on November 24

As regulars will know, the BBCA Rapidplay is one of the best London tournaments for club players, offering a friendly welcome, some great chess and – more importantly – some amazing prizes! 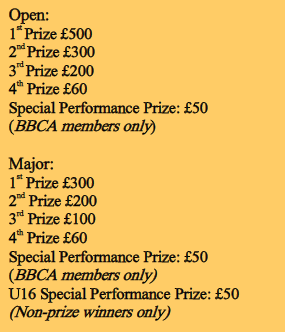 It’s a seven-round Swiss format competition, with 15 minutes of time control per player (no increment). Entry is £20, with the action kicking off at 11am at the London Enterprise Academy, 81-91 Commercial Road – E1 1RD.

Hammersmith players have attended in previous years and it comes highly recommended!

Further information – including registration details – are available at www.britishbanglachess.com

And any queries or further information can be obtained by emailing: bbcarapidplay@gmail.com

Some dates for your diaries – following on from some hugely successful events this year, we have penciled in the following activities next year. Please save the dates!

And Finally… Rapidplay Round II

A reminder – if you’re taking part in our Rapidplay tournament this season, the pairings for Round II were announced last week.

The onus is now on individuals to arrange the next game with their opponent. Just remember, it needs to be completed by the end of November & the tournament controllers notified of the result.

Any questions or queries, please contact Adam or Dave: