23.10.17 – The Hammer Rapidplay Tournament is off to a flying start! 22 players descended on Lytton Hall this Monday to take part in the first round. Two are still to play next week, with a handful taking first round byes. 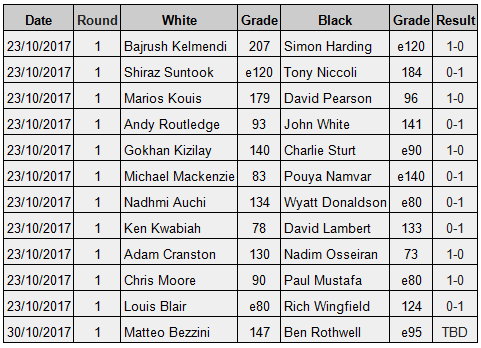 As is often the case with open Swiss tournaments, the first round threw up a few mismatches. Still, very few games finished early and the underdogs provided some scares – and the occasional result.

Board 2 saw Shiraz paired against second seed Tony Niccoli. Both had suffered tough losses the week before, so form dictated that the game wouldn’t be of the highest quality.

However, both pulled off a very fine display. In a Symmetrical English Opening, Shiraz caused real problems with the white pieces, but ultimately his light-square weaknesses proved too costly. He provides an insightful analysis of the game:

On board 4 it was up to our esteemed Webmaster General, Andy to attempt to take out first team captain John “Useless” White. He played a great game, with John on the ropes for most of it – and apparently with an unseen winnable combination – before endgame technique sealed the win for John on move 38.

Performance of the night however, has to go to new member Wyatt “The Wizard of Oz” Donaldson. His opponent, 9 year old Nadhmi, has become a force to be reckoned with of late – there are very few who’d want to take him on with the black pieces.

That task was Wyatt’s on Monday, who takes us through their game, where he showed excellent technique to dismantle Nadhmi in the endgame.

Round 2 will surely throw up some juicy pairings, with the big (and small) guns starting to square off against each other.

The pairings go out on November 1st – and from now on it will be necessary for players to arrange their own games each month.