26.06.17 – The Albion Public House – Yes, the first training night of the Summer Program was delivered this Monday just gone by Clueless (aka. John White) – not a nickname to fill you with confidence – at our temporary Summer residence, The Albion.

The theme of my training session was to look at the following points, and what part they play in a chess contest:

Using an illustrative game of mine, from just over two years ago, played against Ealing 2, I hoped to explore all of these themes. Please note, I will only examine the line played. You can have fun with all the variations and the what-ifs!

One caveat to all of this is my own ability as a chess player. I can probably calculate three moves deep on a good day, but due to the amount of chess I have played I do have some feel for what is the right move in any given position.

We join the game just as White, my opponent, had to seal his move.

Some background to the encounter which may explain some of the comments through the analysis:

To the game, and I will supplement the move analysis with my thoughts at the time. The critical action took place over about 15 moves. 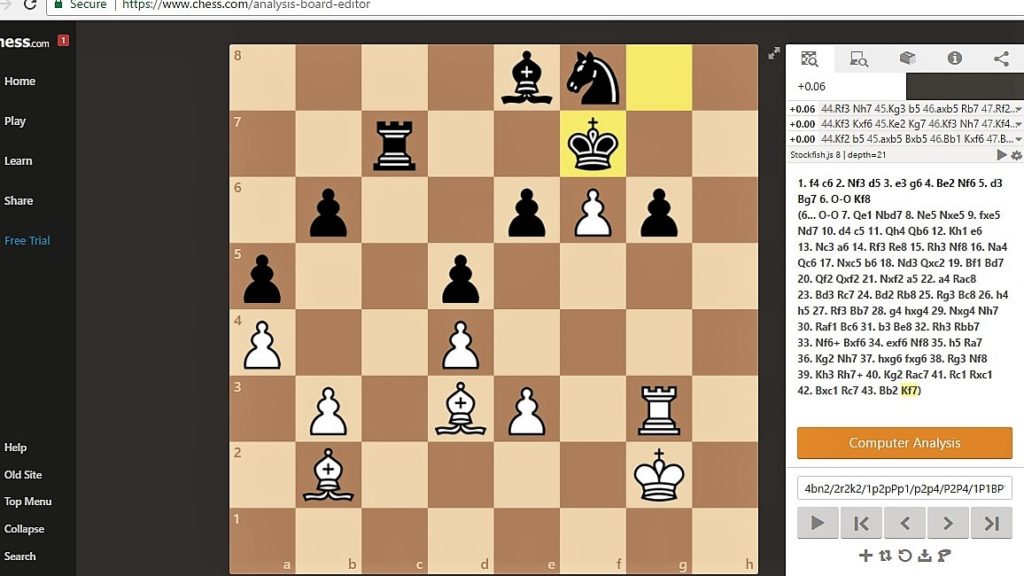 White sealed Rh3 – I was relieved when it was played on the board. I was dreading Ba3 and a subsequent BxN. At this stage I deliberately waited 10 minutes before playing my next move, KxP. I wanted it to appear I was shocked by his move.

He immediately banged out Kg3. Again, I took my time and thought for 20 minutes – this was part deliberate, as well as part trying to figure out what to play. I knew he was not playing his researched line, and I wanted to find something he and his engine had not considered.

I reasoned that I wanted to keep as many pieces for now on the board, activate my pieces and prevent penetration by his Rook. The move I played, which I found at the board, allowed this to happen. I played Bf7. I played it with supreme confidence to rattle him. A bit of chess psychology.

He visibly started; my ruse had worked. He thought for a while and continued with his original plan. Kg4 was played.

I responded with Kg7 to prevent any Rook penetration along the h-file.

He then banged out Ba3 – if you put it in the engines a mistake. I immediately played Nd7.

His response was to play Bd6 to which I replied Rc3 and for the first time I felt the initiative had changed hands. He played Bb5 and I instantly replied Nf6+. I had achieved my goals set out when I played Bf7.

This is where the tactics started with any King move other than Kf3 allowing a juicy Knight fork. He retreated with said move and I followed up with g5, threatening g4+ and picking up the Rook. He retreated his King to g2. Check out the move options for white here.

I now felt slightly sadistic by playing Rc2+, driving him back to the first Rank. He played Kf1. Now consider the position – whose King has more space and whose pieces have real targets, and how vulnerable is White’s Queenside? Quite a transformation, and all in the space of 9 moves.

In the next few moves the minor pieces were swapped off and White picked up the g-pawn. However, the commanding position of the Black King and the vulnerability of the White Queenside pawns decided matters in favour of myself.

My opponent resigned many moves later – he did not shake hands and was totally bemused. He was beaten psychologically as he could not adjust to the change in events. 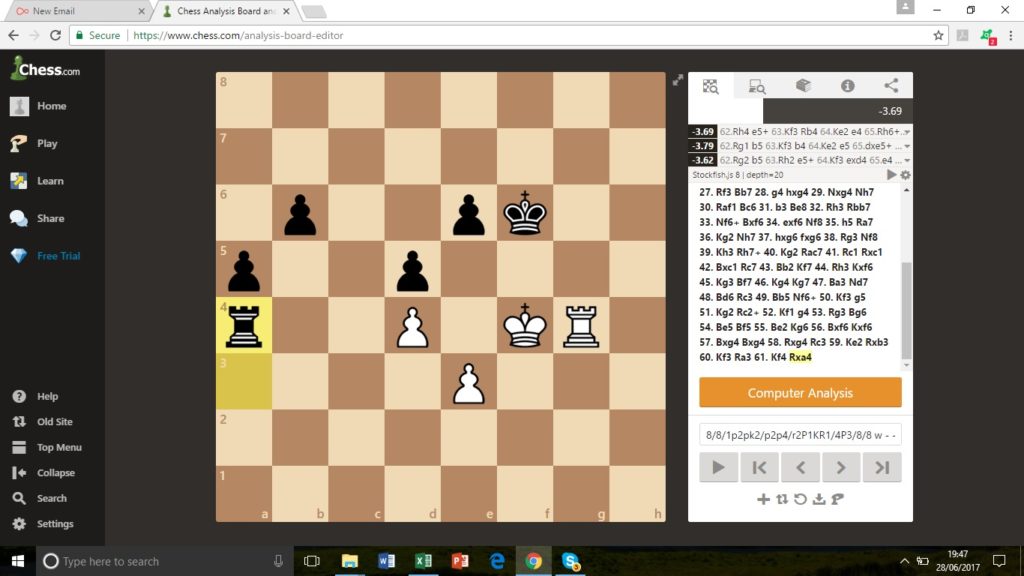 All I can say is that revenge is a dish best served cold.

This small section of the game decided matters and demonstrates all of the above themes.

The use of psychology to unsettle your opponent. Doing something out of the ordinary.

On a personal note, I find it unbelievable that we still allow adjournments in UK League Chess. In these days, when everybody is time precious, the extra costs involved and the use of chess programs makes the continued employment of the adjournment option ludicrous. I fervently believe this is the overwhelming view of most league chess players. We are being held back by a vociferous minority!

We have to get with the times!!