As the regular chess season draws to a close and the AGM becomes a hazy memory, don’t panic!! – there’s plenty of chess action still to come.

We are very, very excited to announce the launch of our first full Summer programme. It’s a jam-packed agenda of games, events, and even a pub crawl! Read on to find out the details.

A Triumphant Return to The Albion

First things first, don’t forget that our Lytton Hall venue is now closed for the Summer months. Hammersmith Chess Club de-camps a short distance to the Albion public house for our Monday Club Nights, a short walk away on Hammersmith Road.

The kind folks at the Albion allow us to use the upstairs function room/area, so there’s always plenty of space for chess.

After much hard work, many meetings & dozens of emails, we are ridiculously pleased & excited to announce the launch of the inaugural Summer Chess League!

It all kicks off on Tuesday 13th June at 7.30pm at the home venue of our good friends Battersea – full details here. It’s an opportunity to hear a few details about the league setup, meet the other teams, all punctuated with a presentation from the Ginger GM Simon Williams and his good friend IM Simon Ansell, and of course some of the cheapest beers in London (thank you Battersea Labour Club!). Simon’s presentation will be followed by an open blitz tournament – everybody is welcome!

The Summer League is a fantastic new idea, following hot on the heels of our successful double-header which we played (and won – natch) against Battersea last Summer where we got out a WHOPPING 27 boards across two evenings. This year we have managed to rope in 4 clubs – Battersea, Streatham & Brixton, British Bangla Chess Association, and your very own Hammer, to create a competitive mini league. 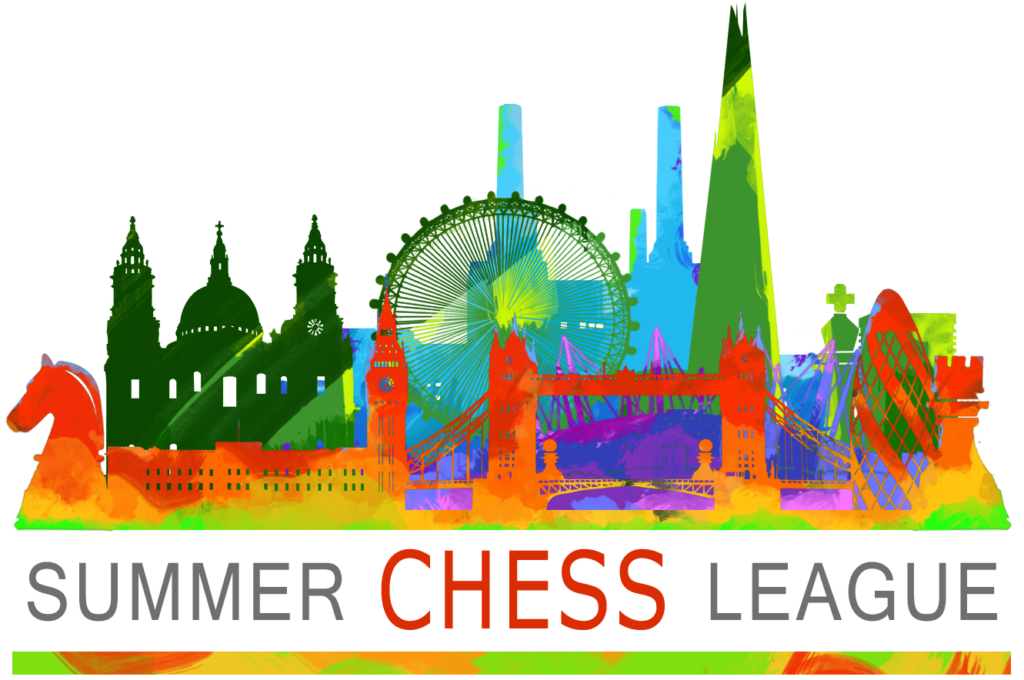 With ourselves and Battersea putting out two teams each, there’ll be 6 teams in total, with five match nights as follows:

All games will be played at Battersea’s home venue on Falcon Road (walkable from Clapham Junction). Game timings will be 60 minutes with a 30 second increment per move, and no adjournments. All games to be graded and completed on the evening. Couldn’t be easier!

Full details of the venue, dates, contacts etc. can be found on the excellent website – please check it out:

We’ll shortly be contacting all members to get our teams sorted – look out for the emails. And if the league proves successful this year, who knows where it may lead!

The Summer Program In Full!

As if that wasn’t enough, we’ve also been hard at work compiling a full program of events for our Summer club nights and other dates in between.

After a hugely successful year for the club we are keen to extend the season into the Summer. In addition to the Summer League, there’ll be something happening every Monday – all sessions will take place upstairs at the Albion unless otherwise mentioned. Enjoy!

Training – 26/06, 17/07, 07/08, 04/09
We plan to conduct four training sessions throughout the Summer, using the big demo board. Get your ideas and suggestions in for what you want to learn, or games you’ve played that you’d like one of our talented trainers to analyse and run through.

Cafe Nero Invasion – 10/07, 24/07, 21/08
There is a healthy contingent that plays chess in the Cafe Nero on Kensington High Street every Monday. Let’s invade the cafe and show them how Hammer play chess! When we’ve had enough caffeine we can retire to the Albion for more chess and a few cold beverages! We did a quick hit here last Summer and it was ace!

Teams Rapidplay – 03/07
Attendees will be split into four teams of roughly equal strength. Each team plays one ungraded 20 minute rapidly match against each other team. Most match points determines the winning team on the night!

Graded Rapidplay – 14/08
Each attendee will play two 30-minute Rapidplay games against two players of roughly equal strength. Everyone will get one game as White and one as Black. Games will be played under match conditions and sent for grading.

Middlesex League – Kings Head 3 v Hammer (19/06)
Hammer’s final match of the season. It will be played over eight boards upstairs at The Carpenters Arms, 12 Seymour Place, W1H 2DD. Please let me know if you would like a place on the team.

Two 10 minute blitz games in each pub, then move on. Usual points for win, loss and draw, however bonus points awarded for number of drinks consumed! We will give out leaflets and promote the club on the way round.

We’ll be using our new Facebook page to promote and gauge interest for some of these activities. Please start following the page and lookout for updates!

All events are also on our calendar, and will be open to all-comers. If you’re not a member but would like to come along, just drop us a line. We can’t wait!!! 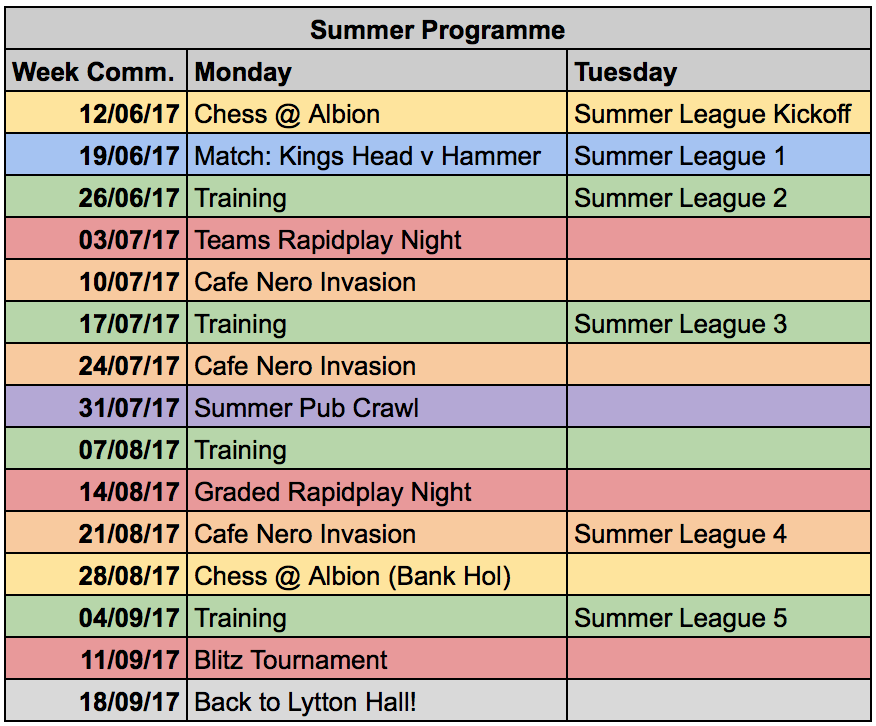