On Monday 6th February 2017 at 7.30pm, seventeen souls – the great & the good – gathered in the hallowed surroundings of Lytton Hall for the third round of our blitz cycle.

This time the ranks were reinforced by three potential new members: Kaan, Alex and Marios. With the addition of James to lower the average age of participants by a good margin! Indeed, I predict James will play a big part in the future of Hammer Chess once his academic studies are put to bed. You read it here first! Not quite the “Future of Rock & Roll” statement assigned to Bruce Springsteen by Jon Landau in 1974, but still…

As usual the chess was fast and furious. There is nothing like 10-minute handicapped chess to bring out the cannibal in the club chess player. It allows the imagination to soar and the entertainment of ridiculous possibilities and moves.

The man everyone was gunning for, and the man with the biggest target on his back, was our WOSF, Bajrush – Chairman and blitz expert. Winner of the first leg and runner-up in the second, he was a marked man. Unfortunately, he had other ideas.

Fischer-like, he mowed down the opposition in his qualifying group, despite having a serious time handicap for every game. He had his business hat on! His place in the knock-out phase never in doubt.

The qualifiers from the other groups were Sheikh, Josue, Matteo, your correspondent, plus the new faces Alex and Marios. The final place was taken by James after a nail-biting winner-takes-all game against Brian.

The knockout phase saw Bajrush, Sheikh, Marios and your correspondent advance to the semi-finals. 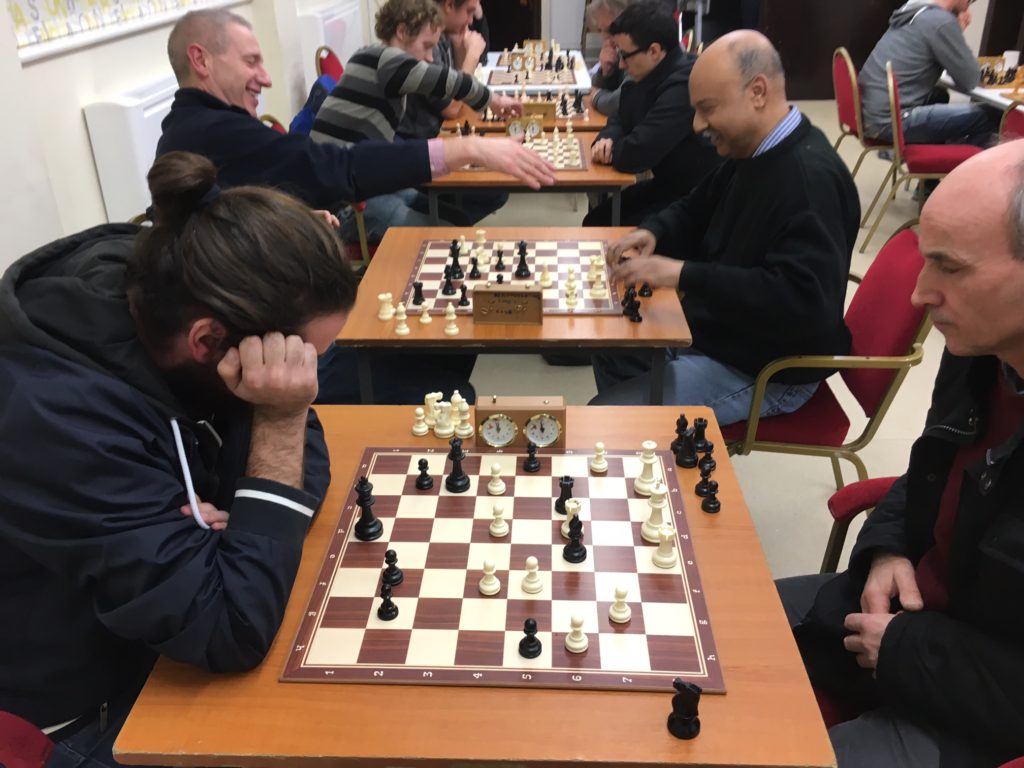 Sheikh totally crushed me and deservedly progressed to the final.

Bajrush had his toughest match of the night against Marios. An amazing game ensued. The final position had two Rooks v Queen and a possible perpetual check. However, our WOSF did not panic and saw his way through all the traps to emerge the winner.

In the play-off for third, Marios won well against your correspondent. A great performance on his debut at the club.

Thus, the roll of honour for the night reads as follows:

In the overall race for the Hammer Blitz Champion, the pecking order is as follows:

One more round to go and the best three scores for each competitor will count.

Well done to all!