On a calm Halloween evening the Hammer TV team took on the might of Surbiton A – one of the powerhouses of Division One.

On paper Hammer were out-graded by average of 13 points per board! A tough ask on the spookiest night of the year.

The portents were not good when our captain Bajrush had to make a late withdrawal. However, the ever- reliable Brian Dodgeon stepped up to the mark.

This meant your correspondent stepped into the captain’s shoes and considering my record in LL 3 this season – this was not a good omen.

First up it was great to welcome Tony Niccoli to the fight. Making his debut for Hammer in league chess on board one. His first game was probably the most complex of the night.

Tony had Rook, Bishop and Pawn for his queen plus all the pressure. However, fine manoeuvring by his opponent broke the bind and the loss became inevitable. Tony fully embraced the fighting spirit of Hammer Chess and hopefully will be rewarded next time.

On second board Carsten in his calm and logical style got a rook for pawn and minor piece. Then demonstrating excellent technique, he converted his advantage. The beer in the Albion later on was very sweet. A really excellent win and the win of the night for Hammer

On boards three, four and six – the Hammer trio of Paul, Sheikh and Safi faced opponents who out-graded them by an average of 21 points. This was a tall order and the three loses did not tell the full story and our boys went down fighting – Sheikh was so close to equalising particularly.

On board eight Brian Dodgeon duly secured an advantage from the opening but could not convert. The draw was the only non-decisive match of the night. Great performance by Brian – after having to step in so late.

Board seven saw Adam play an amazing game in which he initially walked the tightrope in the early stages before gradually assuming a space and activity advantage. The victory was duly secured and another excellent win for Hammer.

Finally, to board five and your correspondents game. This was me playing the black side of a Benoni. The game was adjourned at move 37 with the sealed move played by myself. I have a bishop for three pawns and a space advantage. The computer is working full time to hopefully convert this into a win. Will keep you informed……

So was it a Halloween nightmare for Hammer ?

In my opinion – definitely not. It demonstrates clearly to me that Hammer belong in the top division and we can compete at this level.

Bring on Surbiton B next week !!!! 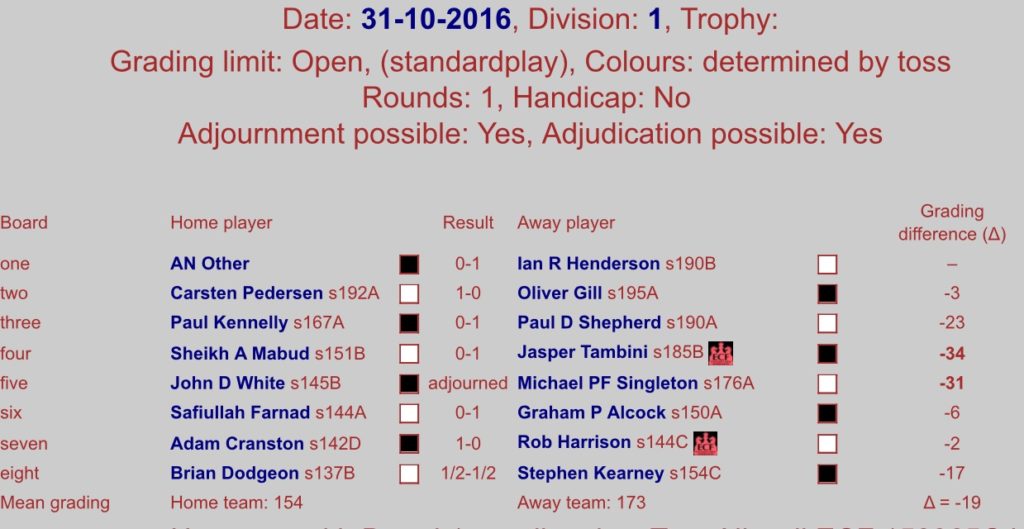