A flurry of activity in May saw the conclusion of most of the leagues we play in, bringing with it a large dollop of success (and a tiny drop of failure) for the Club’s teams!

Monday 2nd May – Club Night
As it was the May Day bank holiday, the Club did not open!

Tuesday 3rd May – Middlesex League Division 2
Ealing 2 v Hammersmith
Unfortunately the penultimate round of games in the Middlesex League brought with it confirmation that Hammersmith are relegated to Division 3 along with Harrow next season. A 5-3 win over Ealing  brought some consolation. The final match is against Kings Head on 16th May.

Friday 6th May – London League Division 4, Second Team
Morley College v Hammersmith
This game completes the Second Team’s campaign for this season. Some consolation is brought by us winning our final game 5-2, with one adjournment. Dave Lambert has captained the side with excellence this year and I’m sure he will look forward to leading the side in 2016/17.

Player of the Season in London League 4, second team is… Brian Dodgeon

Monday 9th May – Club Night
We had a marvellous turn out with 14 members present, including two first-time callers. The theme of the evening was tactics. John White talked through a game of his where some clever tactical play secured him a win. Bajrush then analysed a game of his where he used his own opening “The Steamroller”, winning in short time.

Unfortunately we had no time for the planned blitz tournament so the remainder of the evening was quick fire chess.

Wednesday 11th May – London League 4, First Team
Athenaeum v Hammersmith
A thumping 6-2 win rounded off a great season for the Division 4 first team. We are promoted!!! Well done to John and his team.

Thursday 12th May – London League Division 6
Cavendish v Hammersmith
A clean sweep in our final game saw us finish the season as Champions!! Brilliant well done to all the many players who participated in this league and huge thanks to Dave who took the reigns for this last match.

Player of the season in London League 6 is… David Lambert

Thursday 12th May – Thames Valley League
Harrow v Hammersmith
A fine final win (4.5-2.5) from our Thames Valley side clinched 1st place and we are Champions of Division 2! Promotion to Division 1 is the order of play next season. Many congratulations to Bajrush and his team for this superb effort.

Monday 23rd May – Club Night
A Committee Meeting lasting nearly 2 hours took place. Reports from all Officers were presented in preparation for the AGM. 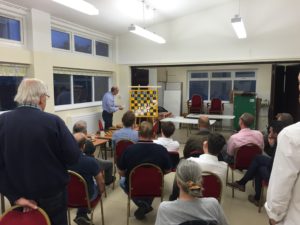 Following this, Bajrush gave another of his game demonstrations using his by now famous “Steamroller” attack. On completion we all enjoyed some blitz chess. Another fantastic turnout with no fewer than 17 members in attendance.

Thursday 26th May – London League Division 5
West London v Hammersmith
Our season in Division 5 ended in a 3-1 defeat. We have had a tough time of it in this league but with a new captain on board for next season and a number of new members, things should soon improve!

Library Evenings and Rota for June
As you may have read previously, we have expanded our Library evenings throughout the Borough and now offer sessions at four different locations. Full details can be found here, but the dates for June are as follows:

If you’d like to help out with running a session please drop us an email. They are short, fun, and you’ll play some crazy chess!

Thank you to all our members and players this season, and to Anda for the great job in running the Library evenings! We now look forward to the AGM and our Summer activities, and a new season of chess in the not-too-distant future!