March was a busy month for the club on all fronts, with eight league games and a couple of events down at the club. Here’s a quick recap:

Monday 29th February – The club took advantage of a match-free evening at our home venue to host another training session run by club Chairman, Bajrush Kelmendi.

The previous week’s session proved a great success and was very well attended, hence we had another good turnout tonight. Opening theory and Endgames were the order of the day, admirably presented by Bajrush. He also covered Pawn structures in depth, passed pawns, isolated and doubled pawns, which was enlightening. Bajrush then shifted to a couple of his own personal games that were good examples of the evenings themes. 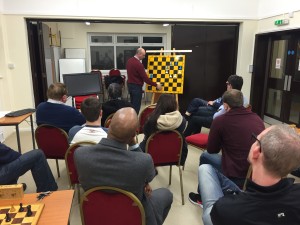 Our Chairman, on closing the event, revealed that he had a special opening of his own creation which he uses against all opponents when playing White. What is it? Well, you’ll have to play him and draw the Black pieces to find out! Members were so impressed with it that one team captain is going to adopt the setup next time he has white!!

I think we need to patent this opening and give it a name. Therefore, anyone that attended the session please think of a suitable name – suggestions in the comments at the bottom of the article, or by email. I will start off by naming it “The Mixed Grill”!! Very suitable I believe.

Monday 7th March – Thames Valley League
Hammersmith A v Hounslow A
This was a thumping win for Hammersmith, 4.5-2.5. The team looks strong in this division too with 3 wins, 3 draws, and just 1 defeat:

Tuesday 8th March – London League Division 6
Hammersmith v Greater London
A nice win from Hammersmith on GLCC’s home turf, 2.5-1.5. We are tied for 1st place in the division with Battersea, who we play on 31st March. Latest position as follows:

Thursday 10th March – London League Division 4, Team 2
Hammersmith v Streatham
Streatham out graded us on all boards by quite a long way. Brian Dodgeon playing board 1 (and as stand-in Captain) was the hero of the night, gaining a very creditable draw with a 164!! There were 2 adjournments and we defaulted board 8. Result 6.5-0.5 in favour of Streatham.

This was followed by a brilliant analytical display from Carsten Pedersen of 3 games submitted by members from the Simultaneous against GM Chris Ward earlier in the year. We had 13 people turn out, full of questions, comments and suggestions for Carsten to answer. 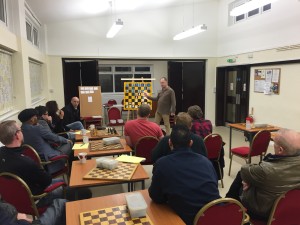 First up was Chris Moore playing the French, with Chris Ward demonstrating why he is a GM! Even Carsten could not save the game in the post-mortem!!

Your author was up next, playing my favoured Modern Benoni opening (which I suggested to the GM I would play if he opened up with 1.d4, which he duly did). I felt I played the opening quite well but Carsten pointed out some weak moves which gave Chris the advantage. From there it was only going to go one way.

Last up was Dave Lambert playing the Nimzo-Indian, an opening Chris has written 3 books on. Dave held his position well making very few bad moves, eventually being forced into retirement – death by a thousand cuts!

Carsten then gave a few useful tips: Prepare for pawn storms when castling on opposite sides; Backward diagonal moves are always hard to foresee; Beware of Alekhine’s cannon – a Queen on d1, a Rook on d2, and another Rook on d3.

A loud round of applause was the order of the day for such a fine display. Well done Carsten! He has requested feedback to assist him with future demonstrations – leave your comments below.

Monday 21st March – Thames Valley League
Wimbledon C v Hammersmith
6 wins from 7 boards for Hammersmith in this game – an excellent result with the last game adjourned. 3 matches remain in the division. If Hammersmith can secure 3 more wins we are guaranteed promotion to Division 1.

Wednesday 23rd March – Middlesex League
West London v Hammermsith
3 games remain this season. Hammermsith secured a nice draw in this game but it doesn’t look like it will be enough to stave off relegation:

Thursday 31st March – London League Division 6
Hammersmith v Battersea
A great win for Hammersmith against our main rivals for the Division title. We now lead the division by a point with 2 games left. This game was on a knife edge at 1.5-1.5, with Dan Rugman’s game to complete. A pawn up, it looked to be heading for an adjournment until Dan unleashed a great mating attack which his opponent fell straight into. With the win on the last board, Hammersmith won the game 2.5-1.5.

Thanks to all players in a busy month of games – good luck with our April fixtures!

Note: subject to change – team captains will confirm in advance